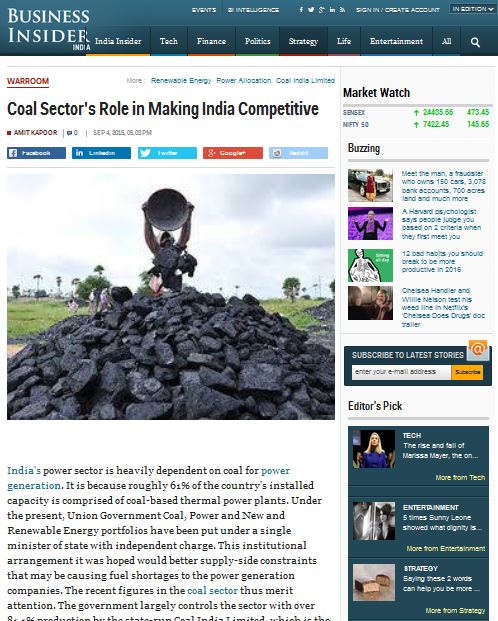 India’s power sector is heavily dependent on coal for power generation. It is because roughly 61% of the country’s installed capacity is comprised of coal-based thermal power plants. Under the present, Union Government Coal, Power and New and Renewable Energy portfolios have been put under a single minister of state with independent charge. This institutional arrangement it was hoped would better supply-side constraints that may be causing fuel shortages to the power generation companies. The recent figures in the coal sector thus merit attention. The government largely controls the sector with over 81.1% production by the state-run Coal India Limited, which is the ‘single largest producer of coal in the world.’

A pertinent question is how successful has been the strategy of an institutional arrangement of putting the three portfolios under a single minister? Has it led to any gains in the coal shortages that were talked about during the previous regime? While it is a difficult to measure the internal functioning of the Ministry, there are two or three proxy ways to look at this. One is to look at figures of the largest producer namely Coal India Limited, which produced 494.24 million in FY 2014. The production has jumped 31.82 million tonnes over 2013 production that stood at 452.21 million tonnes. The production increase is more that the increase that was witnessed from FY 2011 onwards to FY 2014 when production rose from 431.32 million tonnes to 462.42 million tonnes. Thus, the previous year ending in March 2015 saw an increase greater than the previous three years combined. While does this only arise from the institutional arrangement is debatable but the fact remains production has increased massively.

Another point regarding the performance of the coal sector is boosting the private sector’s production capacity in the overall sector and thus introducing some semblance of competition in the sector. It could start with the auctions that are currently underway. The third round of the auctions of the coal blocks came to an end on August 13. The Supreme Court in August 2014 had declared allocations of all 218 coal blocks allocated since 1993 as ‘illegal and arbitrary’. The coal auctions presently can help develop a system where overt dependence on Coal India could lessen over the next 15-20 years. Though Coal India will even then remain a massive producer.

Over the next few years, the government is seen moving towards more production from Coal India as well as trying to auction coal blocks in a transparent way that previous Governments have been proved of not doing. Only the performance in the coming years can tell if India comes closer to the goal of power for all.

Published with Business Insider on September 4,2015.