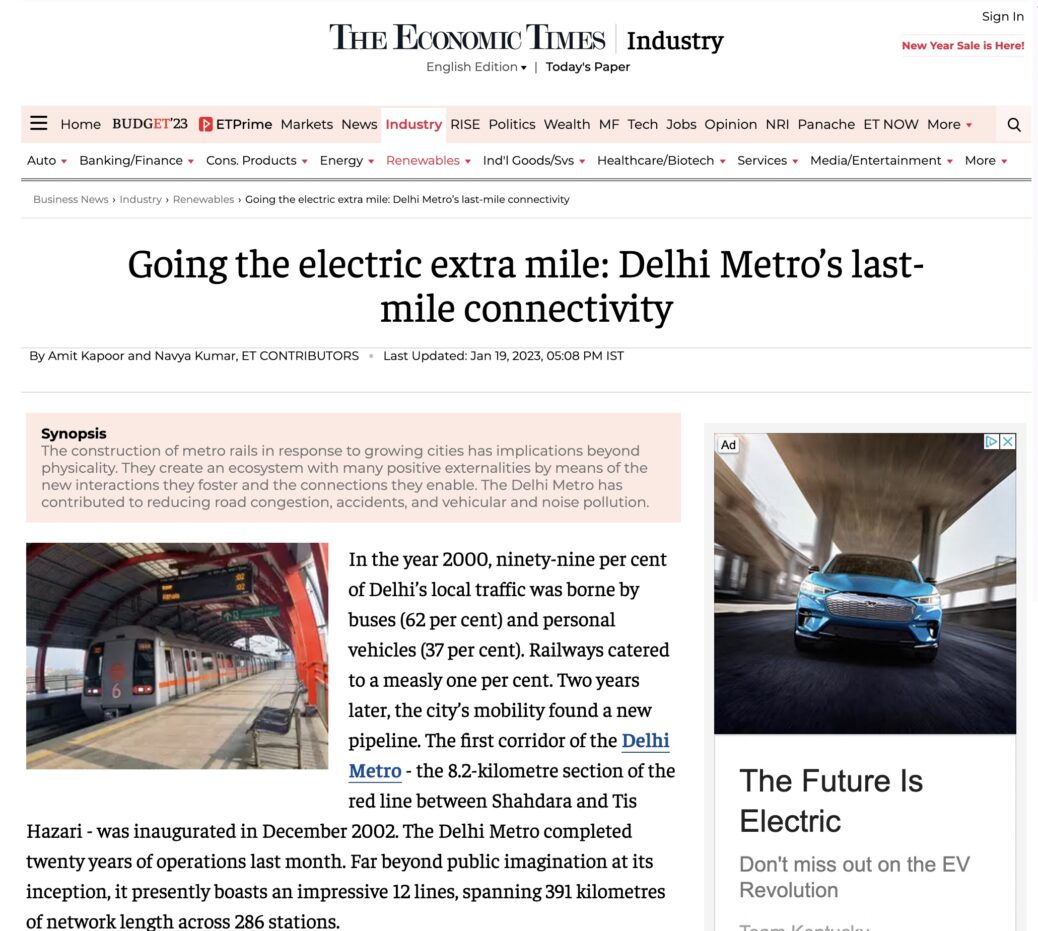 In the year 2000, ninety-nine per cent of Delhi’s local traffic was borne by buses (62 per cent) and personal vehicles (37 per cent). Railways catered to a measly one per cent. Two years later, the city’s mobility found a new pipeline. The first corridor of the Delhi Metro – the 8.2-kilometre section of the red line between Shahdara and Tis Hazari – was inaugurated in December 2002. The Delhi Metro completed twenty years of operations last month. Far beyond public imagination at its inception, it presently boasts an impressive 12 lines, spanning 391 kilometres of network length across 286 stations.

The construction of metro rails in response to growing cities has implications beyond physicality. They create an ecosystem with many positive externalities by means of the new interactions they foster and the connections they enable. The Delhi Metro has contributed to reducing road congestion, accidents, and vehicular and noise pollution. The DMRC was estimated to have helped remove over five lakh vehicles from the streets every day in 2021. In addition, it is the first railway project in the world to claim carbon credits for using braking technology to produce energy.

The Delhi Metro has connected hitherto isolated regions enabling a dispersion of urban sprawl and the emergence of new economic activity hubs. The Energy Research Institute (TERI) estimates that the metro will save passengers an annual 572.5 million hours in 2031. Reliable public transit infrastructure eliminates precarity in daily lives; people know when and how they can reach their workplace, and that they can reach it at all, along with the guarantee of minimum disruptions to this routine. This certainty is all the more valuable for women, who are assured that the vehicle will follow a standard route as opposed to the anxieties of an auto ride where they must constantly beware of suspicious detours.

Notwithstanding these positive spill-overs, public mobility is hardly unaffected by the pandemic-induced lockdowns; the Delhi Metro experienced reduced ridership to 8.78 lakhs in FY 2020-21 from 27.8 lakhs in 2019-20. The DMRC recorded a total comprehensive loss of Rs. 3808.63/- crore in March 2022. Rivalling the competitive financing models of shared rides and taxi services that make door-to-door journeys and hence deliver higher convenience is also a challenge. As the Delhi Metro gradually regains its pre-pandemic ridership levels, last-mile connectivity remains a key area that can determine its future attractiveness.

Many economies are transitioning to e-mobility to decarbonise their transport sectors, achieve national energy security, and promote long-term sustainability in accordance with global climate goals. Petrol and diesel-run vehicles adversely affect public health due to their toxic emissions and are less effective at energy conversion. This effect is especially worrisome in a city like Delhi, which consistently ranks amongst the most polluted cities in the world. At the same time, however, electric vehicles (EVs) come with a capital cost premium – buying them is significantly more expensive than purchasing alternatives. Delhi and India’s wider income disparity makes it a significant bottleneck requiring consideration.

Green infrastructure can be viable for the masses in India only if it is economically viable. Consequently, prioritising electrification of public transport before turning policy focus on private vehicles can act as a pivot to enable India’s energy transition. The benefit of using EVs lies in their long-term operating costs. Mass transit can unlock an advantage of economies of scale; the most use-intensive vehicles will pose a favourable financial balance while also facilitating a paradigm shift in charging infrastructure, eventually making the EV transition smoother for individual users if public charging points are already accessible.

Due to varying considerations and qualities, some vehicle types are more favourable for a transition than others. The World Bank posits that India has a strong case for adopting 2W electric motorbikes, which would generate a life-cycle cost advantage of over 40 per cent in financial terms. The argument for electric buses is only moderately supported. However, both 2Ws and buses are able to reduce negative externalities, such as environmental and air quality concerns, by close to 20 per cent. Buses significantly impact local externalities, making them appealing to Delhi’s case. 4Ws do not yield an important economic advantage still.

There is a strong case for an aggregated procurement strategy when it comes to electric buses. The joint-venture model of the DMRC supports this structure and can enable effective risk-sharing and mitigation across the different levels of government and the private sector. The DMRC recently returned nearly a hundred electric feeder buses to the Delhi Government, stating they were underutilised and accruing costs. This points to the need for a macro and multistakeholder perspective on urban planning, where the last-mile connecting vehicles are not only feeders but their longer routes superimposed in a way where they are readily available near metro stations.

Delhi ranked 11th as the most congested city in the world in 2021. Undoubtedly, the city does not need more cars on its roads. With an integrated and multimodal approach to mass transit systems, middle and lower-income groups who cannot yet afford EVs can still benefit from their reduced operating costs. As last-mile connectivity becomes cheaper, public transport becomes more attractive. Given the positive social and environmental spill-overs that the Delhi Metro generated over the past twenty years, it is pivotal that the imagined electric transportation fleet works in tandem with the existing mass transit infrastructure – not compete with it.

The article was published with Economic Times on January 19, 2023