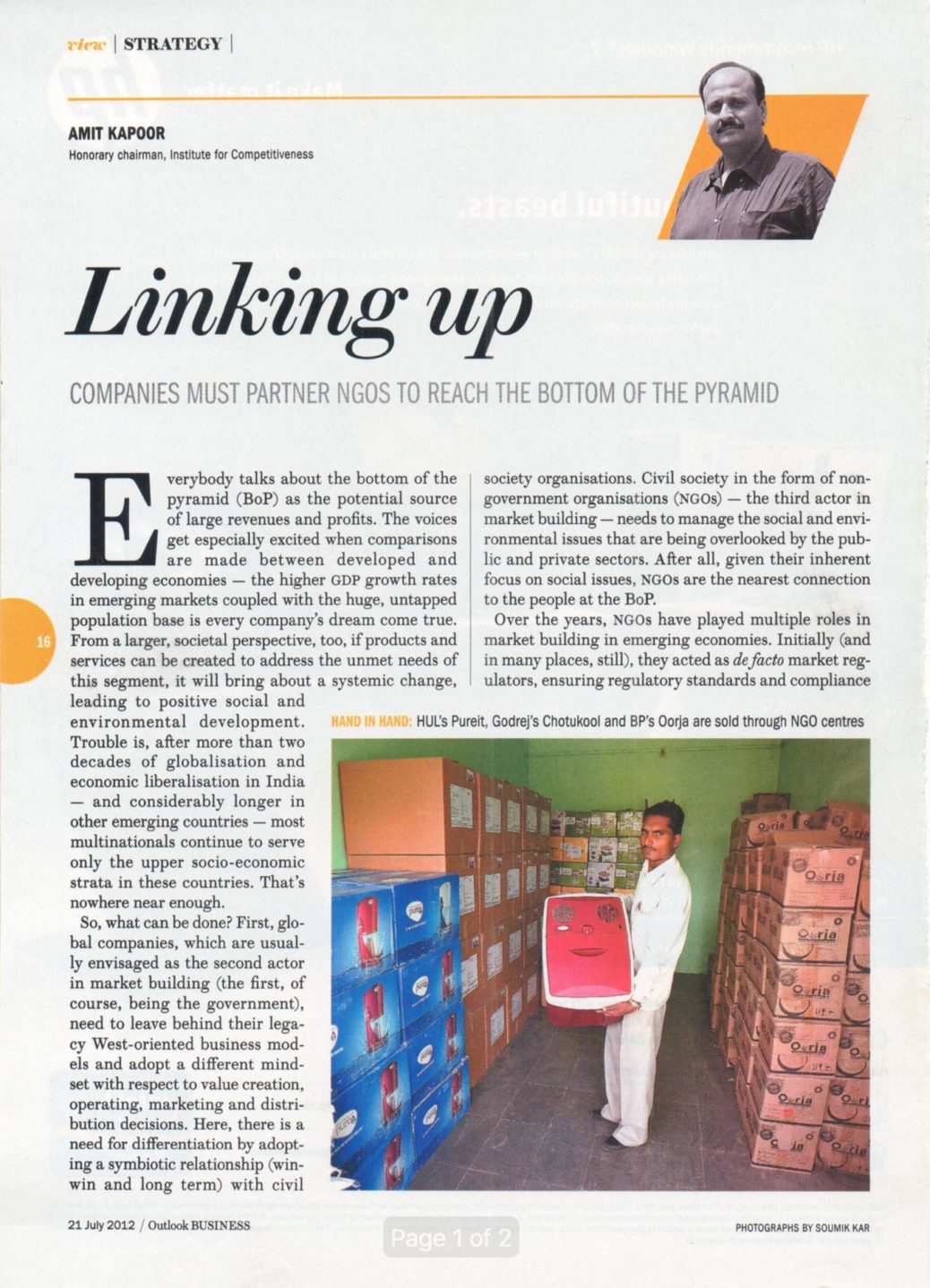 Everybody talks about the bottom of the pyramid (BoP) as the potential source of large revenues and profits. The voices get especially excited when comparisons are made between developed and developing economies — the higher GDP growth rates in emerging markets coupled with the huge, untapped population base is every company’s dream come true.

From a larger, societal perspective, too, if products and services can be created to address the unmet needs of this segment, it will bring about a systemic change, leading to positive social and environmental development. Trouble is, after more than two decades of globalisation and economic liberalisation in India — and considerably longer in other emerging countries — most multinationals continue to serve only the upper socio-economic strata in these countries. That’s nowhere near enough.

So, what can be done? First, global companies, which are usually envisaged as the second actor in market building (the first, of course, being the government), need to leave behind their legacy West-oriented business models and adopt a different mindset with respect to value creation, operating, marketing and distribution decisions. Here, there is a need for differentiation by adopting a symbiotic relationship (win-win and long term) with civil society organisations.

Civil society in the form of non-government organisations (NGOs) — the third actor in market building — needs to manage the social and environmental issues that are being overlooked by the public and private sectors. After all, given their inherent focus on social issues, NGOs are the nearest connection to the people at the BoP.

Over the years, NGOs have played multiple roles in market building in emerging economies. Initially (and in many places, still), they acted as de facto market regulators, ensuring regulatory standards and compliance mechanisms are imposed on the corporate sector, with regard to social and environment parameters.

While some of the rules thus imposed may seem overly restrictive to many companies, they have largely emerged as a response to counter exploitative capitalism. One organisation that has done significant work in the area, is the Centre for Science and Environment (though it could be said the NGO has been extremely harsh at various points in time), which has motivated several organisations to move to zero or positive water balance; has impacted mining practices; improved food safety standards, etc.

A second role for NGOs has been as complementary partners for value offerings to those at the BoP. This would involve creating an arm’s-length relationship between the NGO and the corporate with well-defined roles and responsibilities for each. But it can work well. A powerful example of this would be SEWA that works as an intermediary and links life and general insurers such as Tata AIG and others, to provide composite products.

Companies are feeling the pinch of eroding margins and intense competition in mid- and high-income markets and, naturally, they’re seeking alternatives. By building a transaction-oriented partnership with local actors like NGOs and other local market players, they can reach out to millions of consumers who lack access to the formal market economy. Of course, keep in mind that companies are still driven by the need to generate economic returns, not create social or environmental benefits, which means the NGO is really only a delivery channel that provides access to the market at the BoP.

The third role, which is an emerging trend, involves NGOs and companies acting as value co-creators and partners having a common business model for a specific business or socio-economic cause at the base of the pyramid. This role has emerged as the modern face of capitalism, in which companies are trying to redefine capitalism as a means for creating a balance between social, economic and environmental outcomes.

In the past few years, Danone has entered into a joint venture with Grameen Bank to manufacture and deliver dairy products to poor children in Bangladesh. Microsoft has tied up with Pratham to deliver personal computers to villages in India. Since 1999, Citi has supported projects with over 22 NGOs across India, helping over 1.65 million poor families through enterprise development, youth education and microfinance. This convergence of capabilities and interests between NGOs and companies is leading to the creation of innovative, win-win business models.

This implies creating value offerings that add economic value for all stakeholders in a way that it also benefits the environment and the society. The focus, hence, is shifting from a transaction orientation to engagement-orientation, where the low-income segment is engaged across the value-chain as consumers, producers, suppliers, innovators, entrepreneurs and employees.

In this process, NGOs can act as a critical link or bridge partner between companies and the low-income segment for creating awareness, ensuring mutual accessibility, and local capacity- and skill-building. In the past two decades or so, the relationship between companies and NGOs has thus evolved from adversarial to becoming value co-creators. It’s a symbiotic relationship, with both needing each other to achieve their goals.

Companies operating at the lowest levels of society and economy need NGOs’ last-mile connectivity, local reach, network, knowledge and community-based marketing techniques to set up successful enterprises. In turn, NGOs need to learn business discipline, operational efficiency and embrace latest know-how and technology if they are to manage their operations more effectively, become self-sustaining and make a significant difference in the lives of the people they intend to serve.

The article was published with Outlook Business in the issue dated July 21, 2012.