The changing role of states in India 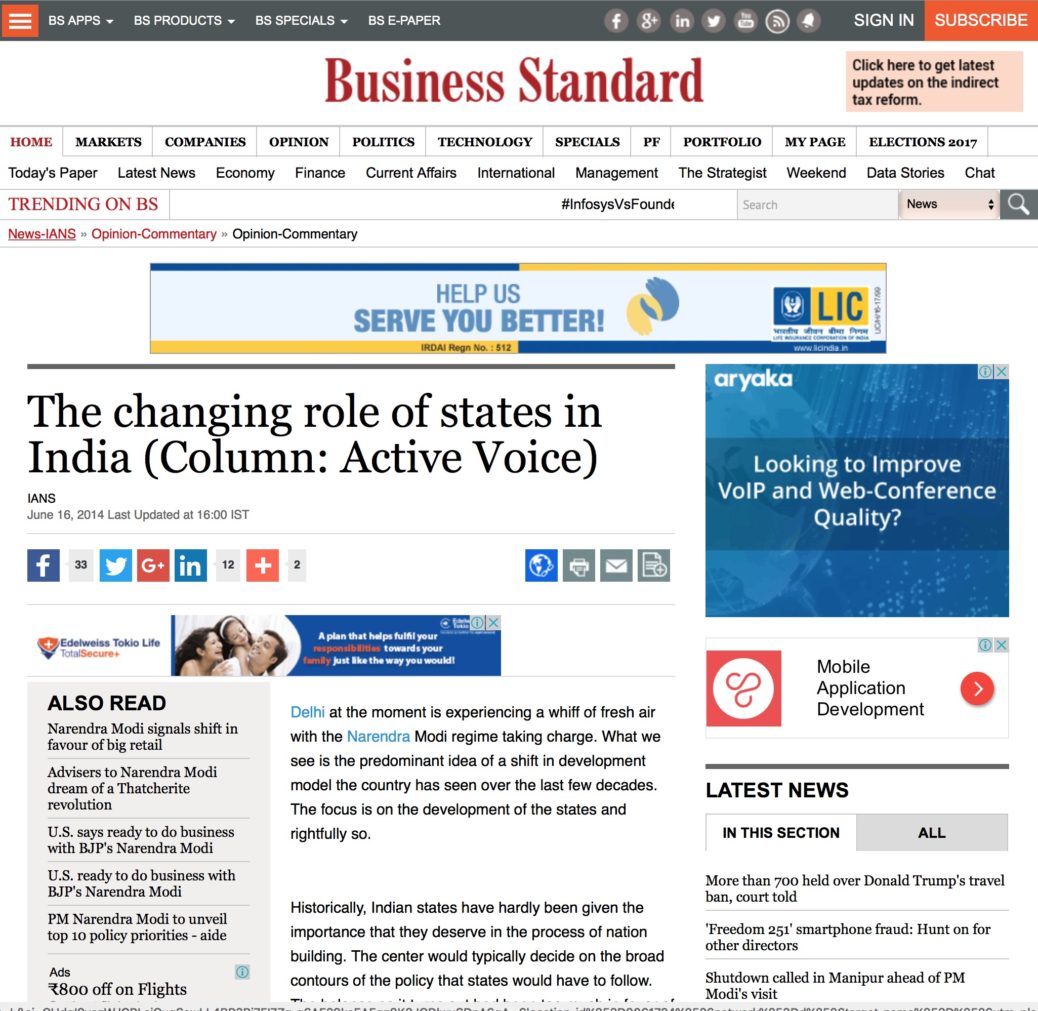 Delhi at the moment is under a whiff of fresh air with the Narendra Modi regime taking charge at the center. A leader who had learnt his lessons by managing the affairs of the state effectively and with aplomb brings in a whiff of fresh air. What we see is the predominant idea of a shift in development model the country has seen over the last few decades. Today the predominant idea is towards the development of the state and rightfully so.

Historically, Indian states had hardly been given the importance that they deserve in the process of nation building. The center would typically decide on the broad contours of the policy that states would have to follow.  The balance as it turns out had been too much in favor of the union in case of center-state relations.  The planning commission and finance commission are working towards devolving financial power to states with the definite recommendation and mandate to increase the share of revenue collections going to states.  However, financial devolution is only a part of the puzzle. The larger and a broader question would be how to make different states as partners in development. This would predominantly happen through empowering the states to develop their own vision, take action and build clear understanding that they are partners in India’s development. The change would start with the center appreciating unique challenges of each state and trying to address them through all possible interventions.

Another area of concern is the state’s relationship with its neighbors.  The relationship should be driven by the reality that is dominated by resource sharing and economic activity. Ideally if a state performs well it should encourage a spirit of healthy competition with other states for overall development of the region. However in India one often feels that the opposite is true with most states trying to undermine their counterpart’s development oriented work. This results in a race to the bottom with debates being relegated to severe criticism of development models of each state.

The idea should be to learn from each other, imbibe the positives and celebrate different models of development. This spirit of bonhomie would only arise when states have belief in their own models and trying to learn from development paradigm of others and adopt to catch in areas where you lag behind. As a case in point various states could learn from Gujarat through its achievements in agriculture productivity over the last decade that was driven by adopting practices like drip irrigation and check-dams Similarly Gujarat and Rajasthan have done great work in the area of renewable energy. The moment all of us acknowledge this as a positive development I would presume that no one in the country would have aversions to follow the path.

Just to drive home the point we should look at Kerala that has done well on human development indices and education. The idea to explore from here would be that how do we scale up and build this as an agenda across states.

When we compare our states with regions elsewhere like California in USA, we find our states are far less economically developed. While there are several historical, political and economic reasons for this the best answer that one could come up would be the lack of efficient institutions leading to low productivity and ensuring competitiveness. Indian states could also learn from successful models elsewhere like North Rhine Westphalia in Germany, California in USA, Guangdong in China and Sao Paulo in Brazil. These have their own problems but are economically superior to our states in GDP terms. What have they done right that we have missed? Of course, there are things like economic geography you can’t change but there are things that we can change like human and industrial development.

In no way am, I suggesting one fits all approach to the development conundrum of states and in turn India. What is required is approaches that are lead by local realities.

We should not forget that India’s tomorrow is dependent on what happens in its states rather than what happens in Delhi. This for sure is a critical first step in understanding our unity in diversity and off course ensures that performance at the level of states would be the key towards India’s growth in the future.

Published with Business Standard on June 16, 2014.