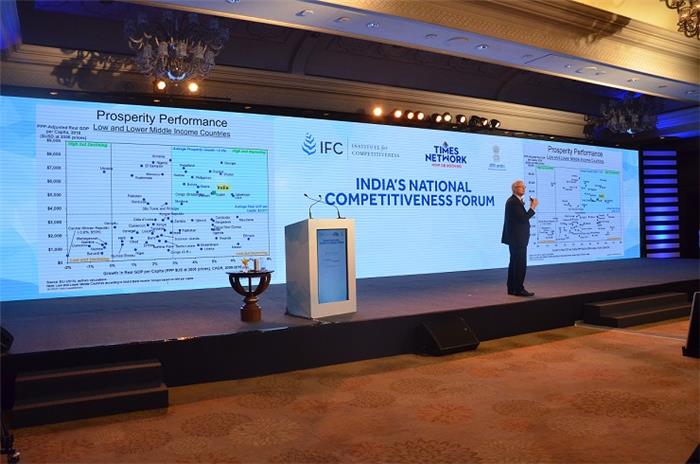 Harvard Business School Professor and leading management thinker, Michael E. Porter addressed a gathering of government and industry leaders on his idea for India’s competitiveness. He was speaking at the National Competitiveness Forum held in Taj Palace, New Delhi by Institute for Competitiveness.

Michael E. Porter delivered a keynote on “The Idea of Competitiveness”. He began by citing the changes he noticed in the Indian economy since his last visit 14 years ago and the potential that the saw in the country to scale if it improves upon its competitiveness.

In India, however, productivity remains low which on an aggregate level is explained by limits in terms of skill, capital stock, and technology. Also, assimilating productive workers into the workforce has been a major challenge for the country. Therefore, low productivity and low employment generation have hurt India’s competitiveness.

Porter, then, outlined the fundamental determinants of competitiveness in an economy. Competitiveness, first, depends on its endowments, which includes natural resources, geographical location, and land area. However, there are countries with good endowments and serious social and economic problems. True prosperity arises from productivity in the use of endowments.

Productivity ultimately depends on the microeconomic capability of the economy, which includes the quality of the business environment, state of cluster development and sophistication of company operations and strategy.

Further, in the past, the country has had a bad business-government relationship. That needs to change. As mentioned, to enhance prosperity, there is a need to create an environment where both businesses and citizens do well. “India cannot be successful unless businesses in India are successful”, he added. Businesses are the only organisations that can create wealth.

India has made significant progress on improvement of this relationship under the current government and has also taken bold policy initiatives in the last few years to address some structural changes. However, there are a few issues it needs to urgently address: reduce the cost of formality, bureaucratic complexity, access to capital, public education and infrastructural deficits. To improve upon these aspects, India needs to have three things: a shared understanding of competitiveness, a coherent strategy and excellence in implementation.

He also stressed on the need to facilitate the development of clusters across industries to improve India’s microeconomic competitiveness. He exemplified his arguments with the case of pharmaceutical cluster in the state of Andhra Pradesh. There is high evidence of correlation between clusters and economic outcomes. Clusters lead to higher job growth, higher wages, higher patenting rates, greater new business formation and resilience in downturns.

He concluded by saying that competitiveness improvement will require sustained efforts across decades and government administrations. Also, the private sector needs to be a true partner in upgrading competitiveness. India has a lot of diversity, but it needs unity on a common vision for the country’s future.

The session ended with a fireside chat with Naveen Jindal based on his views on competitiveness.