Press Release: The State of Inequality in India Report 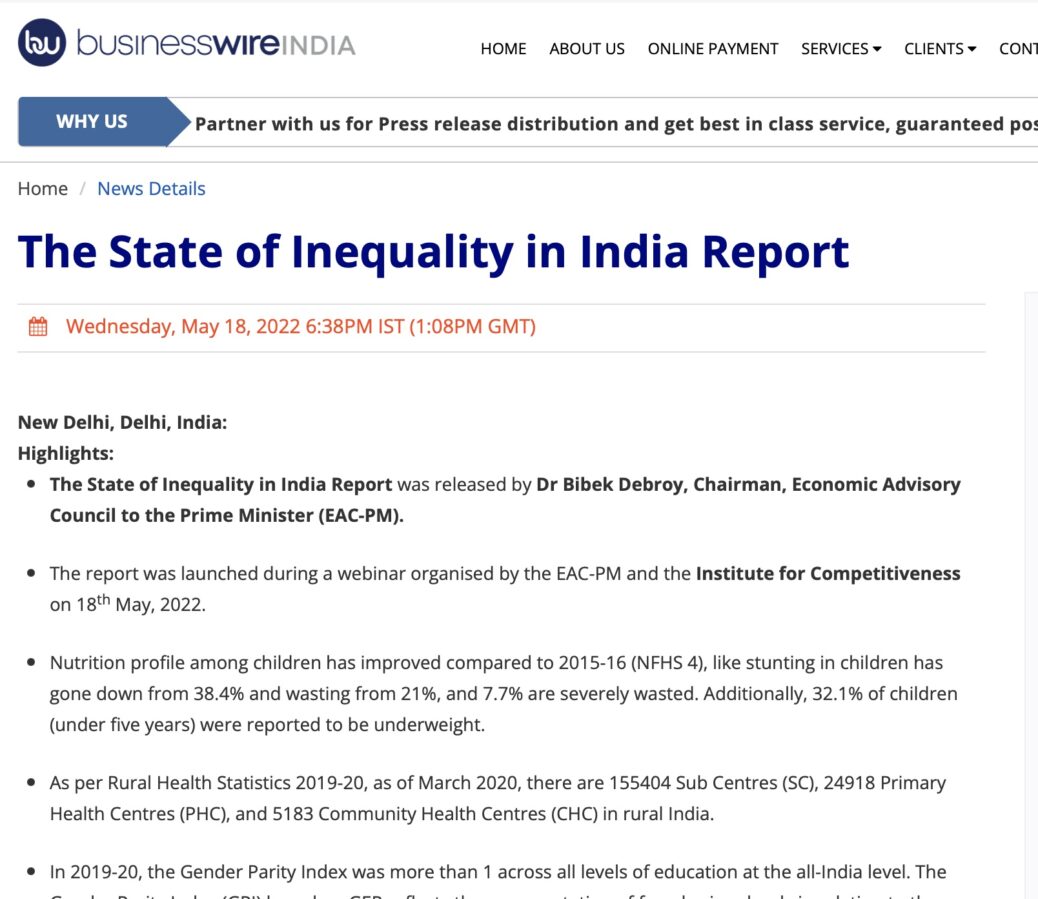 The State of Inequality in India Report

The report compiles information on inequities across sectors of health, education, household characteristics and the labour market. As the report presents, inequities in these sectors make the population more vulnerable and trigger a descent into multidimensional poverty.

Inequality is not simply a lack of resources but a more profound experience of dearth relative to others. It is living in vulnerability and deprivation with restricted means of upward mobility. Consisting of two parts – Economic Facets and Socio-Economic Manifestations – the report looks at five key areas that influence the nature and experience of inequality. These are income distribution and labour market dynamics, health, education and household characteristics. Based on the data derived from various rounds of the Periodic Labour Force Survey (PLFS), National Family and Health Survey (NFHS) and UDISE+, each chapter is dedicated to explaining the current state of affairs, areas of concern, successes and failures in terms of infrastructural capacity and finally, the effect on inequality. The report stretches the narrative on inequality by presenting a comprehensive analysis that shapes the ecosystem of various forms of deprivation in the country, which directly impacts the well-being of the population and overall growth. It is a study that cuts across the intersections of class, gender, and region and highlights how inequality affects society.

The report presents the case for moving beyond wealth concentration as a metric of inequality. Instead, emphasis should be given to dynamic variables like income distribution that determine capital flow and measure the purchasing power of the households. In this respect, the income data for 2017-18, 2018-19 and 2019-20 has been taken from PLFS to highlight the level of income disparity in the country. Notably, a monthly salary of Rs 25,000 is already amongst the top 10% of total incomes earned. The top 1% accounts for 6-7% of total incomes earned, and the top 10% holds almost one-third share of all incomes earned. In terms of the labour market, the labour force participation rate (LFPR) has registered a slight growth from 49.8% in 2017-18 to 53.5% in 2019-20. The gender disparity in the labour market continues to be stark over the three years in 2019-20, the female LFPR was at 30%, in contrast the male LFPR is recorded at 76.8%.

In the health sector, there has been an increase in the number of Sub-Centres, Primary Health Centres, and Community Health Centres, from 1,72,608 health centres in 2005 to 1,85,505 in 2020. As per NFHS-5 (2019-21), 70% of women have received antenatal check-ups in the first trimester. 78% of women received postnatal care from a doctor or auxiliary nurse within two days of delivery, and 79.1% of children received postnatal care within two days of delivery. Issues of concern remain nutritional deprivation – overweight, underweight, stunted and wasted growth.

The condition of education infrastructure has improved, with 95% of schools having functional toilet facilities on the school premises (95.9% functional boy’s toilets and 96.9% functional girl’s toilets), and 80.16% of schools having functional electricity connections. Additionally, 97.5% of schools have established access to safe drinking water. Investment in these kinds of infrastructural development ensures that a safe and sound learning environment is provided to the learners. It is emphasised that education and cognitive development from the foundational years is a long-term corrective measure for inequality. Regarding improvement in household conditions, emphasis on providing access to sanitation and safe drinking water has meant leading a dignified life for most households. According to NFHS-5 (2019-21), 97% of households have electricity access, 70% have improved access to sanitation, and 96% have access to safe drinking water.

In his keynote address, Dr Bibek Debroy remarked “I think the great utility of this report is on different kind of inequality which is not the personal distribution but it is the spatial distribution. We know there are differences between states, we know that the government ie union as well as state government have been trying to ensure basic necessities and this is what the report documents.”

The panellists for the launch included, Dr Charan Singh, Chief Executive at Foundation for Economic Growth and Welfare (EGROW), Dr Poonam Gupta, Director General, NCAER and a member of the Economic Advisory Council to the Prime Minister and Dr Suresh Babu, Professor, Department of Humanities and Social Sciences, IIT Madras. The panellists made several poignant remarks on the issue as they discussed the report.

Dr. Poonam Gupta stated that there can be other matrics for measuring inequality such as gender, skills and age group. However, in the income vs growth debate, as a policymaker, we need to focus on income which should be the immediate goal.

Dr. Suresh Babu mentioned that for policy measures to tackle inequality there are four important aspects, the first is employment opportunities, the second should be facilitating empowerment, the third focuses on enhancing security and the fourth there is a need to link poverty and inequality and social cohesion.

The report has been authored by Amit Kapoor, Chair, Institute for Competitiveness and Jessica Duggal, Reseracher, Institute for Competitiveness. Based on the report’s findings, recommendations like creating income slabs that provide class information, establishing universal basic income, creating jobs, especially among the higher levels of education and increasing the budget for social protection schemes have been made. The report emphasises on the interaction between social and economic aspects of inequality, which helps us holistically drive policy action through social protection frameworks.