An Enabling Ecosystem towards formalization for enterprises 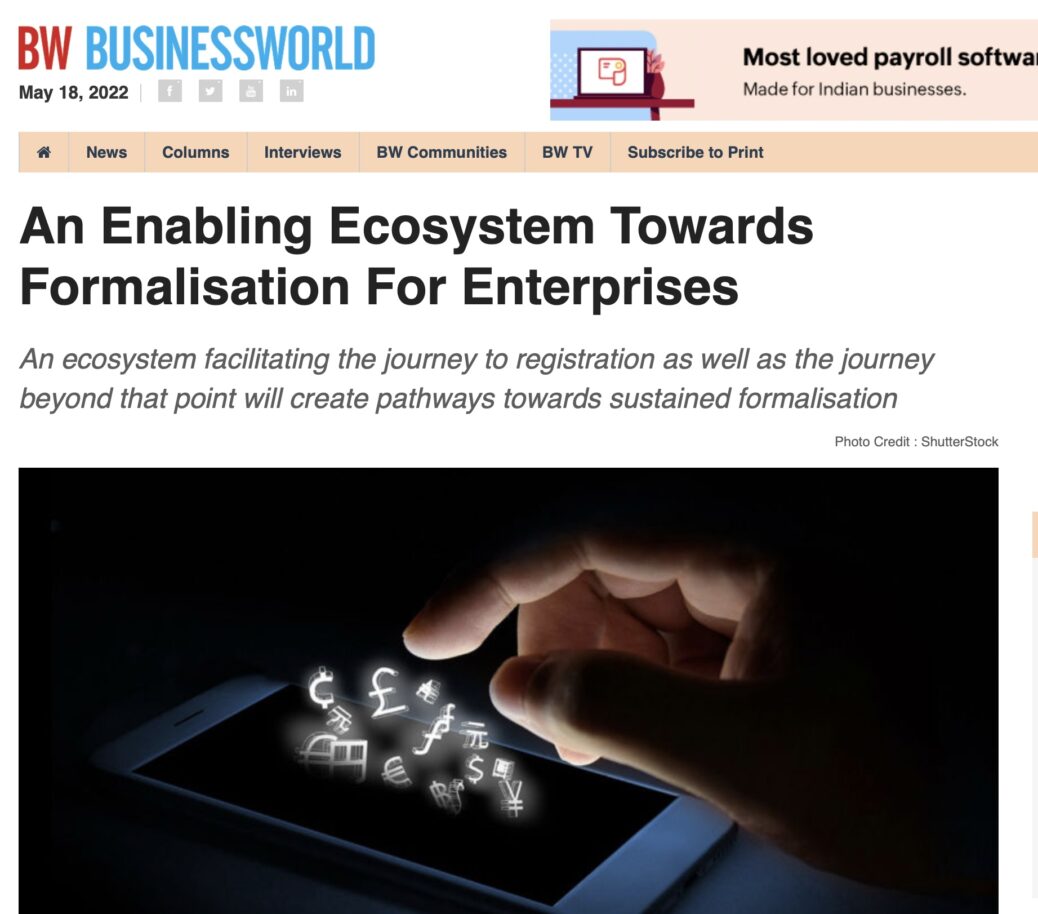 An Enabling Ecosystem towards formalization for enterprises

The subject of transitioning from informality to formality continues to be discussed extensively. Informal economy comprises of activities that are beyond the state’s reach. Emerging and developing countries have 93 per cent of the world’s informal employment.Around the world, informality makes up for makes up about a third of low- and middle-income countries’ economic activity. India is no exception to this. The oft-cited statistic to show the grip of informality in Indian economy shows that 99.7 percent of all enterprises in India operate informally, and 93% of its total workforce earn their livelihoods as informal workers.The benefits of formalization in an economy are myriad – access to capital, suppliers, talent, skills, and technology. Greater formalization in enterprises levels the playing field for enterprises ensuring fairer competition, contributes to government revenue and enables higher economic growth. While there are strong arguments in favour of the transition from informal to formal, it is high time we understand that this process is not a linear one. Formalization is not an end point that is to be reached. It has to be approached as a process that enables enterprises to formally register and thrive beyond that.

Over the years, the government has taken multiple initiatives to increase the spread of formality in India. The Udyam Portal is one such recent initiative that facilitates formal registration of MSMEs, majority of which operate informally, through a digital, paperless process based on self-declaration. The Economic Survey 2021-22 stated that as of Jan 17, 2022, 66 lakh enterprises have registered on the Udyam portal. It is now critical to assess the trajectory of the enterprises and address challenges they face as newly formalized units. This exercise is particularly important for the micro firms which form around 94.6 percent of the total number of these registered enterprises. For enterprises, the choice between formal and informal is usually perceived through a cost-benefit lens. The costs of becoming and remaining formal include registration costs, tax and compliance costs, fees and social contributions. On the other end, benefits associated with being formal include reduction in closure risk, better access to business development services, financial and insurance services and access to a wide variety of markets. In addition to offering greater benefits exceeding costs, the other recommended approaches towards greater formalization suggest simplification of laws, enforcement and easing compliance. However, one approach that calls for greater emphasis is enhancing competitiveness of enterprises. Increasing productivity makes enterprises confident to transition to formality as it boosts their ability to compete with larger, formal competitors. For productivity enhancement, a range of mutually reinforcing policy initiatives such as investment in health, education, skills and infrastructure are needed.

There are pathways into and out of formality. Our focus has to be on strengthening pathways leading to formality and enhancing capabilities of firms to stay in the formal arena. The 27 percent increase in the number of unincorporated non-agricultural enterprises (excluding construction) between 2010-11 to 2015-16 in India makes this all the more crucial. It is not just the high share of informality but also the stubborn persistence of it over decades that calls for a re-evaluation in our approach to formalization. Apart from focusing on creation, preservation and sustainability of enterprises in the formal economy, the International Labour Organisation puts emphasis on preventing informalization of formal economy jobs. We must take efforts to ensure that enterprises do not fall back into informality or are forced to shut shop. Formality is not a given forever. An ecosystem facilitating the journey to registration as well as the journey beyond that point will create pathways towards sustained formalization.

The article was published with Business World on May 18, 2022.