The State of Inequality in India Report released 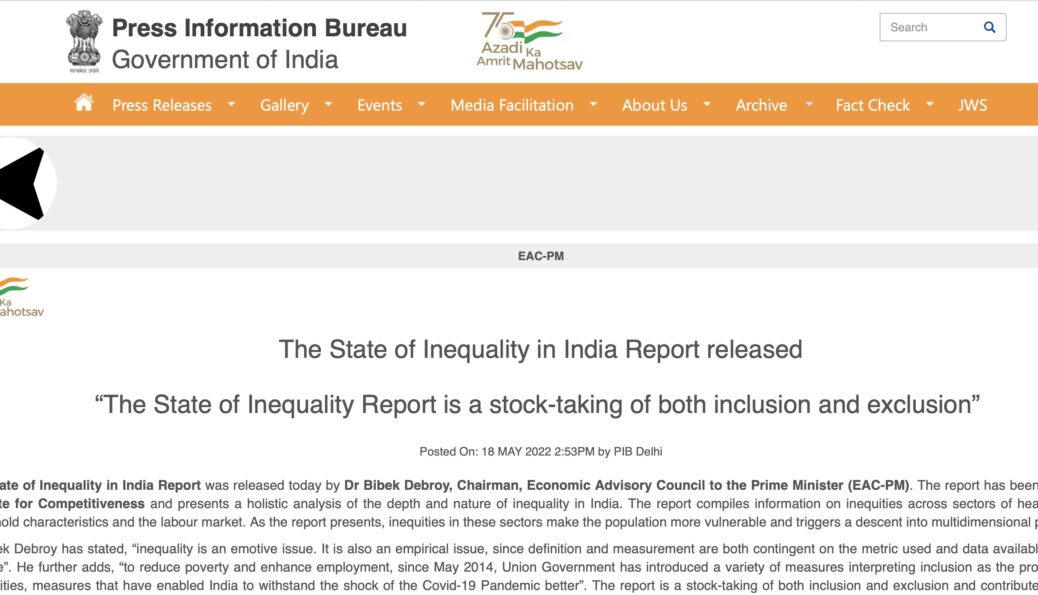 The State of Inequality in India Report was released today by Dr Bibek Debroy, Chairman, Economic Advisory Council to the Prime Minister (EAC-PM). The report has been written by the Institute for Competitiveness and presents a holistic analysis of the depth and nature of inequality in India. The report compiles information on inequities across sectors of health, education, household characteristics and the labour market. As the report presents, inequities in these sectors make the population more vulnerable and triggers a descent into multidimensional poverty.

Dr Bibek Debroy has stated, “inequality is an emotive issue. It is also an empirical issue, since definition and measurement are both contingent on the metric used and data available, including its timeline”. He further adds, “to reduce poverty and enhance employment, since May 2014, Union Government has introduced a variety of measures interpreting inclusion as the provision of basic necessities, measures that have enabled India to withstand the shock of the Covid-19 Pandemic better”. The report is a stock-taking of both inclusion and exclusion and contributes to the policy debates.

The panellists for the launch included Dr Poonam Gupta, Director General, NCAER and a member of the Economic Advisory Council to the Prime Minister and Dr Charan Singh, Chief Executive at Foundation for Economic Growth and Welfare (EGROW) and Professor Suresh Babu of IIT Madras. The panellists made several poignant remarks on the issue as they discussed the report.

Consisting of two parts – Economic Facets and Socio-Economic Manifestations – the report looks at five key areas that influence the nature and experience of inequality. These are income distribution and labour market dynamics, health, education and household characteristics. Based on the data derived from various rounds of the Periodic Labour Force Survey (PLFS), National Family and Health Survey (NFHS) and UDISE+, each chapter is dedicated to explaining the current state of affairs, areas of concern, successes and failures in terms of infrastructural capacity and finally, the effect on inequality. The report stretches the narrative on inequality by presenting a comprehensive analysis that shapes the ecosystem of various deprivation in the country, which directly impacts the well-being of the population and overall growth. It is a study that cuts across the intersections of class, gender, and region and highlights how inequality affects the society.

The report moves beyond the wealth estimates that depict only a partial picture to highlight estimates of income distribution over the periods of 2017-18, 2018-19 and 2019-20. With a first-time focus on income distribution to understand the capital flow, the report emphasises that wealth concentration as a measure of inequality does not reveal the changes in the purchasing capacity of households. Extrapolation of the income data from PLFS 2019-20 has shown that a monthly salary of Rs 25,000 is already amongst the top 10% of total incomes earned, pointing towards some levels of income disparity. The share of the top 1% accounts for 6-7% of the total incomes earned, while the top 10% accounts for one-third of all incomes earned. In 2019-20, among different employment categories, the highest percentage was of self-employed workers (45.78%), followed by regular salaried workers (33.5%) and casual workers (20.71%). The share of self-employed workers also happens to be the highest in the lowest income categories. The country’s unemployment rate is 4.8% (2019-20), and the worker population ratio is 46.8%.

In the area of health infrastructure, there has been a considerable improvement in increasing the infrastructural capacity with a targeted focus on rural areas. From 1,72,608 total health centres in India in 2005, total health centres in 2020 stand at 1,85,505. States and Union Territories like Rajasthan, Gujrat, Maharashtra, Madhya Pradesh, Tamil Nadu and Chandigarh have significantly increased health centres (comprising of Sub-Centres, Primary Health Centres, and Community Health Centres) between 2005 and 2020. The results of NFHS-4 (2015-16) and NFHS-5 (2019-21) have shown that 58.6% of women received antenatal check-ups in the first trimester in 2015-16, which increased to 70% by 2019-21. 78% of women received postnatal care from a doctor or auxiliary nurse within two days of delivery, and 79.1% of children received postnatal care within two days of delivery.However, nutritional deprivation in terms of overweight, underweight, and prevalence of anaemia (especially in children, adolescent girls and pregnant women) remains areas of huge concern requiring urgent attention, as the report states. Additionally, low health coverage, leading to high out-of-pocket expenditure, directly affects poverty incidences.

According to the report, education and household conditions have improved enormously due to targeted efforts through several social protection schemes, especially in the area of water availability and sanitation that have increased the standard of living. It is emphasised that education and cognitive development from the foundational years is a long-term corrective measure for inequality. By 2019-20, 95% of schools have functional toilet facilities on the school premises (95.9% functional boy’s toilets and 96.9% functional girl’s toilets). 80.16% of schools have functional electricity connections with States and Union Territories like Goa, Tamil Nadu, Chandigarh, Delhi, Dadra and Nagar Haveli and Daman and Diu, Lakshadweep and Puducherry have achieved universal (100%) coverage of functional electricity connections. The Gross Enrolment Ratio has also increased between 2018-19 and 2019-20 at the primary, upper primary, secondary and higher secondary. In terms of improvement in household conditions, emphasis on providing access to sanitation and safe drinking water has meant leading a dignified life for most households. According to NFHS-5 (2019-21), 97% of households have electricity access, 70% have improved access to sanitation, and 96% have access to safe drinking water.

The information available on inequality, which this report brings out, will help formulate reform strategies, a roadmap for social progress and shared prosperity. Recommendations like creating income slabs that provide class information, establishing universal basic income, creating jobs, especially among the higher levels of education and increasing the budget for social protection schemes have been made.