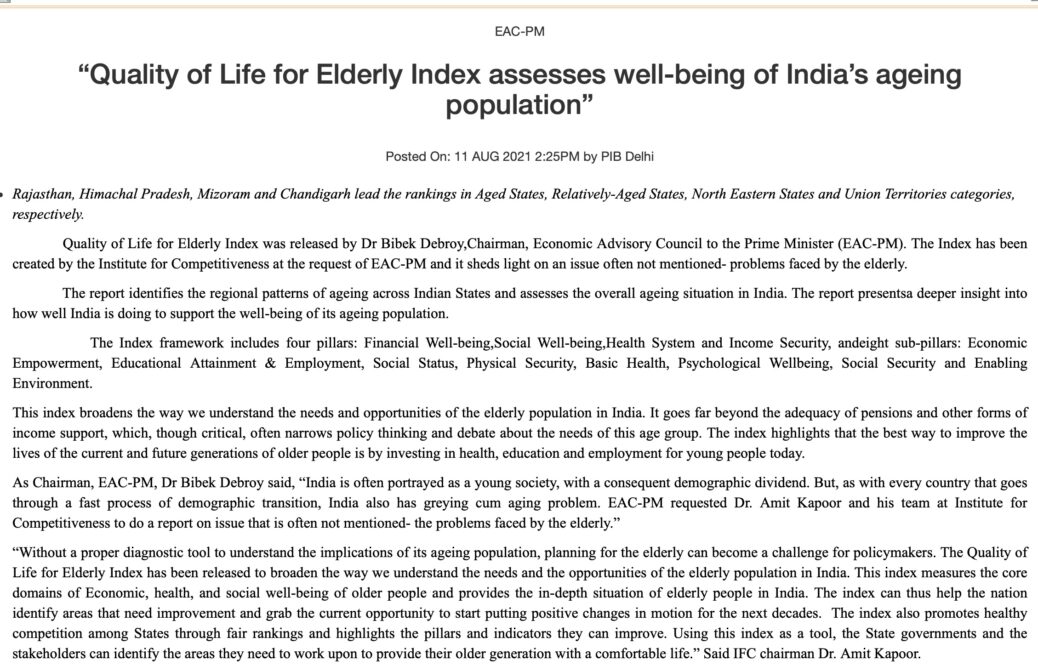 Quality of Life for Elderly Index was released by Dr Bibek Debroy,Chairman, Economic Advisory Council to the Prime Minister (EAC-PM). The Index has been created by the Institute for Competitiveness at the request of EAC-PM and it sheds light on an issue often not mentioned- problems faced by the elderly.

The report identifies the regional patterns of ageing across Indian States and assesses the overall ageing situation in India. The report presentsa deeper insight into how well India is doing to support the well-being of its ageing population.

This index broadens the way we understand the needs and opportunities of the elderly population in India. It goes far beyond the adequacy of pensions and other forms of income support, which, though critical, often narrows policy thinking and debate about the needs of this age group. The index highlights that the best way to improve the lives of the current and future generations of older people is by investing in health, education and employment for young people today.

“Without a proper diagnostic tool to understand the implications of its ageing population, planning for the elderly can become a challenge for policymakers. The Quality of Life for Elderly Index has been released to broaden the way we understand the needs and the opportunities of the elderly population in India. This index measures the core domains of Economic, health, and social well-being of older people and provides the in-depth situation of elderly people in India. The index can thus help the nation identify areas that need improvement and grab the current opportunity to start putting positive changes in motion for the next decades.  The index also promotes healthy competition among States through fair rankings and highlights the pillars and indicators they can improve. Using this index as a tool, the State governments and the stakeholders can identify the areas they need to work upon to provide their older generation with a comfortable life.” Said IFC chairman Dr. Amit Kapoor.

Key Highlights from the Report:

Category-wise Rankings of Quality of Life for Elderly Scores: