Index on Quality of Life for Elderly: State-Wise Analysis of the Well-Being of Our Elderly Population 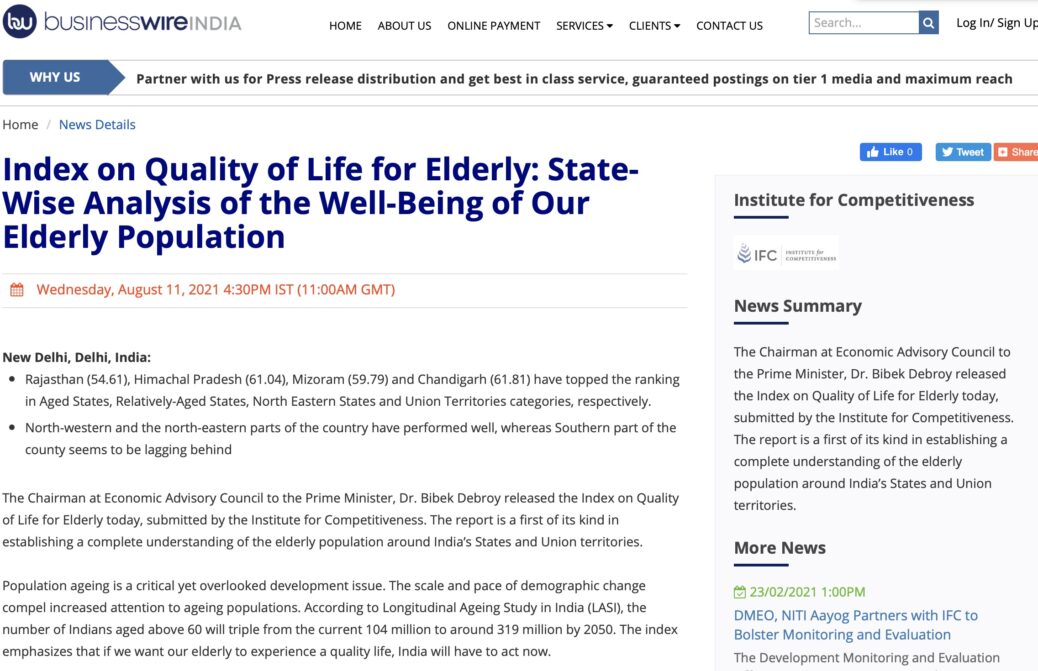 Index on Quality of Life for Elderly: State-Wise Analysis of the Well-Being of Our Elderly Population

The Chairman at Economic Advisory Council to the Prime Minister, Dr. Bibek Debroy released the Index on Quality of Life for Elderly today, submitted by the Institute for Competitiveness. The report is a first of its kind in establishing a complete understanding of the elderly population around India’s States and Union territories.

Population ageing is a critical yet overlooked development issue. The scale and pace of demographic change compel increased attention to ageing populations. According to Longitudinal Ageing Study in India (LASI), the number of Indians aged above 60 will triple from the current 104 million to around 319 million by 2050. The index emphasizes that if we want our elderly to experience a quality life, India will have to act now.

To ensure fair ranking, states and union territories are divided into four categories: Aged States (having above 5 million elderly population), Relatively Aged States (having below 5 million elderly population), Northeastern States and Union Territories. Rajasthan (54.61), Himachal Pradesh (61.04), Mizoram (59.79) and Chandigarh (61.81) have topped the ranking in each of these categories, respectively.

What scores have to say about the state performances

As per the index scores, North-western and North-eastern parts of the country have performed well, whereas the Southern part of the county seems to be lagging behind.  Mizoram (59.79), Uttarakhand (59.47) and Chandigarh (61.81) are some of the better performing states and UT. States like Andhra Pradesh (44.37), Karnataka (46.92), and some eastern/north-eastern states have scored low.

Barring Arunachal Pradesh, all poorest performing states are the Aged States, thus making it the lowest scoring category. Rajasthan (54.61), Maharashtra (53.31) and Bihar (51.82) are the top three scorers among the Aged states.

Most of the Northeastern States have performed well, with the exception of Tripura (49.18) and Arunachal Pradesh (39.28), that have scored below 50. States in this category have performed well in the Health System and Social Well-being but lag behind in the Income Security pillar. Union Territories have also shown commendable performance in almost all pillars.

Except for Jammu and Kashmir (46.16), all other UTs have scores above 53, with Chandigarh (61.81) being at the top followed by Dadra and Nagar Haveli (58.58). However, the Financial Well-being score (38.22) of Dadar and Nagar Haveli is the lowest in this category.

Health System has shown the best performance among all the pillars, with 63.8% of the states and union territories scoring more than the national average (66.97) in the pillar. Social Well-being pillar follows second, with a national average score of 62.23.

The remaining pillars, Financial Well-Being and Income Security have scored the lowest, securing a national average of 44.98 and 33.03, respectively. The lowest national average for the Income Security pillar indicates the lack of income among the older population, which can lead to other forms of deprivation and experience of discrimination, humiliation, and rejection among our elderly.

The findings of the report warrant that the governments as well as other stakeholders take adequate measures to ensure income security among the elderly. Initiatives for skill-building or reskilling of our elderly population are also imperative for enabling them to participate in economic activities.

This index attempts to broaden the way we understand the needs and opportunities of the elderly population in India. Income support remains an essential concern, but there are other areas too that India needs to work upon to improve our older generations’ life.

Based on the aforementioned findings, the report suggests the following key interventions: –

Chief India Economist at JP Morgan, Dr. Sajjid Chinoy commended the Index, “As someone famously said, what you cannot measure you cannot improve. It is a simple index, which is a great starting point in thinking about the macroeconomic implications of this demographic transition.”

“The definition of elderly is shifting, because recent research shows that the most productive years in one’s lifetime are within 60 to 70 years, followed by 70 to 80 years, and 50 to 60 years, respectively. So, we must understand what we consider elderly today might be your most valuable resource,” Dr. Didar Singh remarked on the policy suggestions regarding increase in retirement age and reskilling of the elderly.

The esteemed panelists also discussed the fiscal challenges of ageing and concurred that higher taxation is key to ensure income security of the elderly in the future as informal systems of financial support come under greater pressure.

“More often, ageing population is perceived as a detriment to economic growth, which is not true. Older adults are more experienced, wiser and know how to solve problems. The challenge is not the advancing age of our younger generation today; instead, the real challenge is to find a positive narrative that undercuts the negativity and transform our ageing people into an asset,” stated Dr. Amit Kapoor, Honorary Chairman, Institute for Competitiveness.

Category-Wise Rankings of Quality of Life for Elderly scores: