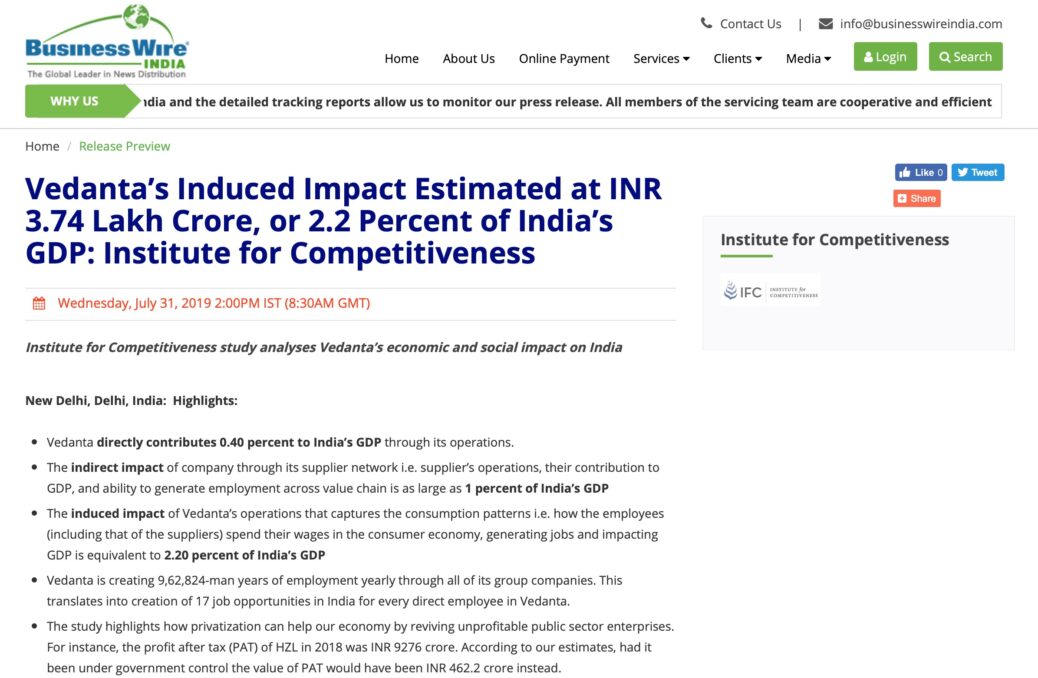 Businesses have a substantial impact on people’s lives, whether as employees, suppliers, investors or consumers. They play a critical role in shaping people’s wellbeing, generating employment opportunities and enhancing the economic prosperity of regions. This happens through the choice of products and services that they offer to the society, their investment decisions, the contribution to public finances, the opportunities they offer for skilling and training, their internal governance, or through their impact on the physical space and the resources available to society and future generations.

In a major shift from the past, the role of the private sector in the economy is being increasingly recognised by the Indian government as well. The Finance Minister, Nirmala Sitharaman in her recent budget speech highlighted that the private sectors are the wealth creators. She said, “Gone are the days of policy paralysis and license-quota-control regimes. India Inc. are India’s job-creators. They are the nation’s wealth-creators. Together, with mutual trust, we can gain, catalyse fast and attain sustained national growth”. The private sector not only helps in achieving the economic objectives but also impact the social progress of the country. They solve societal challenges either by rebuilding business models around social issues or through increasing their social investments aimed at enhancing ease of living.

It assesses the company’s impact beyond the immediate effect created through revenue growth using India’s input-output tables. The study undertakes a wider assessment of the company’s impact at two levels: the output growth of its suppliers and the consumption effect generated by its employees. The direct impactof company’s operations i.e. through its revenue is as large as 0.40 percent of India’s GDP. The indirect impact, which captures how the company is enhancing the output of its suppliers, is INR 1,69,550 crores, that is as large as 1 percent of India’s GDP.      `

The company also impacts the economy through the remuneration of its employees, a part of which is spent on consumption of goods and services, which further creates jobs and increases the country’s GDP. This impact, known as the induced impact, is as large as 2.20 percent of India’s GDP. Out of the six companies for which the input-output study was carried out in the study, Hindustan Zinc’s induced impact is the highest at 0.76 percent, followed by Vedanta Aluminium (0.64), Cairn India (0.29), Balco (0.26), TSPL (0.14) and Sesa (0.09).

Apart from Vedanta’s impact on the Indian economy through output creation, the report also analyses the impact of the company through the lens of employment generation. It has been estimated that Vedanta Aluminium has the highest job creation capacity i.e. 21 jobs per employee, followed by HZL (18), Cairn (13), Balco (12) and TSPL (6).

A consistency in driving productivity of workers is what helps companies to maintain a competitive edge. Therefore, the report also examines the labour productivity to get an idea of the future prospects of the company. The results show that the productivity of the company has significantly increased in the last few years. For instance, an average HZL employee is over 100 percent more productive today than it was five years ago.

Another level of impact by the company is through the improvement in import substitution capacity of the economy through its operations. They also cater to the domestic demand for the metals such as zinc, aluminium, copper, silver, iron, lead and oil that helps the country to save foreign exchange. Through these operations, Vedanta benefits the country by reducing its import bill. It also helps the country earn foreign exchange by exporting these mined metals.

The report brings out that some companies of Vedanta group serve as a perfect example for portraying India’s privatisation story. For instance, government decided to privatise Hindustan Zinc in 2001 as its operations were becoming unviable. After acquisition by Vedanta the company witnessed a stark upswing in its revenue and profits. The profit of the company for the year 2018 was is INR 9276 crore. As per projections, it would have been INR 462.2 crore had it still been under government control.

The study investigates the social impact of Vedanta by looking at its CSR projects. It is found that the company is trying to improve social landscape of the country across different aspects such as malnutrition, education, water and sanitation etc. through their initiatives.

The report is an attempt to develop a body of work aimed at analysing how enterprises are creating a positive social impact and generating economic value. This is driven by the understanding that as businesses grow, they focus more on creating an inclusive economy by addressing societal challenges.

For more information on the Economic and Social Impact of Vedanta, please visit https://competitiveness.in/impact-analysis/