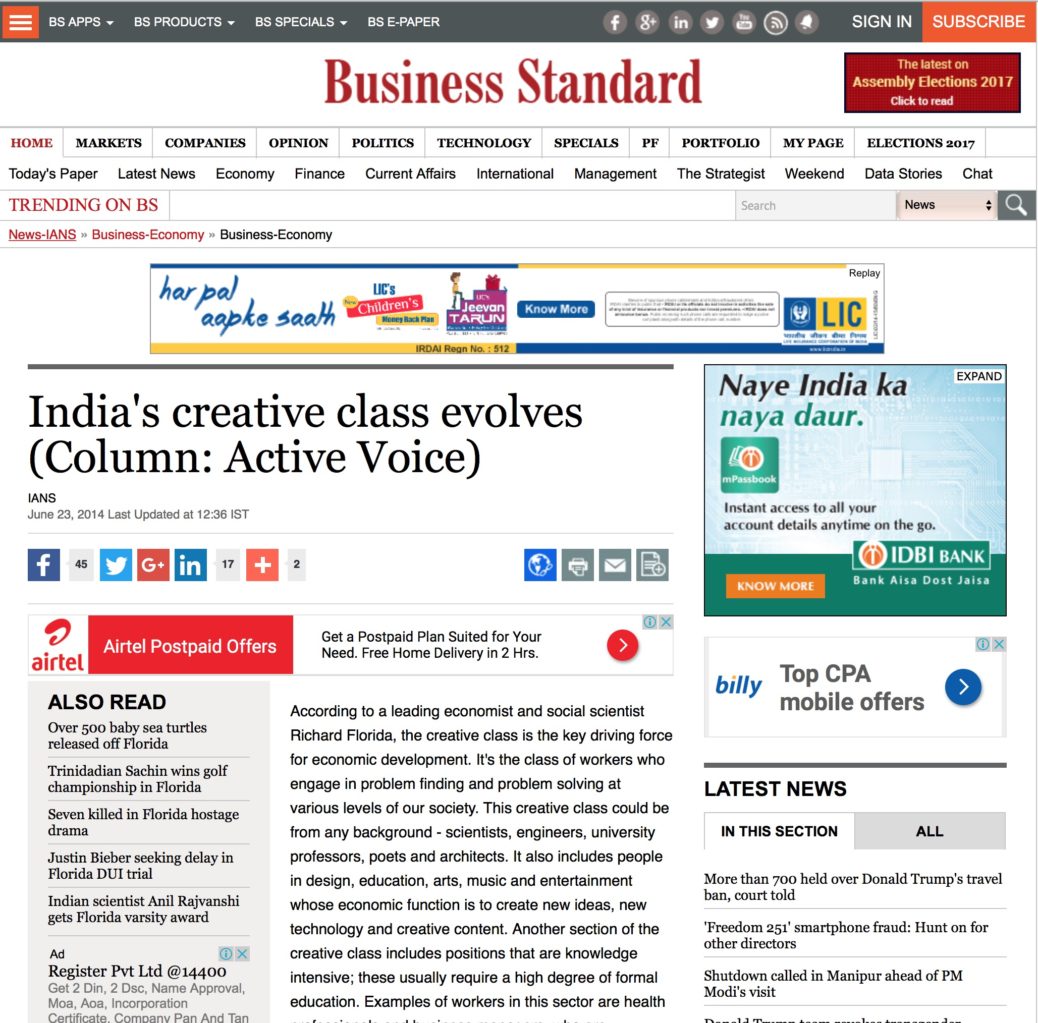 According to a leading economist and social scientist Richard Florida, creative class is the key driving force for economic development. It’s the class of workers who engage in problem finding and problem solving at various levels of our society. This creative class could be from any background like professionals namely scientists and engineers, university professors, poets and architects. It also includes people in design, education, arts, music and entertainment, whose economic function is to create new ideas, new technology and creative content. Another section of the creative class includes positions that are knowledge intensive; these usually require a high degree of formal education. Examples of workers in this sector are health professionals and business managers, who are considered part of the sub-group called creative professionals

The Creative Class is also known for its departure from traditional workplace attire, behavior and independence is highly regarded among the Creative Class and expected in the workplace. According to Florida, for a city to attract the Creative Class, he argues, it must possess “the three ‘T’s”: Talent (a highly talented/educated/skilled population), Tolerance (a diverse community, which has a ‘live and let live’ ethos), and Technology (the technological infrastructure necessary to fuel an entrepreneurial culture).

In the urban parts of India, today we are seeing the rise of a similar phenomenon and agglomeration of the creative class. One can notice the informality of the culture seeping in even rigid corporates. Offering work opportunities based on individual’s needs and requirements has become a priority for companies and we can see the civic authorities trying to indulge into the creation of ecosystems that offer a free culture. Creation of parks as well as community centers and one such standout example is in the form of Raahgiri, in Gurgaon. However, this is not to be confused as a movement of countercultures, but instead, it is to be seen in the light that counter narratives help the city seem colorful and in process help inclusion.

Research involving the preferences and values of this new socioeconomic class has shown that where people choose to live can no longer be predicted according to conventional industrial theories (such as “people will go to where the jobs/factories are”). Sociologists and urban theorists have noted a gradual and broad shift of values over the past decade. Creative workers are looking for cultural, social, and technological climates in which they feel they can best “be themselves”.

India in 2014 is seeing this change come about in its culture. We see more places for social interaction getting built around places where economic boom is seen, such as Gurgaon, Delhi, Mumbai and Bangalore. No wonder these places also are the ones that are attracting exceptional talent and enabling a like-minded culture. Relatively apart from the cities mentioned above Thiruvananthapuram, Pune, Kochi and Ludhiana also fare well when measured or deciphered on parameters like Tolerance, Talent and Technology.

When the creativity is measured internationally, India fares 50 out of 82 measured nations in the composite creativity index. When further probed, India ranked at 72nd position in the case of talent and 42nd in technology. For tolerance, India fared better compared to the other two measures with a 30th place but effectively, still 29 behind others. No wonder, talented people are lured to better opportunities abroad. According to the Index, of the total employed workforce in India, only 14% of it can be categorized in the Creative Class. In stark contrast to some of the developed nations such as UK, USA, Sweden all of whom have a creative class that constitutes more than 35% of all their jobs. Even amongst its BRIC peers India fares worse than Brazil that has a 22% creative class. To give India some credit, we fared far worse when the data was collected last time around in 2005, where India managed to be ranked at 41 out of the sample size of 45 countries.

Looking at the trend, India has managed to fare better in terms of making their urban centers more relevant and therefore should further focus on creating hospitable environment for the creative class to foster in India and inculcating the creative culture. It was duly noted that the members of the Creative Class enjoy a wide variety of activities (e.g., traveling, antique shopping, bike riding, and running) these highlight the collective interest in being participants and not mere spectators. This amply gives food for thought for our city builders on what they need to focus on to build the cities of the future.

Published with Business Standard on June 23, 2014.