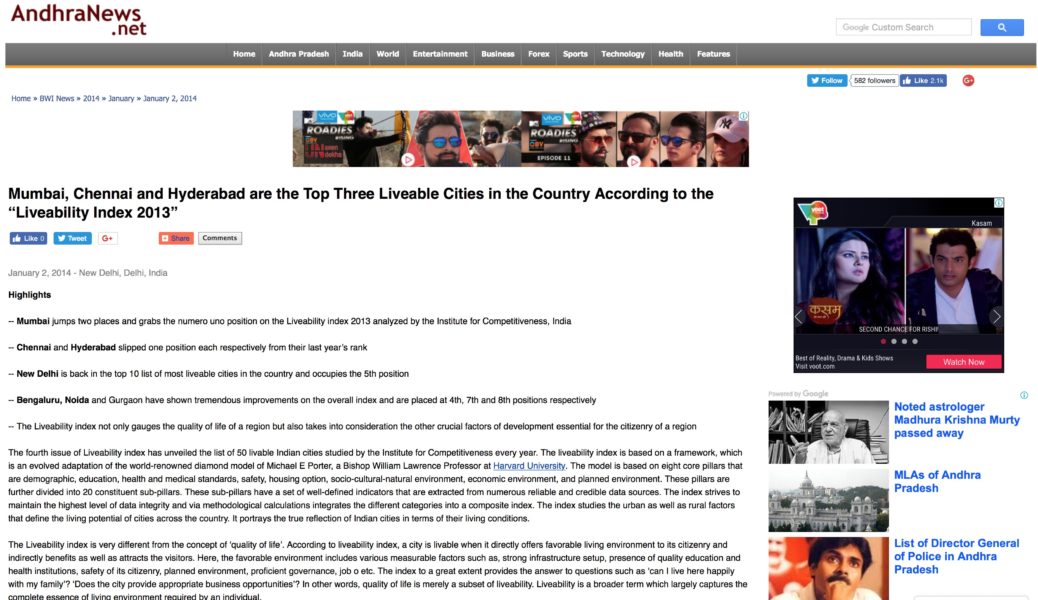 — Mumbai jumps two places and grabs the numero uno position on the Liveability index 2013 analyzed by the Institute for Competitiveness, India

— Bengaluru, Noida and Gurgaon have shown tremendous improvements on the overall index and are placed at 4th, 7th and 8th positions respectively

The fourth issue of Liveability index has unveiled the list of 50 livable Indian cities studied by the Institute for Competitiveness every year. The liveability index is based on a framework, which is an evolved adaptation of the world-renowned diamond model of Michael E Porter, a Bishop William Lawrence Professor at Harvard University. The model is based on eight core pillars that are demographic, education, health and medical standards, safety, housing option, socio-cultural-natural environment, economic environment, and planned environment. These pillars are further divided into 20 constituent sub-pillars. These sub-pillars have a set of well-defined indicators that are extracted from numerous reliable and credible data sources. The index strives to maintain the highest level of data integrity and via methodological calculations integrates the different categories into a composite index. The index studies the urban as well as rural factors that define the living potential of cities across the country. It portrays the true reflection of Indian cities in terms of their living conditions.

The Liveability index is very different from the concept of ‘quality of life’. According to liveability index, a city is livable when it directly offers favorable living environment to its citizenry and indirectly benefits as well as attracts the visitors. Here, the favorable environment includes various measurable factors such as, strong infrastructure setup, presence of quality education and health institutions, safety of its citizenry, planned environment, proficient governance, job o etc. The index to a great extent provides the answer to questions such as ‘can I live here happily with my family’? ‘Does the city provide appropriate business opportunities’? In other words, quality of life is merely a subset of liveability. Liveability is a broader term which largely captures the complete essence of living environment required by an individual.

The most liveable city of India in 2013 is Mumbai which was placed at 3rd position last year. The city has performed well on pillars such as demographics and business. The next two cities, Chennai andHyderabad have moved down one position each and are placed at 2nd and 3rd rank respectively. Bengaluru has taken a jump of 6 places and is at 4th rank on the liveability index 2013. It has moved upwards on pillars like safety, housing options and planned environment. Likewise, Delhi has grabbed the 5th rank on the index and has proved that it indeed should be included in the list of top ten liveable cities. The recent data figures speak volume about the city. It is one of the best cities on the sub pillar and pillar of the economic environment and communication respectively. The city, however, needs to improve on the pillars of safety, and socio-cultural-natural environment to become the most liveable city of the country like it was once in the past.

The other two entrants in the list of top ten liveable cities are Noida and Gurgaon which are placed at 7th and 8th rank respectively. Both of them have done commendably well on pillars of housing options and business opportunity. Their year-on-year slow but steady progress is an indication that they might appear in the list of top five liveable cities of India in the coming years. Contrarily, Pune and Nagpur that were in the list of top ten have reached the 12th and 13th rank respectively in the liveability index 2013. The cities scored low on housing options and natural environment.

Some major ups and downs are visible in the ranks of few cities. The cities that have witnessed an upward motion are Shimla (15th), Mysore (17th), Surat (20th), Dehradun (22nd), Guwahati (32nd) and Srinagar (35th). On the other hand, cities that have fallen from their previous positions are Vijayawada (25th), Vadodara (44th) and Asansol (48th).

The bottom five cities on the liveability index 2013 are Agra, Raipur, Asansol, Kanpur and Patna. Clearly, signifying that they are the least liveable cities among the selected 50 Indian cities and need to take timely action in order to become prosperous in the future.

The index presents a powerful model that comprehensively maps a city’s liveability from various perspectives and presents the real picture of individual city. The report on liveability index 2013 will be available on the shelf from January 25, 2014.

The Liveability Index is an annual study of key factors that determine the degree of liveability of cities in India. It identifies the areas where progress is being made and brings forth the areas where we need to be vigilant and allocate resources to achieve balanced development. The mission of the index is to measure significant drivers of the health and wealth of the community beyond just the monetary value.

The Liveability Report 2013 was covered by AndhraNews.net on January 2, 2014.