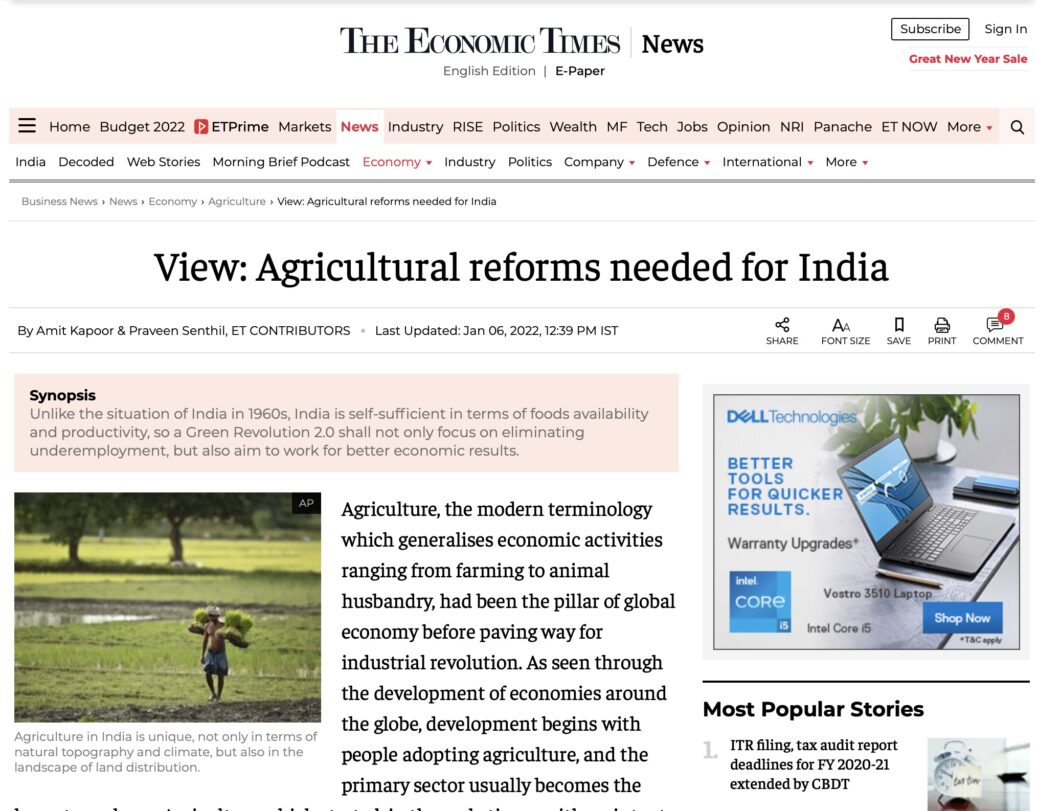 Unlike the situation of India in 1960s, India is self-sufficient in terms of foods availability and productivity, so a Green Revolution 2.0 shall not only focus on eliminating underemployment, but also aim to work for better economic results.

Agriculture, the modern terminology which generalises economic activities ranging from farming to animal husbandry, had been the pillar of global economy before paving way for industrial revolution. As seen through the development of economies around the globe, development begins with people adopting agriculture, and the primary sector usually becomes the largest employer. Agriculture which started, in the early times, with an intent of subsistence, has effectively transitioned itself into a commercial marketplace, resulting in the formation of well-developed marketing systems, that has not only eliminated the thought of “double coincidence of wants”(barter), but has also underlined a need for a powerful exchange mechanism in the form of money.

In India, prior to the Green Revolution (which ramped up the production of wheat and paddy), in the late 1950s and early ‘60s, agriculture was unable to sustain the country’s growing population, and had to undergo serious improvisations in order to achieve a self-sustaining agricultural system. Thus came the technological advancements, as part of the Green Revolution, which improvised irrigation facilities, introduced High-Yielding variety (HYV) seeds to transform agriculture to what we know today. Such reforms are required to correct certain flaws in the system, which are inevitable, and are required for the constant maintenance of the functionality of systems.

Agriculture in India is unique, not only in terms of natural topography and climate, but also in the landscape of land distribution. The average land holding of an Indian farmer is just above a hectare ( Agriculture Census 2015-16), whereas in the USA, an average farmland has an area of 440 hectares. Such meagre land holdings hamper the productivity of farmers, as a large share of the produced crop is utilised for much needed subsistence, limiting the overall profit of farmers. So, any agricultural reform mainly targets these group of marginal/small farmers who generally strive to make a living.

Addressing underemployment
Underemployment/Disguised unemployment in agriculture is another huge problem which exists in India and has its effects on economic growth. It is simply a phenomenon where there are more number of people employed in a particular task than are required, resulting in a low economic output per person. In such a case, the total output doesn’t get affected by the removal of “those extra employees”. This phenomenon mainly exists in the primary sector, and is a result of lack of employment opportunities in rural India (the hub of agriculture activities), and also due to the seasonal nature of agriculture. To reduce underemployment in India, we can plan to provide similar seasonal work to the people and shift their profession to other sectors. Simply, we have to introduce laws similar to the Mahatma Gandhi National Rural Employment Guarantee Act (MGNREGA), introduced in 2005, which aims to provide guaranteed work for 100 days in rural areas. In other words, it provides employment to those underemployed. Not only does MGNREGA help underemployed youth earn reasonable wages( average daily wage in states: Rs.233.3, it also creates a possibility of considering the Indian population as an asset, instead of liability. Such policies also provide a basis for the underemployed youth to get acquainted with other professions, and discover their true potential in terms of economic growth.

In order to prevent further exploitation of our workforce, additional policies focusing on providing permanent employment to the rural population of India have to be brought in. Due to underemployment, the rate of growth of agriculture in India is also subpar (growth rate merely touches 4.5%, in a decade long observation period), given the amount of workforce “engaged” in it. Therefore, it can be implied that underemployment is a loophole in the Indian economy, and its elimination will be crucial for the primary sector to reach greater heights.

Unlike the situation of India in 1960s, India is self-sufficient in terms of foods availability and productivity, so a Green Revolution 2.0 shall not only focus on eliminating underemployment, but also aim to work for better economic results.

Policies To Be Reformed
The new set of solutions can include the development of the present agricultural commercial marketing system, and create a prosperous, and a diverse market for other crops excluding the major cash crops. This way we can definitely impact more farmers and provide an additional choice for them to take up those crops as well. Additionally, setting up of cooperatives in rural India is also required for farmers to thrive more, as cheap credit can help them  ..

Another policy, the MSP, introduced in the 1960s to prevent economic exploitation of farmers, has to be reformed. The intervention by government as an intermediary customer ensured the balance of prices of agricultural crops, and the MSP ensured that farmers got enough profit out of their crop. The philosophy of this policy is very apt, but what needs to be worked on now is the implementation of such policies. For instance, a survey conducted by the National Sample Survey Organisation(NSSO) in 2013 revealed that approximately only 22% of the farmers were aware of the MSP being provided for Rabi and Kharif season crops, which suggests a huge scope for improvement in the implementation of the policy. Though this percentage might have increased over time, educating more agriculture practitioners about laws is vital in order to receive a significant response.

Like Mr. MS Swaminathan, who is credited with initiating the Green Revolution in 1960s, we need more aspirational scientists to uproot the underemployment and other existing problems in agriculture in India.

The article was published with Economic Times on January 6, 2022.