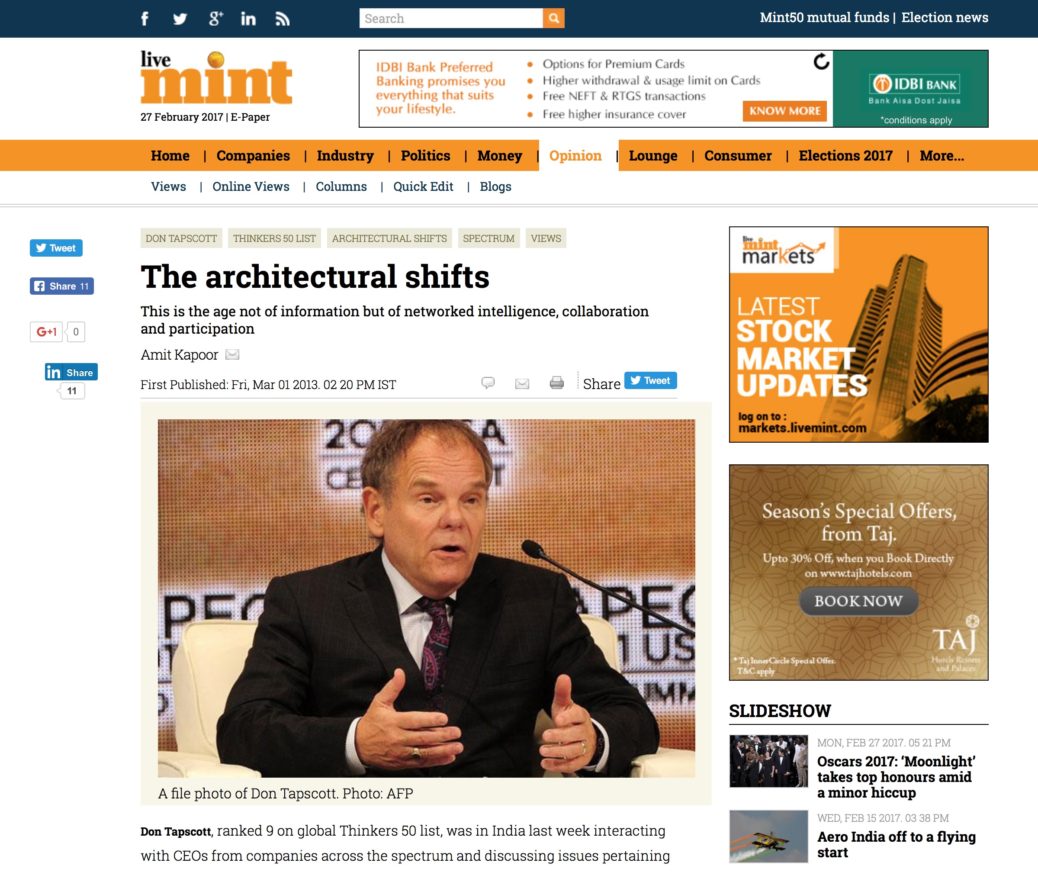 This is the age not of information but of networked intelligence, collaboration and participation

Don Tapscott, ranked 9 on global Thinkers 50 list, was in India last week interacting with CEOs from companies across the spectrum and discussing issues pertaining to the shifts we see within the knowledge industry especially media and education.

There’s an interesting example of what Don epitomizes, thinks and espouses. He recently released a new book that isn’t just the printed words. Rather it is an application. It is certainly texted like a book though with a lot of video, interactive animation, audio, podcasts etc. What clearly makes it stand apart is that the book is social wherein you can participate with the book, the content, the author and most of all you could co-create knowledge.

He goes on to say that media and education are going through a fundamental shift that is leading to very profound changes.

Incidentally mass marketing came about because of the printing press,radio etc. All these though are embedded within the characteristics of the industrial age which was characterized by mass production, mass distribution, mass education and mass media. The competitive advantage was driven by scale and standardization with enterprise at the center and products and services being passed on to the customers. People at this level were clearly inert and passive consumers.

All this has turned on its head bringing profound changes in the world we live in.

All of us are rallying around the ideas pertaining to the collapse of global capitalism. What we are failing to see is that we are not going through a cyclical change rather a secular change. What we are seeing is a punctuation point and a turning point in human history. The industrial age, industrial age institutions and industrial age business models are clearly running out of gas.

Newspapers solved a problem that is no longer a problem. Magazines and newspapers (Readers Digest most recently) have gone bankrupt and reinvented business models (Newsweek) by the singular impact of global shifts we are going through. Youngsters saying “if the news is important for us it will find us” depict this profound change

Today twitter is the newspaper with opinions and point of view being formed within 140 characters. The biggest challenge to avoid is the balkanization and ending up in self-reinforcing chambers driven by a point of view we like. Rather further tough issues stare at us as the older forms of media collapse and stall. The issue could be how do we inform ourselves, learn, disseminate information etc.

Schools and universities are the same models embedded in the relics of the past. The model right now is one size fit all, a passive model of learning rather what we could say the industrial model of learning.

I am a teacher, I have knowledge and you are a student you don’t. Lecture (a model of learning dating back to the 17th century) is a great way of motivating people though not learning. Students today are looking at role models and not information disseminators.

We are sitting amidst a time of great change. The rise of universities and the printing press was certainly seen as an act of grace by God freeing us from the power of the church and imperial rulers. The changes we see today are another step towards freedom from ideas that are relegated to the past and off course we see some strange reactions from our democratic, though at times schizophrenic, leaders. Clearly the change in democracies would be immense howsoever much you try to curtail the youth and the ideas.

The shifts clearly suggest that we need to solve and react to issues and problems in newer ways. The problems are unfortunately being solved by institutions, policies and ideas that are clearly relics of the past.

Without a doubt the industrial revolution was all good. Right now the technology genie is out of the bottle and we are seeing profound shifts.We can clearly see three changes that are redefining our world:

2.The printing press gave us access to the written word whereas the internet enables us to be a producer.

What we see today is not the age of information rather it is the age of networked intelligence, collaboration and participation. Today people can participate in the economy in unthinkable ways where people don’t only read an encyclopedia they can write one. We need to clearly appreciate that the internet did happen though it is not about dotcom, moving up online, websites, clicks, page views etc. The internet is a global computational platform that radically drops transaction and collaboration costs.

It is a time of a vast new opportunity that is driven by technology and is at the intersection of the digital and physical world. We are moving into a realm wherein we are seeing shifts in supply driven businesses getting transformed to demand driven businesses.

The transformation is extensive across the world and what we need to think today is new business models. In case someone asks me about the rationale of the online column then I say that I am using the idea that I believe in and being part of the transformation.

Clearly as Don would say the “future is not something to be predicted but to be achieved”.

The article was published with Live Mint on March 1, 2013.