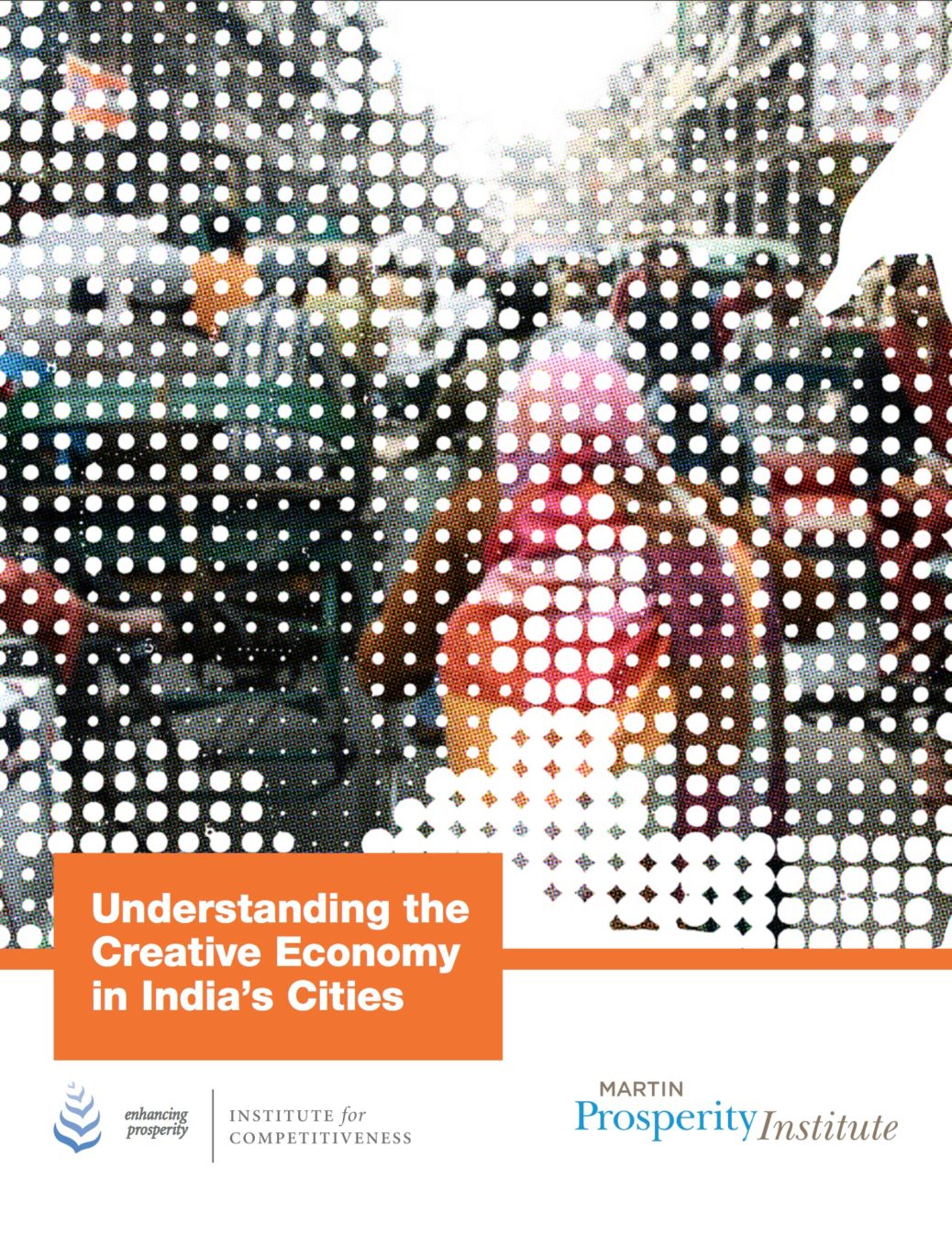 This report sheds light on competitiveness and prosperity of India’s 50 most competitive cities.
The analysis pursues a creative economy perspective against the backdrop of India’s urbanization and economic transitioning from an agricultural and industrial economy to a creativity- and service-based post-industrial economy. The analysis applies the innovative framework of Creative Capital theory and explores the presence of the so-called 3Ts, referred to as Tolerance, Talent and Technology, in each of the 50 cities and compares them to each other. The results of the 3T analysis are then combined
to build the overall Creativity Index of the 50 cities.

The analysis of Tolerance includes three proxy measures due to a lack of census data on visible minorities and LGBT at the urban level. The proxy measures consist of a Religious Diversity Index, population density, and female to male literacy ratio which are combined to build the Tolerance Index of the 50 cities. The six major Tier-I cities of Bengaluru, Chennai, Delhi, Hyderabad, Mumbai and Kolkata, along with the Tier-II cities of Thiruvananthapuram and Kozhikode in Kerala, Guwahati in Assam, and Chandigarh make up the Top 10 Indian cities on the Tolerance Index, followed by Kochi in Kerala ranking 11th.

The analysis of Talent includes five measures, Creative Class share, and a proxy of four measures making up for the lack of census data on the share of population over the age of 25 with a bachelor degree of higher at the urban level. The proxy for degree share consists of pupil to teacher ratio higher than 35 at Upper Primary Level, male literacy rate, female literacy rate, and the number of engineering and MBA schools. In combination these measures build the Talent Index of the 50 cities. Kochi in Kerala leads the Talent Index followed by Mumbai and Thiruvananthapuram in Kerala. The other major cities with the exception of Hyderabad, Pune in Maharashtra, Kozhikode in Kerala and Chandigarh make up the top 10 of the 50 cities.

The analysis of Technology includes only two measures, Tech Connectivity and Tech Access, due to a lack of census data on Tech Education at the urban level. Tech Connectivity is measured by the number of wireless broadband connections per 100,000 and the increase in the number of wireless subscribers per 100,000, and Tech Access is measured by the share of households using a computer or laptop to use the internet and the share of households with mobile phones. Taken together these measures build the Tech Index. The six major cities, as well as Pune in Maharashtra, Ahmedabad and Surat in Gujarat, and Jaipur in Rajasthan, rank in the top 10 of the 50 cities.

The overall Creativity Index, which combines the individual 3Ts, Tolerance, Talent and Technology, and the regional patterns that emerge within each of the individual T analysis. The top 10 of the Cre- ativity Index is lead by India’s six major cities followed by Thiruvananthapuram in Kerala (7th), Pune in Maharashtra (8th), Kochi in Kerala (9th) and Ludhiana in Punjab (10th).

The 3Ts analysis reveals two prevailing and interrelated correlations, first, between scale and performance expressed by major cities ranking predominately very high, and second, between the quality of place and performance expressed by the cities in Kerala known for progressive education policies. These results confirm the general assumptions underlying Creative Capital theory, that, first, urbanization refers to larger and economically more prosperous populations, emphasized as economies of scale and agglomeration effects, and that second, competitiveness, economic growth and prosperity depend more so on productivity, technology and human capital or skill, emphasized by the quality of place.

Thus, both scale and quality of place are closely intertwined. Although India has only been urbanizing

slowly with still two-third of its total population living in rural areas it is expected that 50 percent of India’s total population or 850 million Indian people may live in cities by 2050 — an enormous potential for competitiveness and prosperity. However, in order to unleash this potential the major challenge will be to balance expansion, access to opportunities or equity, and quality.