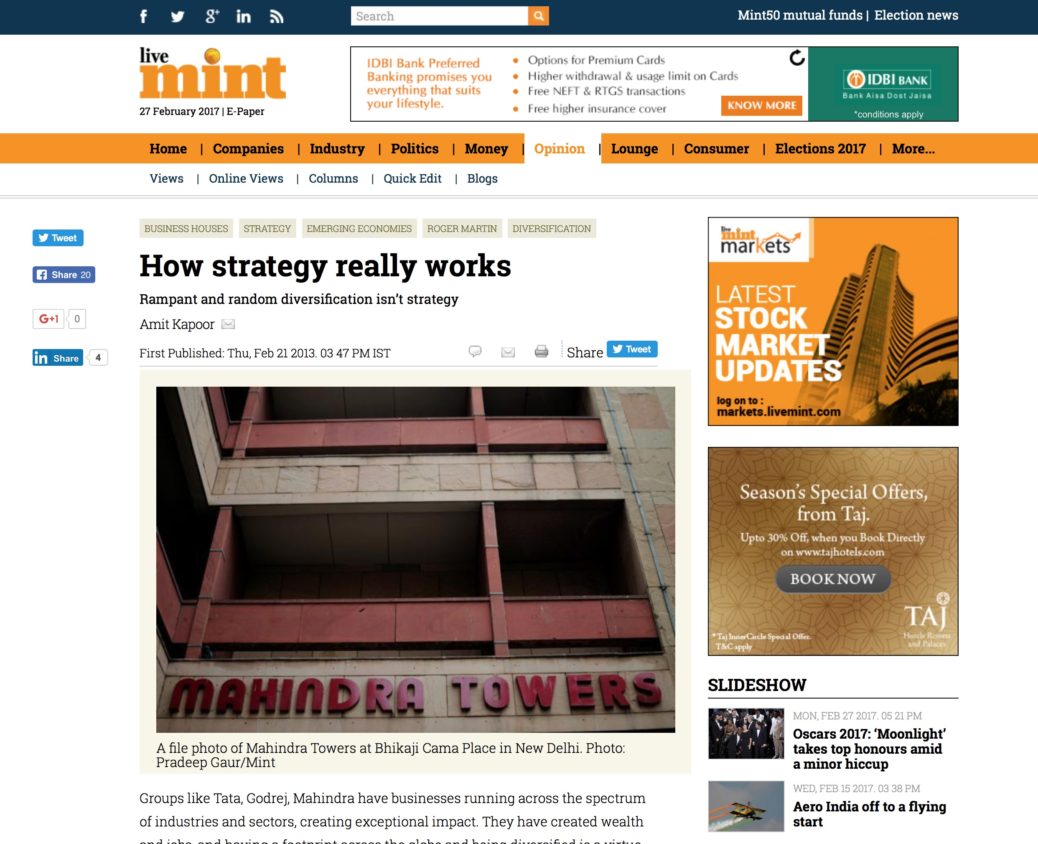 Groups like Tata, Godrej, Mahindra have businesses running across the spectrum of industries and sectors, creating exceptional impact. They have created wealth and jobs, and having a footprint across the globe and being diversified is a virtue for them. We could probably infer that diversification is the key for wealth-creation in emerging economies.

However, Roger Martin, who is dean at Rotman School of Management in Canada and author of Playing to Win — How Strategy Really Works, questions that inference. It is an assumption that these groups are great being in different businesses, he says, but who is it to say they could have been better had they focused on just three to five core businesses?

I believe we have more conglomerates in developing economies as they can play the internal resource allocation game and control the resources. We don’t have a counter argument, as we just can’t do a blind test. Do we even have Tata or anti-Tata hypothesis that we could test?

What we do have is different examples of success and failures within India. ICICI has made some precise choices on how to and where to compete. Going international following the Indian diaspora and not competing with international banks head-on has clearly defined the success of the bank. On the other hand, I am nervous about IT outsourcing and especially the choices that these organizations have made on acquiring customers. Every customer who comes along is a good customer and this is the sort of thing that happens when an industry is growing explosively.

So what are the principles that define what strategy is and what it is not.

Strategy is about choices and incidentally a finite set of choices. It is about deciding what not to do. There are lots of companies who seem to be willing to do just about everything but that isn’t a strategy. This would not work for a long period of time. The idea is for the company to make the logic of strategic choices clear to itself and certainly pen it down. What would have to be done would make clear and certainly test the logic of choices.

Another flaw is that corporates go on to assume that the future would be exactly like the past, what is winning today would be winning tomorrow. The critical factor is to discern what are we assuming to be food for a particular idea; what does it mean for consumers and what behaviour would we see and elicit if a particular assumption is correct. Strategy, incidentally, is as good as the assumptions we include and make in our analysis. The most important question in strategy is not what is true rather what would have to be true.

Not having a view that markets evolve and an understanding of what would change in the next evolutionary change is a critical failure. Businesses should provide sustainable performance, performance in midst of evolutionary shifts, shifts that could be driven by customers, context, competition and corporate choices. The mindset that everything is static leads to actions that are flawed, based on assumptions and perspectives that are biased and leading to performance that is mediocre.

Companies need to create their own event rather than suffering from the endemic that has hit the world of business—competitive convergence. Companies across the board would copy, shamefully so, the strategies followed by the nearest competitors and this would lead to a generic idea of what strategy could be followed. It eventually ends up being a game that is too focused on imitation and copying. Strategy thus becomes more incumbent on where and how to play. As Martin goes on to say “companies like Infosys that will have to define where they want to play and how they want to win. They got to say more than saying that we shall serve all the attractive customers”.

The dire need today is to simplify, do away with clichéd thinking and wear our creative hats.The market share battles and thus the spirits entailed make you think in flawed ways especially reminding us of battles and killing fields, whereas business is about growing, growing beyond the usual pastures and the catchment areas.

Strategy is about the game that we want to play and remember competition is not a zero-sum game.

The article was published with Live Mint on February 21, 2013