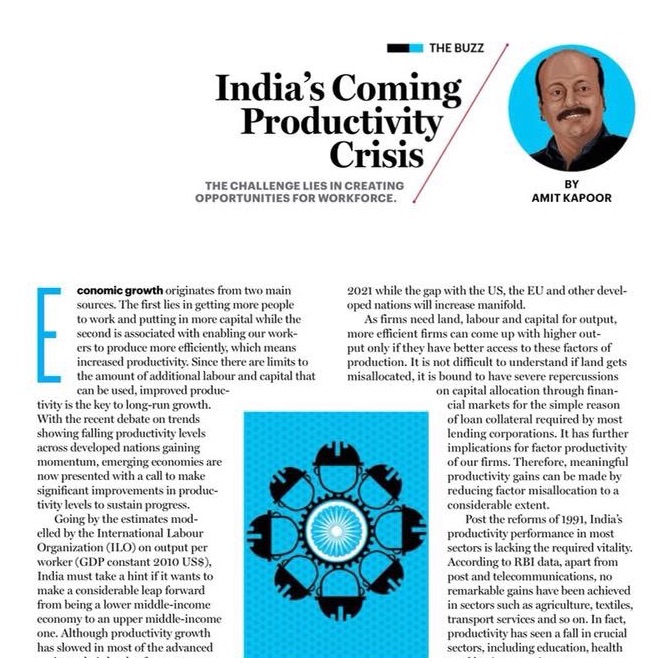 Economic growth originates from two main sources. The first lies in getting more people to work and putting in more capital while the second is associated with enabling our workers to produce more efficiently, which means increased productivity. Since there are limits to the amount of additional labour and capital that can be used, improved productivity is the key to long-run growth. With the recent debate on trends showing falling productivity levels across developed nations gaining momentum, emerging economies are now presented with a call to make significant improvements in productivity levels to sustain progress.

Going by the estimates modelled by the International Labour Organization (ILO) on output per worker (GDP constant 2010 US$), India must take a hint if it wants to make a considerable leap forward from being a lower middle-income economy to an upper middle-income one. Although productivity growth has slowed in most of the advanced nations, their levels of output per worker still tend to remain notably higher than that of India.

As firms need land, labour and capital for output, more efficient firms can come up with higher output only if they have better access to these factors of production. It is not difficult to understand if land gets misallocated, it is bound to have severe repercussions on capital allocation through financial markets for the simple reason of loan collateral required by most lending corporations. It has further implications for factor productivity of our firms. Therefore, meaningful productivity gains can be made by reducing factor misallocation to a considerable extent.

Post the reforms of 1991, India’s productivity performance in most sectors is lacking the required vitality. According to RBI data, apart from post and telecommunications, no remarkable gains have been achieved in sectors such as agriculture, textiles, transport services and so on. In fact, productivity has seen a fall in crucial sectors, including education, health and business services.

The real challenge for India lies in creating a large number of high-productivity opportunities for its labour force where the right mix of skilling must take centre stage. This, in turn, calls for structural reforms in all factor markets by the Centre and the state governments for enhancing productivity and competitiveness in the long term.

The article was published with Business Today in the issue dated May 20, 2018.