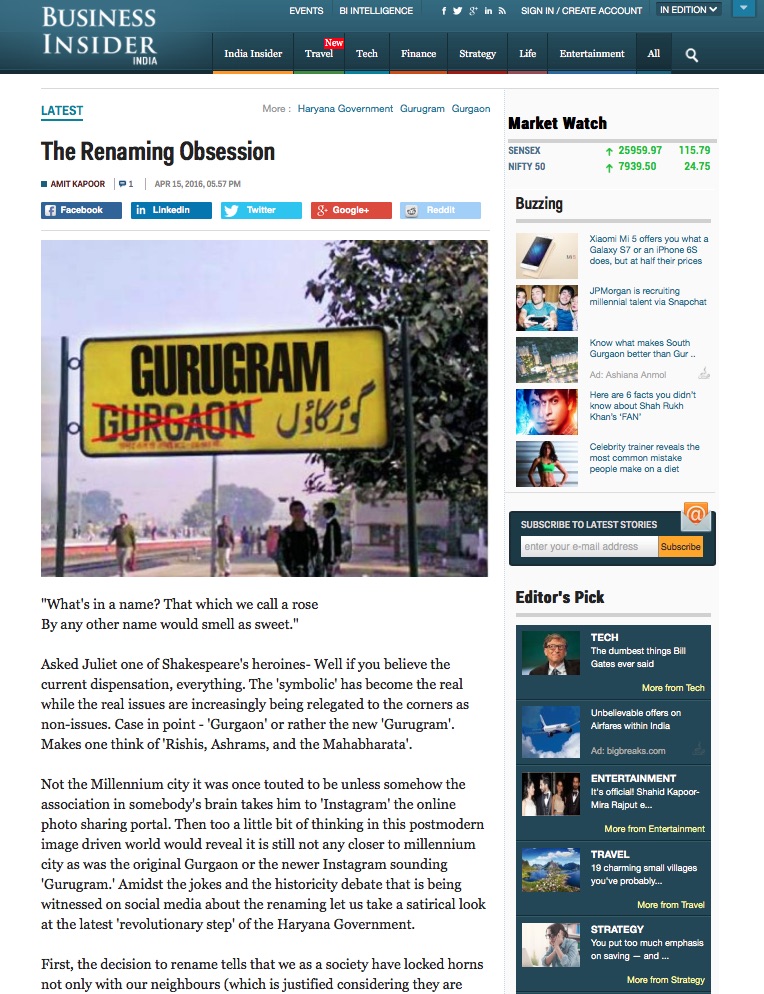 “What’s in a name? That which we call a rose

By any other name would smell as sweet.”

Asked Juliet one of Shakespeare’s heroines- Well if you believe the current dispensation, everything. The ‘symbolic’ has become the real while the real issues are increasingly being relegated to the corners as non-issues. Case in point – ‘Gurgaon’ or rather the new ‘Gurugram’. Makes one think of ‘Rishis, Ashrams, and the Mahabharata’.

Not the Millennium city it was once touted to be unless somehow the association in somebody’s brain takes him to ‘Instagram’ the online photo sharing portal. Then too a little bit of thinking in this postmodern image driven world would reveal it is still not any closer to millennium city as was the original Gurgaon or the newer Instagram sounding ‘Gurugram.’ Amidst the jokes and the historicity debate that is being witnessed on social media about the renaming let us take a satirical look at the latest ‘revolutionary step’ of the Haryana Government.

First, the decision to rename tells that we as a society have locked horns not only with our neighbours (which is justified considering they are also in equally adamant in locking horns) but also with our own past.

This trend is a bit unsettling. Do we want to forge ahead and debate the city’s or the gram’s squalid infrastructure, and its problems of electricity, waste collection problems, problems of slums, health and dirt and dust one witnesses when one moves on the iconic roads here or do we want to debate the guru-shishyaa parampara of the yesteryears? And if we want to discuss both then in what order? Our problem it seems is that we want to correct all that is ‘wrong’ with our ‘long’ past and take India into a glorious future. But that cannot be done only by changing names (naam) but with some work in the city (kaam).

Second, we tend to agree with the government’s rebranding, not because of the sacred geography argument of scholars like Diana Eck, which lends credence to the view that ancient/ mythical is embedded in the geographical places of India. But because we tend to agree with Haryana government as it resets the narrative to the low expectations we should have of our cities and its people.

The symbolic idea of renaming the millennium city ‘Gurgaon’ to a ‘Gurugram’ showcases the low expectations we have of our chosen policymakers and ourselves. Gurgaon, the millennium city, is to be replaced with ‘Gurugram’ the eternal village of the Guru. And being a resident of Gurugram all we can say is that since no work is being done on the ground, barring the perennial digging up and filling up of sections by private contractors the government feels that changing the name can work wonders. Sadly, it doesn’t. All it does is that it makes things worse by focusing on the wrong set of challenges. The problems people face are not of a symbolic nature but of a real one.

Third, the chain reaction post renaming of Aurangzeb road should not be stopped with immediate effect. After all Aurangzeb road as one of the main boulevards of Delhi was symbolic, and its replacement was symbolic, but replacing older names with newer ones for all cities and the boulevards, only shows we as Indians are engaged in mythical battles with our past. So we have had lesser battles on the left and right of the country’s borders, and therefore, we have taken up imaginary ones with our past. And that is the third reason to go ahead and rename all the historical places with ‘correct versions’ however even post that the problems within places will persist.

In a brilliant documentary on Richard Feynman, the physicist Nobel laureate – The Pleasure of Finding Things Out Feynman narrates the story of his father telling him about what a bird is. He goes on explain that when you know what a bird’s name in various languages you really don’t know anything about the bird- all you know about is what humans call a bird in different languages.

So he goes on by mentioning that there is a difference in knowing the name of something and knowing something. The same is true with knowing the problems of Gurgaon and naming/ renaming Gurgaon. The renaming makes no sense until unless the basic problems of people are understood and taken care of by policymakers. And the role of government is not changing names of locations or boundaries under its rule the role of government in a democracy is to deliver on basic services like safety and security, healthcare and education to people. Hopefully, the government takes a cue and moves in the direction of working (kaam) and not just naming (naam) of places.

Published with Business Standard on April 15, 2016.