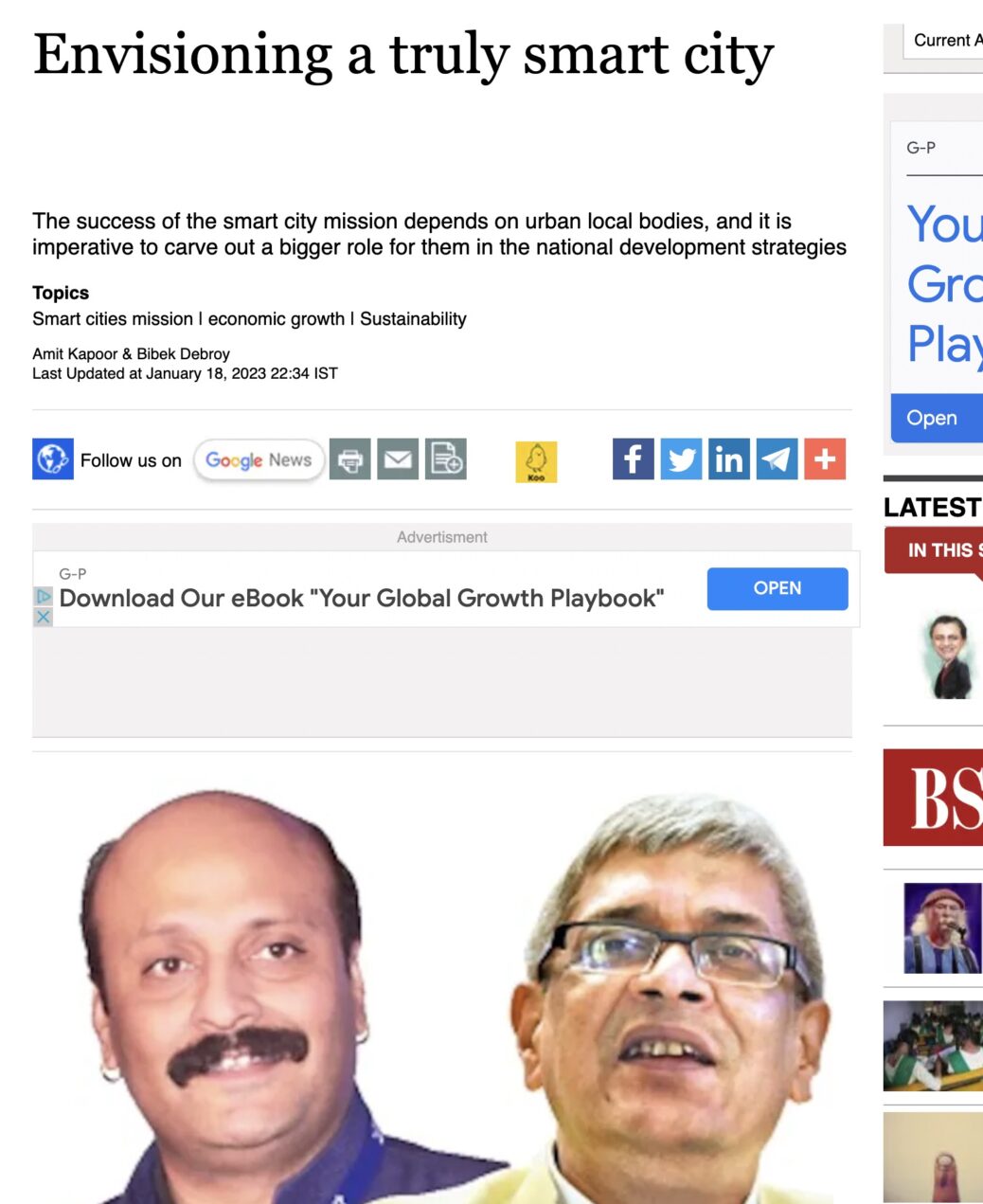 The Smart City Mission, as envisaged by the Hon’ble Prime Minister, is embedded in the idea of promoting cities to be able to provide the utmost ease of living to its citizens in the form of core infrastructural development, ensuring a clean and sustainable environment and ensuring access to resources through the adoption of data-oriented ‘smart solutions’. Through extensive work on the social, economic, physical, and institutional pillars of the city, the purpose seeks to promote economic growth and enhance the quality of life. The goal is to create reproducible models that serve as beacons for other aspirant cities, with an emphasis on sustainable and inclusive development. However, this new face of urbanisation – emanating from India’s strive to adopt innovative, digital and sustainable approaches to achieve its goal – is not unilateral. It is also intrinsically tied to different aspects of governance and especially reforms at the level of local governance in the direction of making Urban Local Bodies and their administrative tools more innovative, adaptive and smart. These kinds of reforms are not linked with financing alone but rather with enhancing the role of ULBs in penetrating the essence of smart cities at every level.

India’s Smart Cities Mission is a centrally funded programme that mandates equal contributions from state governments and urban local bodies (ULBs) for implementing initiatives covered by the Smart City Proposal (SCP). States are expected to look for funding for the initiatives included in the Smart City Proposal from a variety of sources, including but not limited to using the resources of State/ULB (from the collection of user fees, beneficiary charges & impact fees, land monetisation, debt, loans, etc.) Monitoring of the mission is provided at three levels: national, state, and city, according to the smart city guidelines. At the national level, the responsibility for approving ideas, keeping track of progress, and allocating funds fall on an Apex Committee, which is led by the Secretary of the Ministry of Urban Development and is made up of officials from associated ministries and organisations. At the state level, the overall direction of the Smart City Mission would be set by a High Powered Steering Committee (HPSC), which would be presided over by the Chief Secretary of the State. Furthermore, at the municipal level, a  District Collector and the Chief Executive Officer of a Special Purpose Vehicle make up the Smart City Advisory Forum in all Smart Cities. Its responsibility is to release funds and carry out, oversee, and assess projects for the development of smart cities.

According to the Twelfth Finance Commission report, there are 3,723 ULBs, of which 109 are Municipal Corporations, 1,432 are Municipalities, and 2,182 are Nagar Panchayats. The vast number of urban local bodies showcases the potential to leverage growth and development in all critical areas, including housing, sanitation and hygiene, livelihood, IT, health and education, transportation, and the environment. At the same time, it is essential to embed accountability and fiscal discipline in the workings of ULBs, especially for achieving the success of the smart city mission. Through the Smart City Mission, it is perceived that India can be ushered into the new age of governance with a focus on improving the efficiency of urban local bodies. For example, through the introduction of institutions like Special Purpose Vehicle (SPV) – which essentially operate like municipalities but are distinct in their composition and in that is registered as a private company with at least 40% of private investment – a sense of stability in the form of permanent and executive leadership is accorded to urban governance. It is hoped that this will encourage local governments to move towards inter-departmental convergences and the devolution of executive authority to elected officials from the city, such as a mayor, who could ensure more responsible city management.

Urban Local Bodies (ULBs) are essential for the growth of smart cities in more ways than one. The success of the mission, in significant parts, depends on factors like swift and effective leadership. Most importantly, due to their grassroots operations, ULBs can provide a clear vision and a desire to better their community and promote effective and efficient development. They are also a source of useful information about the local environment, bringing forth particular demands that should be addressed and being the voice of consensus. At the same time, there are some critical constraints to these functions in the form of limited jurisdiction and financial bottlenecks. This does not only impede their capacity to function but also to upgrade their skills to function better.

Therefore, a close synergy between the smart city mission and urban local bodies can be conceived when the latter’s scope is enhanced and pushed forward. Beyond increasing the scope of their work and jurisdiction, it is also a matter of realising the role of grass-root governance mechanisms in driving sustainable urbanisation in the country. It is imperative to integrate the Urban Local Bodies within the national development strategies in order to build capacity for sustainable and inclusive urbanisation. Through this, the mission must revolutionise urban governance while strengthening safety nets of accountability and transparency if it is to have a long-term impact on urban development.

The article was published with Business Standard on January 18, 2023.