Want economic growth? Here’s why we should pay attention to our healthcare system! 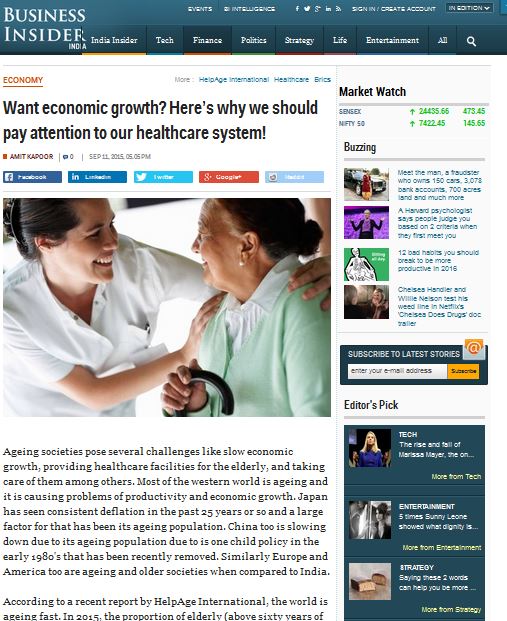 Ageing societies pose several challenges like slow economic growth, providing healthcare facilities for the elderly, and taking care of them among others. Most of the western world is ageing and it is causing problems of productivity and economic growth. Japan has seen consistent deflation in the past 25 years or so and a large factor for that has been its ageing population. China too is slowing down due to its ageing population due to is one child policy in the early 1980’s that has been recently removed. Similarly Europe and America too are ageing and older societies when compared to India.

According to a recent report by HelpAge International, the world is ageing fast. In 2015, the proportion of elderly (above sixty years of age) to the total population was 12.3%. It is expected to rise to 16.5% by 2030 and 21.5% by 2050. The report also has the Global AgeWatch Index 2015 in which India is ranked 71st out of the total number of 96 countries considered for the study. The Index measures and ranks countries according to the social and economic wellbeing of their people. The Index has classified countries as Young, Ageing, High-Ageing and Hyper-Ageing societies. These respectively have below 10%, 10-20%, 20-30% and above 30% of the population that is above 60 years of age to the total population expressed as percentages. India at present thus is categorized as a young society. There are four pillars used for building the Index namely Income Security, Health Status, Capability and Enabling Environment. India performs relatively better on Enabling Environment pillar (52nd Rank) and Capability pillar (55th Rank) while performing badly on the Health pillar (87th Rank) and average on the Income Security pillar (72nd Rank). In the BRICS economies too, India is ranked better than only South Africa. China is ranked 52nd, Brazil is ranked 56th, Russia is ranked 65th, and South Africa is ranked 78th.

India still has a sizeable number of elderly people even though the proportion of people above 60 years of age is 8.9% of the total population. According to the Report, India has roughly 12 crore people above the age of 60. In the world at present, there is a total of 90 crore people above the age of 60 which shows that roughly one in every nine elderly people stays in India. The report also goes on to say that roughly one in four of these 12 crore people has access to pensions in India. This statistic corresponds to the International Labour Organization’s metric of one in four elderly people receiving pensions in low and middle-Income countries. A maintenance of up to a maximum of Rs. 10,000 (US$160) a month is also available to older people for food, clothing, housing, medical attendance and treatment. It is furnished under the State of Maintenance and Welfare of Parents and Senior Citizens Act, 2007. However, the report finds that the awareness of this law is low. A survey done by HelpAge India shows that only 59% of respondents were aware of pension eligibility while no one surveyed was aware of the 2007 Act.

Over the next decade, the governments, private sector and individuals at all levels should look to improve healthcare access to people and look at improving the subjective aspects of their lives and overall well-being in India. It will require a multi-pronged approach with improvements in income security, health care access and treatment as well as a sense of care, generosity and respect towards the elder generation. It will start with a behavioral change and social awakening towards the needs and requirements of the elderly.

Published with Business Insider on September 11, 2015.