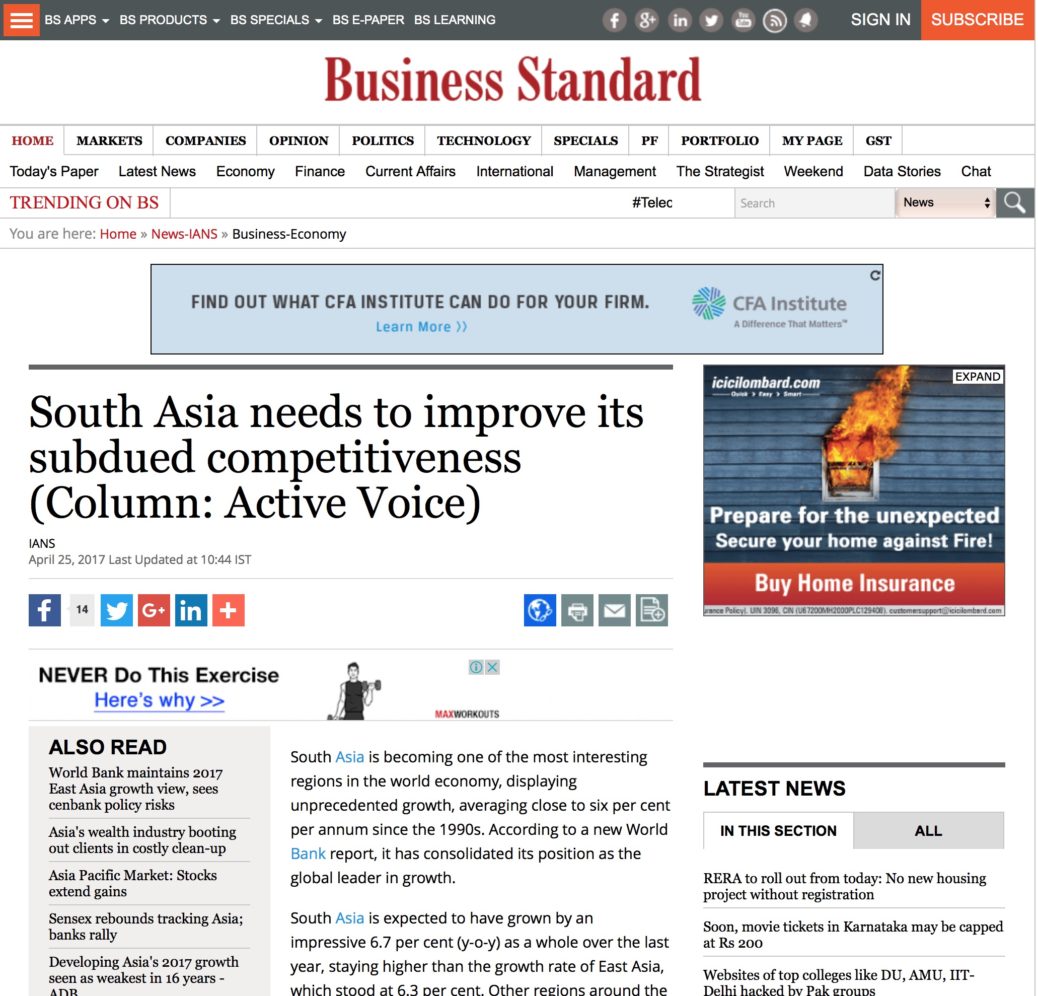 South Asia is becoming one of the most interesting regions in the world economy, displaying unprecedented growth, averaging close to six per cent per annum since the 1990s. According to a new World Bank report, it has consolidated its position as the global leader in growth.

South Asia is expected to have grown by an impressive 6.7 per cent (y-o-y) as a whole over the last year, staying higher than the growth rate of East Asia, which stood at 6.3 per cent. Other regions around the world have either been growing slowly or contracting.

Even though India accounts for more than three-quarters of the region’s GDP, it is not the only country that has pulled the region into a high-growth trajectory. Apart from India, Bangladesh and Bhutan have grown at around seven per cent over the last year. In fact, Bhutan has become the fastest-growing economy in the region owing to its booming hydropower production.

However, there are a few causes of concern as well that can affect the region’s long-term growth. First, investments in South Asia have been second only to East Asia, but declining over the last year, being pulled down by India and Sri Lanka. South Asia’s public debt is also the second-highest across regions. These factors can be inimical to the economic growth of the region in the long run.

Second, and more importantly, South Asia has the weakest trade integration with the world and also within its economies. Globally, the region’s exports account for only around 10 percent of its GDP, which is second-least only to sub-Saharan Africa. As a region, South Asia’s regional trade accounts for less than six percent of its global trade. Now that labour in China is becoming costlier, South Asia can gain considerably by focusing on labour-intensive export industries. The debates about globalisation at least agree on the view that it has been poverty-reducing for developing countries. South Asia can tackle its poverty issues by spurring job creation through higher global and regional integration.

Third, the region has made little progress in diversifying its exports. Between 2001 and 2013, almost 80 percent of South Asia’s export growth came from the sale of the same goods to the same destinations. All South Asian countries have been paragons of particular industries: apparel for Bangladesh and Sri Lanka, business process outsourcing for India and light manufacturing for Pakistan. A lack of diversification in exports can be dangerous for a nation in the long run as industries can easily shift base when operations become uncompetitive in that economy.

Therefore, even though South Asia is currently the fastest-growing region in the world, it is in no way out of the woods yet. A wide range of factors can put the brakes on its run unless and until the region improves its subdued competitiveness. A short-term method is to keep costs low, but the only sustainable path is to increase the productivity of its factors of production. South Asia, however, has seen growth through the accumulation of factor quantities rather than an improvement in their productivity.

A sustainable and efficient mechanism to improve productivity is through agglomeration, that is, through the benefits that arise to firms and workers by locating close together. Research shows that a rise of employment by 10 per cent in a district results in a 0.2-0.9 percent increase in total factor productivity in the firms located within the district.

However, even though South Asia is heavily concentrated in terms of economic activity, the degree of geographic concentration has remained mostly unchanged. For instance, an earlier World Bank report found that the degree of geographical concentration of manufacturing activities in South Asia has hardly changed in the last two decades. South Asian countries have hardly benefitted from the creation of clusters and the productivity that arises out of it. It is due to this reason that industries like electronics, which benefit from proximity among suppliers and manufacturers, could never flourish in the region in a way it did in East Asia, despite the former having competitive labour costs.

If policymakers in the region focus more on raising productivity by encouraging formation of clusters, the region’s growth can become more sustainable in the long run. Competitive factor conditions along with lucrative clusters might attract foreign firms and investment. This would, firstly, tackle the issue of declining investments and rising public debt. Secondly, it would lead to better global integration of the region. Finally, creation of strong clusters leads to setting up of supporting industries around the region, which would also move the economy towards higher diversification.

By 2030, South Asia will be home to more than a quarter of the world’s working adults. Informed public policy moves will define their future.

The article was published with Business Standard on April 25, 2017.