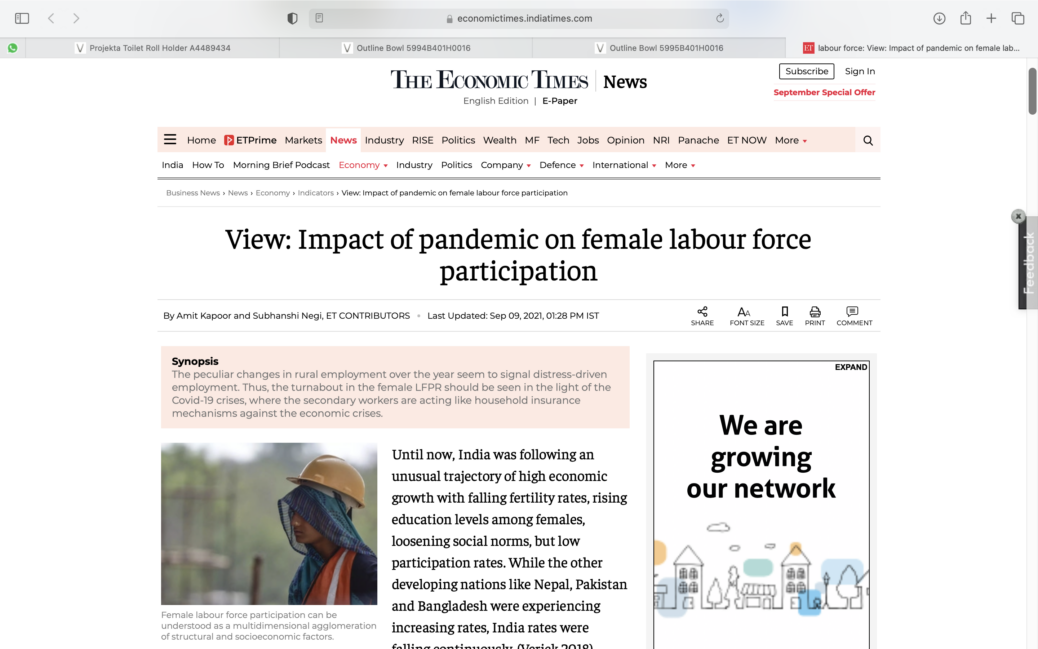 David E.Bloomand Jeffrey G. Williamsonin 1998 highlighted the significance of demographic dividend in developing countries. They state that the benefits of a high working-age population will be missed if women, who form almost half the population, do not join the labor market.

Female labor force participation can be understood as a multidimensional agglomeration of structural and socioeconomic factors. Factors like marriage, motherhood, high education levels of husband/male household head, social norms, religion, and lack of women-oriented jobs reduce women’s probability of joining the labor force. Part of it is countered by positive factors like rising education levels and wages, favorable government policies.

Periodic Labor force Survey, 2019-20, presents a better and a hopeful picture. The female labor force participation rate is observed to be 22.8%, which is about 4.2 percentage points more than that of 2018-19. The major push has come from the rural sector than the urban sector, where it increased by 5 and 2.4 percentage points, respectively.

The increase in the female LFPR could result from the positive force- the growing education of females over the years. However, in urban areas, females having education level beyond middle school had minor contribution to the labor market. whereas, in rural areas, females with low or no education level joined the labor force significantly. Accordingly, it is most likely to be seen as a stress-driven surge due to loss of employment and the livelihood of the masses due to COVID-19.

A similar trend was also noticed during the period 1999-2000 to 2004-05. There was widespread distress in the rural sector, especially the agricultural sector, with price uncertainty, low productivity, and stagnation leading to indebtedness, which pushed women to join the labour market. Thus, a new peak in the female LFPR was achieved in 2004-05. Similarly, a drought in 1987-88 also led to the surge in female LFPR.

Unlike, the traditional framework of labor market, which presumes that an individual maximizes his utility based on a division of time between leisure and labor work, women’s decision to join the labour force or not, is based on her ability to allocate time among leisure, work at home, and work at labor market (Mincer 1962). The neo classical theory furthers breaks down when the household is below or near the subsistence income level. Under such circumstances, there is a limited amount of choice between work and leisure. During an economic setback, households belonging to the lower percentile of income distribution follow a joint utility function of the household, which involves acquiring the subsistence income for all members of the family. Generally, the ‘breadwinners’ who are the primary workers either lose their jobs or the current wage earnings are insufficient to meet their livelihood. Subsequently, secondary workers, which mostly comprises of women, enter the labor market for paid employment, leaving their previous status of being domestically engaged.

Mainly, when the economy recovers, expanding the employment opportunities and wages, the secondary workers withdraw from the labor market. This occurs because women belonging to the vulnerable economic group join the labor force out of need rather than willingness. And when that need is no longer there, they bounce back to their previous domestic duties. Further, even the social responsibilities of marriage, motherhood, caste, and religion do not let women survive in the labor market for a long time.

Lockdown imposed due to Covid-19 resulted in an economic crisis, which led to the fall of substantial primary workers, especially the causal and salaried workers, as markets all over India were shut down for an unforeseeable future. On the other end, there is a 3.4 percentage point increase in the self-employed category of women in a rural area, which is predominant in agriculture and allied activities. Other casual and regular salaried females experienced a decline in employment.

The peculiar changes in rural employment over the year seem to signal distress-driven employment. Thus, the turnabout in the female LFPR should be seen in the light of the looming COVID-19 crises, where the secondary workers are acting like household insurance mechanisms against the economic crises. The surge in female participation can fall back to the low and declining rates if we are unable to retain the additional female workers in the labor market.

The article was published with Economic Times on September 9, 2021.