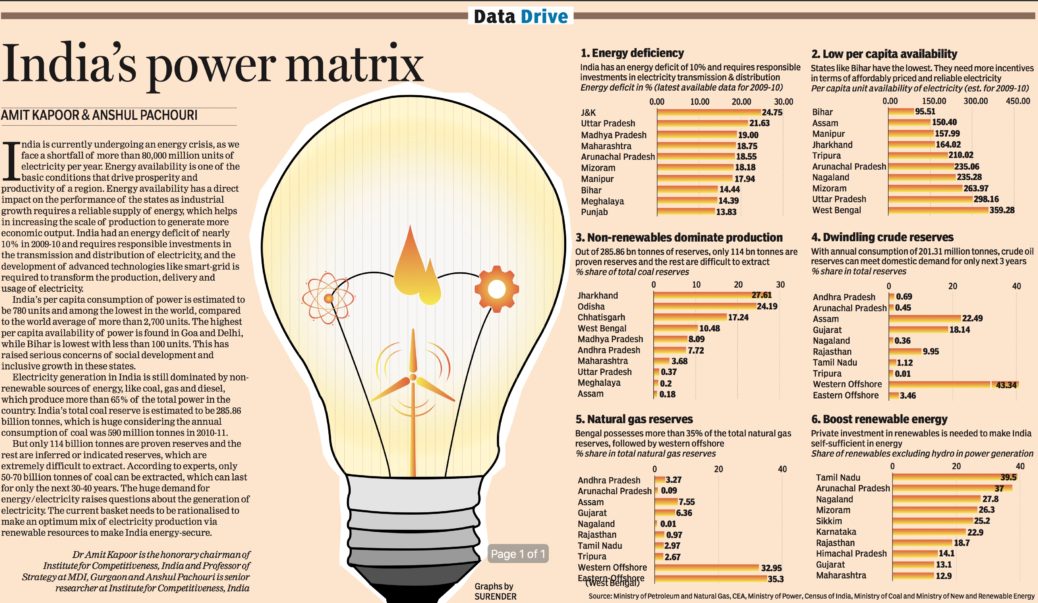 India is currently undergoing an energy crisis, as we face a shortfall of more than 80,000 million units of electricity per year. Energy availability is one of the basic conditions that drive prosperity and productivity of a region. Energy availability has a direct impact on the performance of the states as industrial growth requires a reliable supply of energy, which helps in increasing the scale of production to generate more economic output. India had an energy deficit of nearly 10% in 2009-10 and requires responsible investments in the transmission and distribution of electricity, and the development of advanced technologies like smart-grid is required to transform the production, delivery and usage of electricity.

India’s per capita consumption of power is estimated to be 780 units and among the lowest in the world, compared to the world average of more than 2,700 units. The highest per capita availability of power is found in Goa and Delhi, while Bihar is lowest with less than 100 units. This has raised serious concerns of social development and inclusive growth in these states.

Electricity generation in India is still dominated by non-renewable sources of energy, like coal, gas and diesel, which produce more than 65% of the total power in the country. India’s total coal reserve is estimated to be 285.86 billion tonnes, which is huge considering the annual consumption of coal was 590 million tonnes in 2010-11.

But only 114 billion tonnes are proven reserves and the rest are inferred or indicated reserves, which are extremely difficult to extract. According to experts, only 50-70 billion tonnes of coal can be extracted, which can last for only the next 30-40 years. The huge demand for energy/electricity raises questions about the generation of electricity. The current basket needs to be rationalised to make an optimum mix of electricity production via renewable resources to make India energy-secure.

This piece was published with Financial Express on May 19, 2012.