Budget 2018 will be Modi govt’s biggest challenge in 4 years. Here’s why 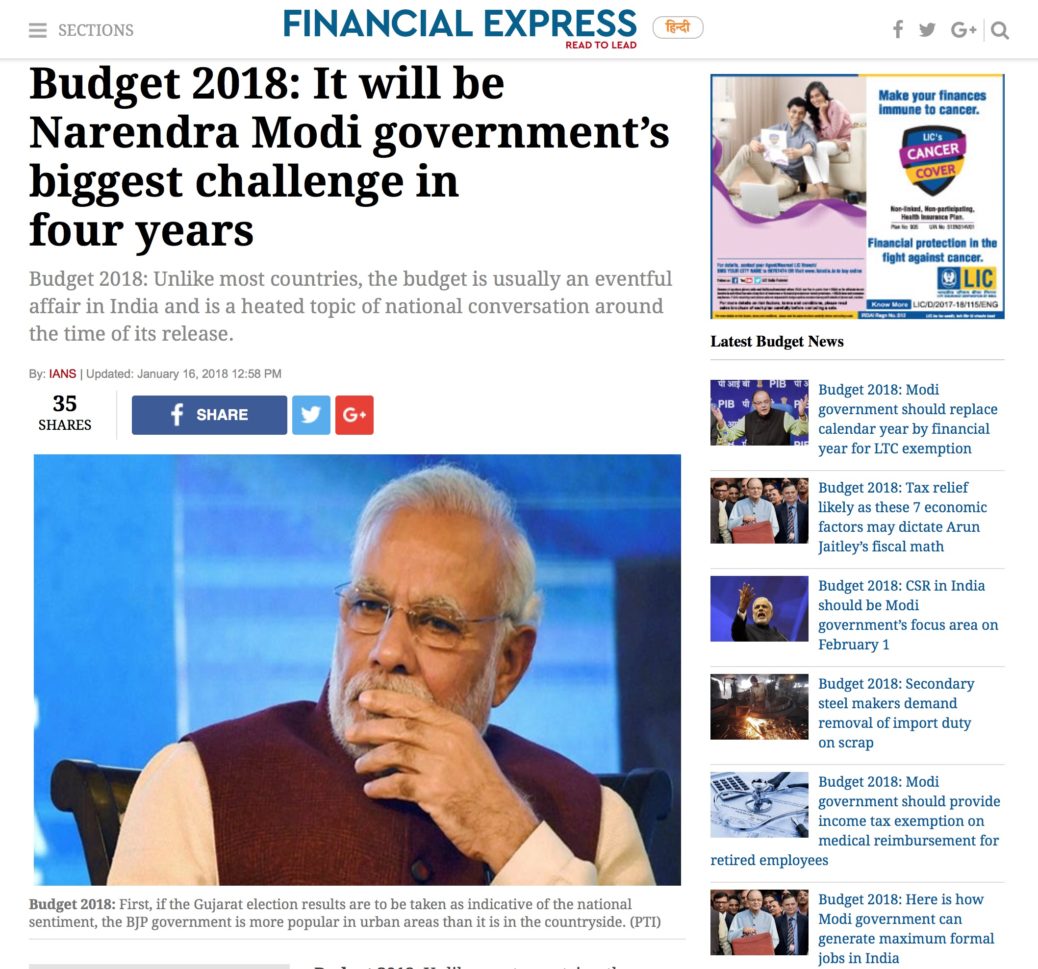 Budget 2018 will be Modi govt’s biggest challenge in 4 years. Here’s why

Unlike most countries, budgets are usually an eventful affair in India and are a heated topic of national conversation around the time of its release. The underlying national interest behind it is mostly because the budget holds something for everyone ranging from a small farmer to a big industrialist. However, from this year onwards much of its sheen will be off by a bit.

The tinkering of indirect taxes, which was an aspect of the budget that affected everyone in all corners of the country, is not within the Centre’s domain anymore. Since the implementation of the Goods and Services Tax (GST), all indirect taxes except for custom duty have to be decided upon by the GST Council instead of being annually altered based on short-term political interests. Therefore, the first budget after the GST reform will be a challenging one for the government.

The fact that this will be the last full budget before the 2019 elections and that the government has already spent all of its budgeted expenditure for this financial year will further complicate matters. The oncoming elections affects the budget in multiple ways. First, if the Gujarat election results are to be taken as indicative of the national sentiment, the BJP government is more popular in urban areas than it is in the countryside. The recently released CSO growth estimates show why. The farm and allied sector grew at 2.1 percent in the current fiscal as compared to 4.9 in the preceding year. So, the ailing agricultural sector will receive a much-needed redressal in the upcoming Budget. In fact, the Finance Minister has already confirmed the same. Reviving growth in the sector can also be a viable mechanism for job creation; another economic aspect that the government will be looking to address with the budget.

Second, with the elections around the corner firming up economic growth will be foremost on the government’s agenda. Investments have declined from 34.3 percent of the GDP in 2011-12 to 27 percent of the GDP in 2016-17. They still do not seem to have picked up. First advanced estimates show that it has further fallen to 26.4 in 2017-18. The Centre for Monitoring the Indian Economy (CMIE) estimates show that new investments proposals are likely to amount to around Rs 8 trillion in 2017-18, which would be merely 60 percent of the new proposals made in 2016-17. This would also be the lowest since 2004-05.

The subdued investment activity has been a result of the twin balance sheet problem that is now two budgets old. Clearly, it has been a difficult dragon to slay. Hopefully, a resolution should be in sight when the Rs 1.35 trillion-bank recapitalisation plan comes into force. The budget will bring about more clarity on the exact specifics of the plan and how it will affect government finances.

Third, the government will be in a tight conundrum to balance the budget between going populist in an election season and sticking to the fiscal deficit target. It is almost certain that the government will breach the fiscal deficit target this year after revenue collection in the new tax regime is mostly turning out to be lower than expected forcing the government to borrow an additional Rs 500 billion. This puts the government’s net borrowing at the highest level since 2013-14. Moreover, it needs to be pointed out that this figure does not include the Rs 800 billion meant for bank recapitalisation this fiscal.

Therefore, managing finances for the next fiscal will be a challenge considering the current scenario. The fact that the economy is not growing at full throttle is not helping either. The government will have to take a call on curbing its spending to maintain the deficit and sacrificing growth partly or splurge and maintain higher deficit next year as well, risking inflation in the process. The elections make it enticing to choose the populist route and breach the fiscal ceiling. A case can be made that growth should be prioritised over maintaining fiscal target, but reneging on the commitment will diminish government credibility and that is more harmful in an economy in the long run. Rewiring the FRBM law to make it counter-cyclical in nature would be a better route to adopt.

All factors considered, this budget presents the biggest challenge to the Modi government since coming into power. Low growth numbers, subdued investment sentiment and widening deficit when elections are around the corner leave a Herculean task at hand. The balance between populism and fiscal restraint will be difficult to manage. In any case, the document that will be taking the centre stage on February 1 will be a define the course for a lot of things to come.