Slavery a disturbing truth in India 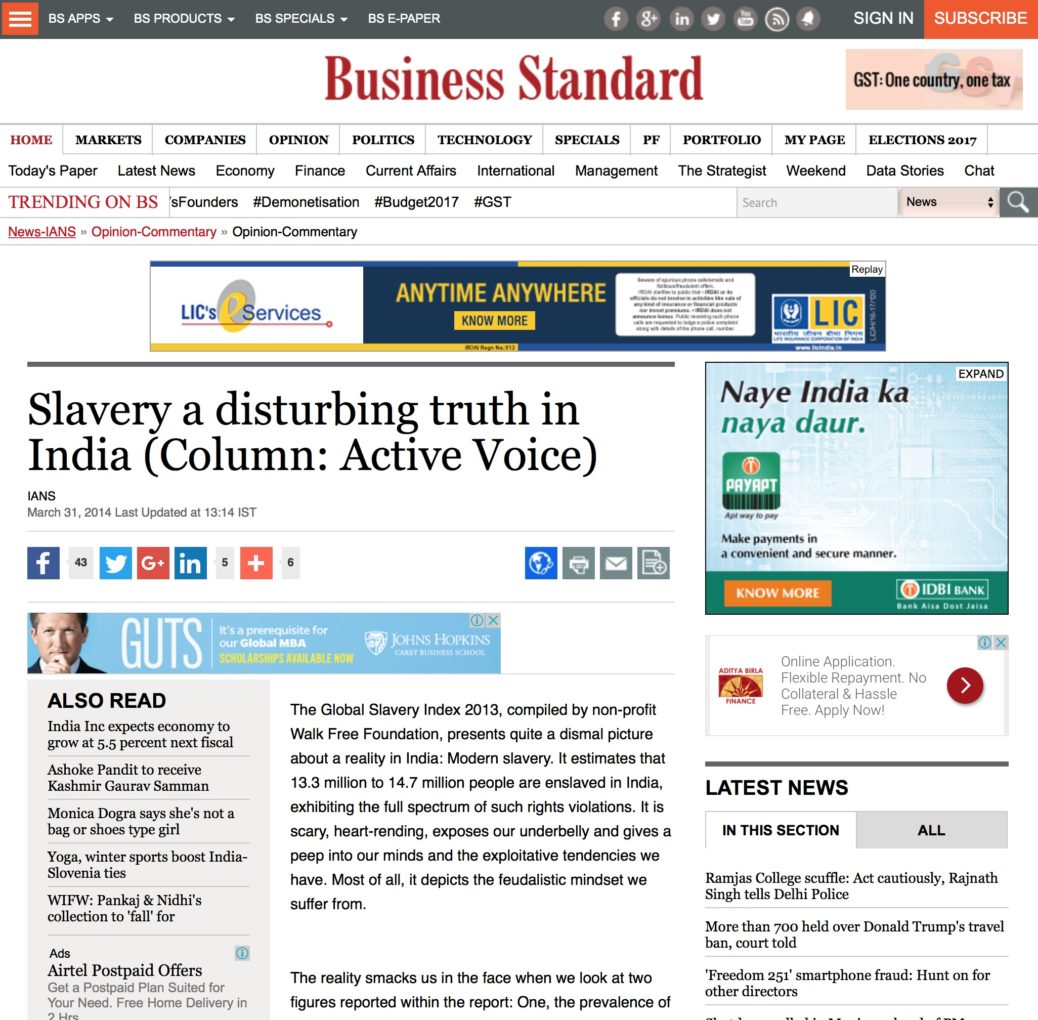 The global slavery index 2013 gives us quite a dismal picture about a reality in India. The reality is scary, heart rending, exposes our underbelly, gives a peep into our minds, the exploitative tendencies we have and most of all the feudalistic mindset we suffer from. The reality smacks us on the face when we look at two figures reported within the report i.e., the prevalence of modern slavery is fourth highest in India and in absolute terms India enslaves the highest number of people.

In recent times we have had debates on exploitation of domestic help though none of us has had the courage to look at our under belly, the underlying attitudes or mindsets.

You would be clearly horrified at hearing some incidents and treatment mated out to domestic help (will use the word servant further on though severely detest the usage of the word). The threats and issues servants would face are –

you would be thrown out of locality if they don’t work sixteen hours during the day, not being allowed drinking water from the home kitchen, being pushed to getting drinking water from home, throw things at the face of the servant, refusal to stand  or entering the lift if the servant or his kids are standing, not allowing a simple comfort in washrooms like water heaters, different park  for the kids of domestic help, not being able to attend to the ailing daughter who is to be operated as household chores are yet to be completed, threatening to disconnect water and electricity connection if not working long enough and most of all stating the kids of servants are like cockroaches as they are worthless.

Worst still this idea of discrimination is propagated through the kids in the house, as they are not told to respect the individual who works at home.

Strangely enough all the above incidents are attributed to spouses of bureaucrats living within one single locality in Delhi. The problem we discuss is something that is prevalent across the board in India and exemplified by spouses of bureaucrats who end up exploiting the system far more then we can fathom or think of. This might not be true for all but even if it is a reflection of twenty percent of officer households then it is a scary reality.

India does have an act to protect the exploited though this is an act that rather ends up being an ineffective tool. The impact is limited as the perpetrator quite likely is the one who has the responsibility of serving and protecting the people within the country. Put in different way it can be said that the law is ineffective since the exploited most of the time are under servitude of an officer, a bureaucrat or a person who yields disproportionate power in the system and the servants are too scared to complain.

I am not too sure if India or any Indian had thought that this would be the treatment that would be mated out to its citizens at the time of independence. The disheartening idea here is that this treatment is no different from the most horrific statements Indians had to live by i.e., Indians and dogs not allowed. The only thing that could be the saving grace in this case is that we are under the rule of a brown sahib if nothing else.

Let us not forget that people who are at our homes are individuals who need to be respected for what they contribute and not shouted at or yelled at. It is rather individuals who shout or mistreat who have ended up becoming slave to their pathetic mindsets. The mindsets that can only fathom exploitation, treating people like animals, thinking that you have servitude rights over people and misdemeanor that is clearly repulsive.

What matters here is how we set this exploitative tendency right and take immediate action or else the social upheaval it may cause would be exceedingly difficult for anyone to control or handle.