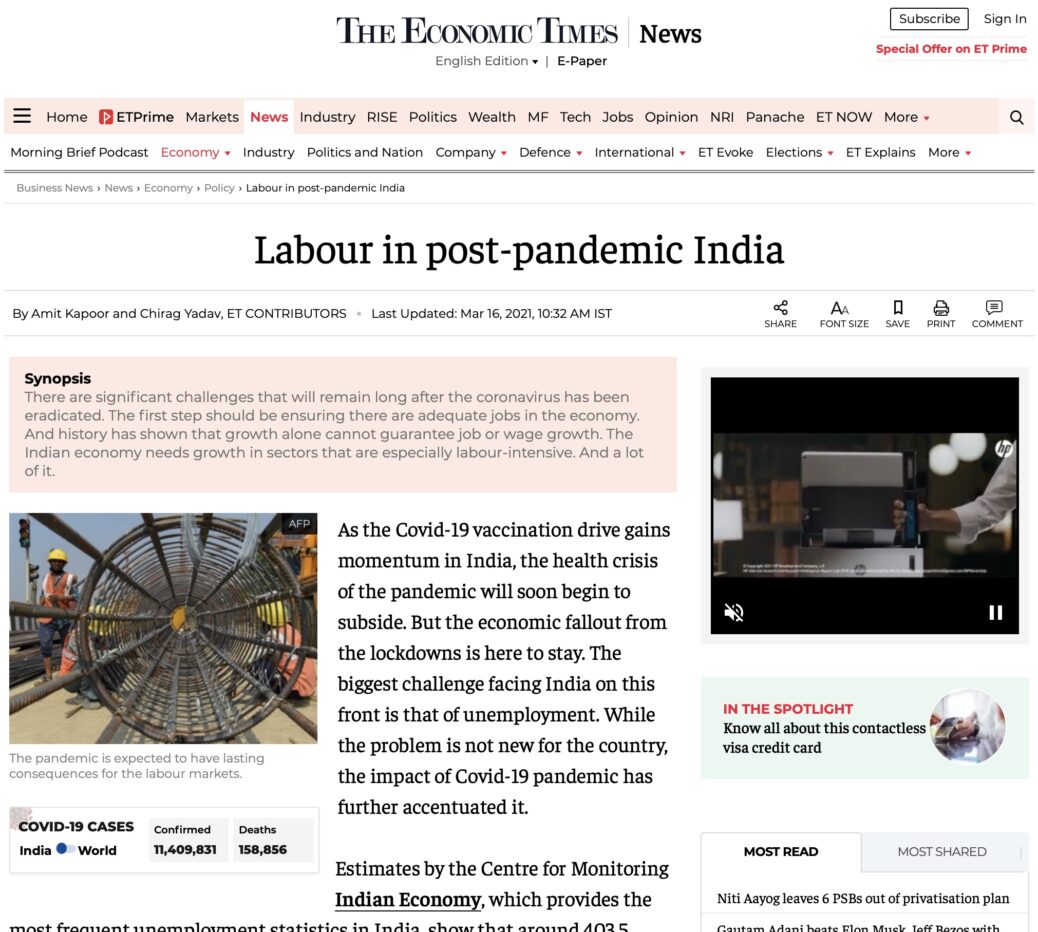 As the COVID-19 vaccination drive gains momentum in India, the health crisis of the pandemic will soon begin to subside. But the economic fallout from the lockdowns is here to stay. The biggest challenge facing India on this front is that of unemployment. While the problem is not new for the country, the impact of COVID-19 pandemic has further accentuated it.

Estimates by the Centre for Monitoring Indian Economy, which provides the most frequent unemployment statistics in India, show that around 403.5 million Indians were a part of the workforce and about 35 million were unemployed before the COVID-19 crisis. Each year about 10 million new entrants also join the workforce. However, by January 2021, only 400 million Indians were employed. Thus, not only has the market been dismal for the new job seekers, but millions of people have lost employment as well.

It can be estimated that somewhere between 40 to 45 million people today must be unemployed in India. And this number does not capture the true extent of unemployment in the country. Given India’s level of economic development and lack of social security benefits, relatively few people can afford to stay unemployed. So, there is bound to be a significant prevalence of disguised unemployment, that is, people are working below their potential.

Further, people are only termed unemployed if they are looking for a job and cannot find one. But not everyone who enters the working age population seeks a job. There could be a variety of reasons why this could be the case, but cultural norms and safety in general dictate that women participation in labour force is quite low in India. In fact, ILO estimates show that India’s female labour force participation is not only lower than the world average but has declined by 6.9 percentage points between 1990 and 2016.[1]

Similarly, even men can become discouraged to look for jobs, albeit to a lesser extent, if prospects are too bleak. In 2018-19, the overall labour force participation rate for India stood at 37.5 percent. It was much lower for the 15-24 age group at 27.39 percent. So, the unemployment statistics do not reflect the true extent of people who are unable to work at their full potential. The COVID-19 pandemic has only added to the concern.

The pandemic is expected to have lasting consequences for the labour markets. A straightforward impact will arise from an increase in pool of unemployed workers, which will reduce their bargaining power and, thus, wages. In India, the introduction of the new labour codes will work to further diminish the bargaining power of labour as they give employers the flexibility to hire and fire workers and restricts the right to strike. Even though these were long-pending and necessary reforms, their introduction in a period of economic downturn will hurt the most as the outside options for workers are low.

These factors will add to the long-term decline in the labour share of national income. The data from Annual Survey of Industries shows that between 2000-01 to 2015-16, labour productivity had an average growth rate of 2.8 percent while real wage grew at an average of 0.9 percent.[2] The decoupling of productivity and wages will further widen due to the pandemic. A recent study by Princeton’s Steven Strauss has argued how industry concentration will increase in the post-pandemic economies.[3] The higher returns to e-commerce, automation, and technology will allow a few big companies to replace small businesses and leave various markets with few competitors. Such trends will further dampen the labour’s ability to demand higher wages (or at least commensurate with their productivity contributions) and better working conditions.

The Indian state has to step in to boost the bargaining power of workers by ensuring decent minimum wage and adequate social security. The new labour codes incorporate these safety cushions, but everything will boil down to implementation. The Code on Wages, for instance, sets a national floor wage but the amounts are yet to be notified. Setting a uniform minimum wage soon can provide significant economic security to Indian workers, especially those working at low-paying jobs. Another notable move is that the Code on Social Security allows the government to extend social security benefits to unorganised, platform, and gig workers. However, there are fears that companies might end up passing on these costs to workers themselves by reducing in-hand income.

So, despite the best efforts, there are significant challenges that will remain within the Indian labour markets long after the coronavirus has been eradicated. The first step should be ensuring there are adequate jobs in the economy. And history has shown that growth alone cannot guarantee job or wage growth. The Indian economy needs growth in sectors that are especially labour-intensive. And a lot of it.

The article was published with Economic Times on March 16, 2021.

[3] Strauss, S. (2020). Some Emerging Hypotheses on the Economic Opportunities and Challenges of the Post-Pandemic World.