Innovation in India: Distance Traversed and Road Ahead 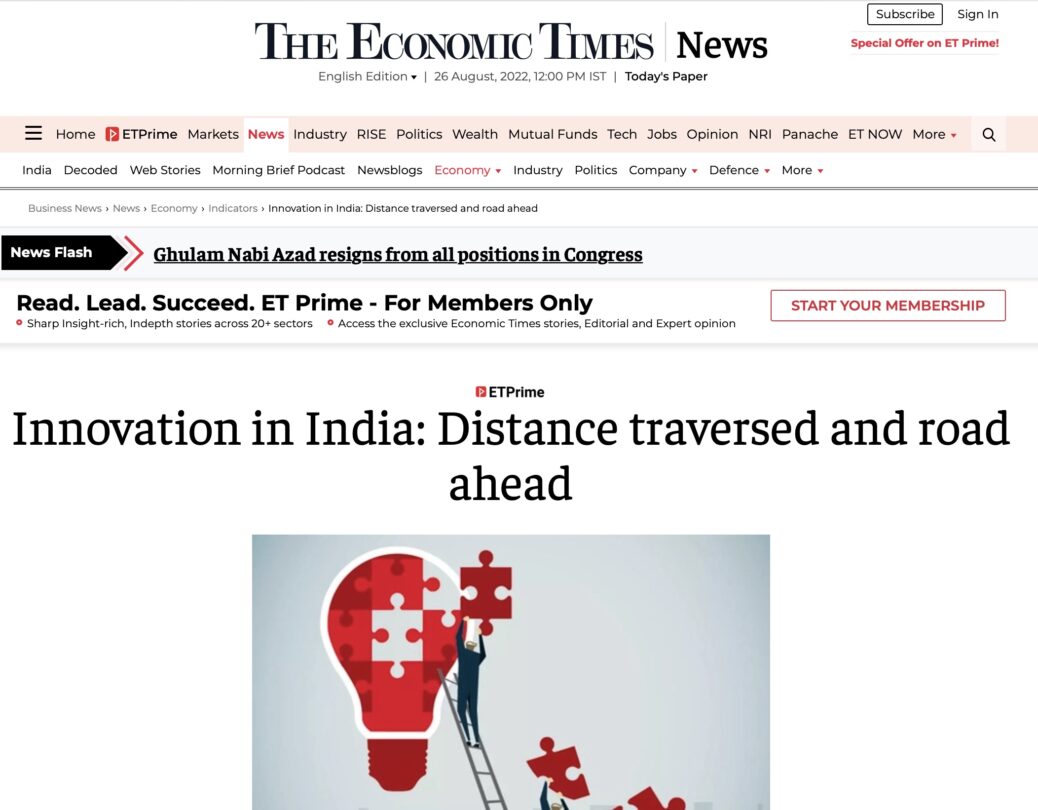 With a continuous evolving innovation landscape, regions like Bangalore, Mumbai, Delhi, Chandigarh, Hyderabad, among others have emerged as innovation hubs of the country. This can be attributed to a combination of various factors like their good education infrastructure, high number of start-ups, tie-ups with MNCs, their risk-taking attitude, among others which have enabled them to create an innovation ecosystem. It is not that this ecosystem has developed overnight, rather it took years of continuous efforts on part of these regions by investing in their human resource, expanding their physical infrastructure, and their constant endeavours in creating a conducive business environment in terms of various fiscal incentives. Overtime, these regions were able to instil business confidence that brought in investment in various sectors. But has this innovation ecosystem improved over the last year? The answer lies in what the recently released ‘India Innovation Index 2021’ refers to as ‘distance to frontier’.

As per the report, ‘distance to frontier’ (DTF) refers to the difference between the actual value and the best possible value (100) of a region based on certain paradigm(s). For example, if a state score was 35 last year, then its DTF becomes 65. In this way, the report tries to make a comparison on whether states/UTs have been able to improve their DTF gap, and if yes, then what led to that improvement.

The question that comes forth is what were the enabling factors that led these states to close the DTF gap? After analysing data, one is able to comprehend that all these states have worked on their ‘human capital’. Be it at school or college level, all states have shown promising improvement in human capital domain. For example, the percentage of schools with ICT labs increased from about 29% to about 46% in Karnataka. In Telangana, this increased from 17% to 35%. Likewise, this percentage increase was large in Delhi whereby it increased from about 46% to 94%. These states also had one of the best pupil-teacher ratios (PTR) in higher education in the country. To give few examples, the PTR stood at 15:1 in Karnataka, whereas it stood 22:1 in Manipur and Andaman & Nicobar Islands.

It is well established that investment in human capital brings about returns not just in terms of high skilled labour but also in terms of improved outputs like improved efficiency, better product design, and an opportunity to advance towards more sophisticated and knowledge-based sectors like automobile, space applications, etc. which demand more nuanced research and product development. In this vein, people also get a chance to get their IPRs patented which allows them to recover their costs and gain profits on their innovation or invention. Therefore, a high performance in human capital indirectly manifests itself in high number of patents and trademarks. This is what happened in the case of these top performing states whereby their high performance in the human capital got reflected in terms of improvement in number of patents, trademarks, and industrial designs filed. For example, almost all states mentioned above registered an improvement in their numbers of either patents, trademarks or industrial designs.

Moreover, these states were able to register growth in their number of start-ups. To give some figures, the number of start-ups increased from about 11,000 to 19,000 in Karnataka. In Telangana, the number increased to about 9,000 from about 4,900. Similarly, Delhi managed to increase its start-up strength from about 13,800 to about 22,900. It is interesting to see that how the start-up ecosystem has risen in the past few years with various states having their own innovation or start-up policy. Uttarakhand, for example, has a start-up policy (2018) which aims to provide a conducive environment to nurture start-ups in the state. Andaman & Nicobar Islands also has such a policy (2018) in place.

But what’s crucial here is to understand that although all these states were able to perform well in human capital, they weren’t able to mark discernible improvement on other pillars like knowledge workers, investment, business environment, among others. Thus, the states need to ensure a more holistic development since merely focusing on human capital would not improve their overall innovation landscape. Innovation is a marathon and not a sprint and thus merely putting all effort in human capital would not bring about change. Developing a holistic innovation landscape requires equal attention to other pillars with the acknowledgement of the fact that it is not an overnight process, and would take years to sow the seeds for it to actually start bearing fruits in long run.

As for other states like Andhra Pradesh, Bihar, Uttar Pradesh, Sikkim, Nagaland, Puducherry, Lakshadweep, among others, who weren’t able to close their DTF gap by much (less than 10 points), there is a long road to traverse. These states need to create a robust innovation climate wherein people are not just encouraged to indulge into more R&D activities but enterprises also get attracted to invest in the same. With relatively weak education infrastructure, and a less robust business environment, these states need to learn from their peers and adopt successful strategies for the well-being of their state which would help India to move towards its goal to become the innovation capital of the world.

The article was published with Economic Times on August 4, 2022.