Jawaharlal Nehru should be understood in the context of his times, not ours 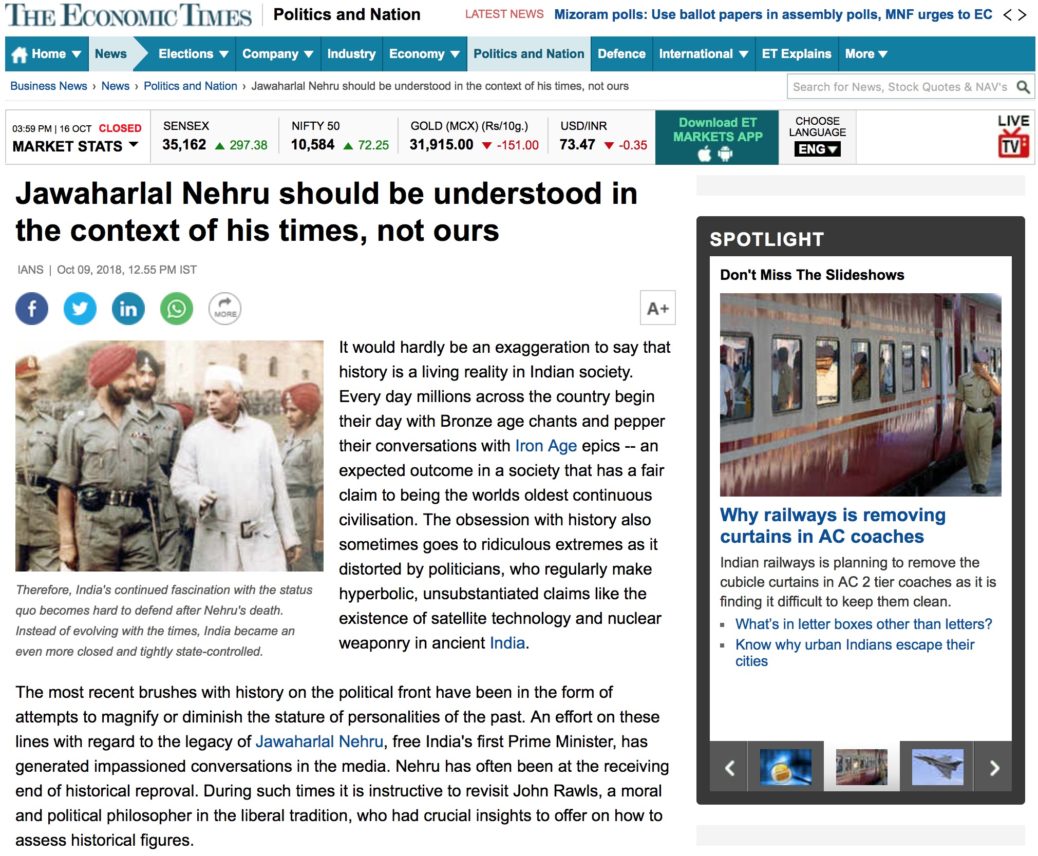 Jawaharlal Nehru should be understood in the context of his times, not ours

It would hardly be an exaggeration to say that history is a living reality in Indian society. Every day millions across the country begin their day with Bronze age chants and pepper their conversations with Iron Age epics — an expected outcome in a society that has a fair claim to being the worlds oldest continuous civilisation. The obsession with history also sometimes goes to ridiculous extremes as it distorted by politicians, who regularly make hyperbolic, unsubstantiated claims like the existence of satellite technology and nuclear weaponry in ancient India.

The most recent brushes with history on the political front have been in the form of attempts to magnify or diminish the stature of personalities of the past. An effort on these lines with regard to the legacy of Jawaharlal Nehru, free India’s first Prime Minister, has generated impassioned conversations in the media. Nehru has often been at the receiving end of historical reproval. During such times it is instructive to revisit John Rawls, a moral and political philosopher in the liberal tradition, who had crucial insights to offer on how to assess historical figures.

An important argument that Rawls makes is that the giants of the past should be understood in the context of their times rather than ours. The benefit of hindsight is usually an unfair vantage point to pass judgement on the actions made by people in the past. Nehru is an appropriate case in point. The stance he adopted on the economic front is often put under the scanner for the repercussions they had on the long run. After all, the infamous Hindu rate of growth at which India expanded until the 1980s had its origins in the planned economy that Nehru set up after independence.

But what is often overlooked is that the Nehruvian approach was by no means unique at the time. The idea that the state could plan to meet each and every demand and need of its citizen had quite a few takers in the post-War era, even if it might seem absurd today. In fact, Nehru had invited the best and brightest economists of the time to India for insights on the viability of a planned economy. I.G. Patel recalls in his memoir how a series of economists — Gunnar Myrdal, Ragnar Frisch, Jan Tinbergen, Oskar Lange and Richard Goodwin — came to India with a definite view that development could be plotted and planned till the last mile.

Even the business community in India favoured the idea of planning — at least in the first decade following independence. The economist John Kenneth Galbraith, who served as the US Ambassador to India under the Kennedy administration, once pointed out: “The Indian commitment to the semantics of socialism is at least as deep as ours to the semantics of free enterprise ? It is regularly averred by the government and, indeed, by nearly all articulate Indians. Even the most intransigent Indian capitalist may observe on occasion that he is really a socialist at heart.” Such inclinations are hard to fathom in the post-Soviet world.

The mistake of the Indian political class lay in persisting with the model even after its failures and inefficiencies became apparent. By the mid-1960s, the criticism of planned development was hard to miss. Gunnar Myrdal penned a telling account on the failures of development, “Asian Drama”, in which he remarked that “India’s promised social and economic revolution failed to materialise”.

The arguments of free marketeers led by Milton Friedman were also becoming dominant in the field of economics at the time. A few East Asian economies — mainly South Korea, Taiwan, Hong Kong and Singapore — began opening up their economies after becoming disillusioned with the central planning model. They adopted a unique approach of state-led capitalism with a substantial export-oriented focus. Over the next few decades these economies entered a sustained high-growth phase that popularly came to be known as “the East Asian miracle”.

Therefore, India’s continued fascination with the status quo becomes hard to defend after Nehru’s death. Instead of evolving with the times, India became an even more closed and tightly state-controlled.

The general failure to contextualise the economic legacy of Nehru has made him an unfair target of the history wars that are increasingly taking place in today’s political arena. There have been other victims of these debates as well. It is crucial that in these dialogues Rawls’ reasoning be followed and sweeping judgement with the benefit of hindsight be avoided. When history is distorted to be used for partisan battles, the people risk losing their touch with the past and with it a sense of commonality and belonging.