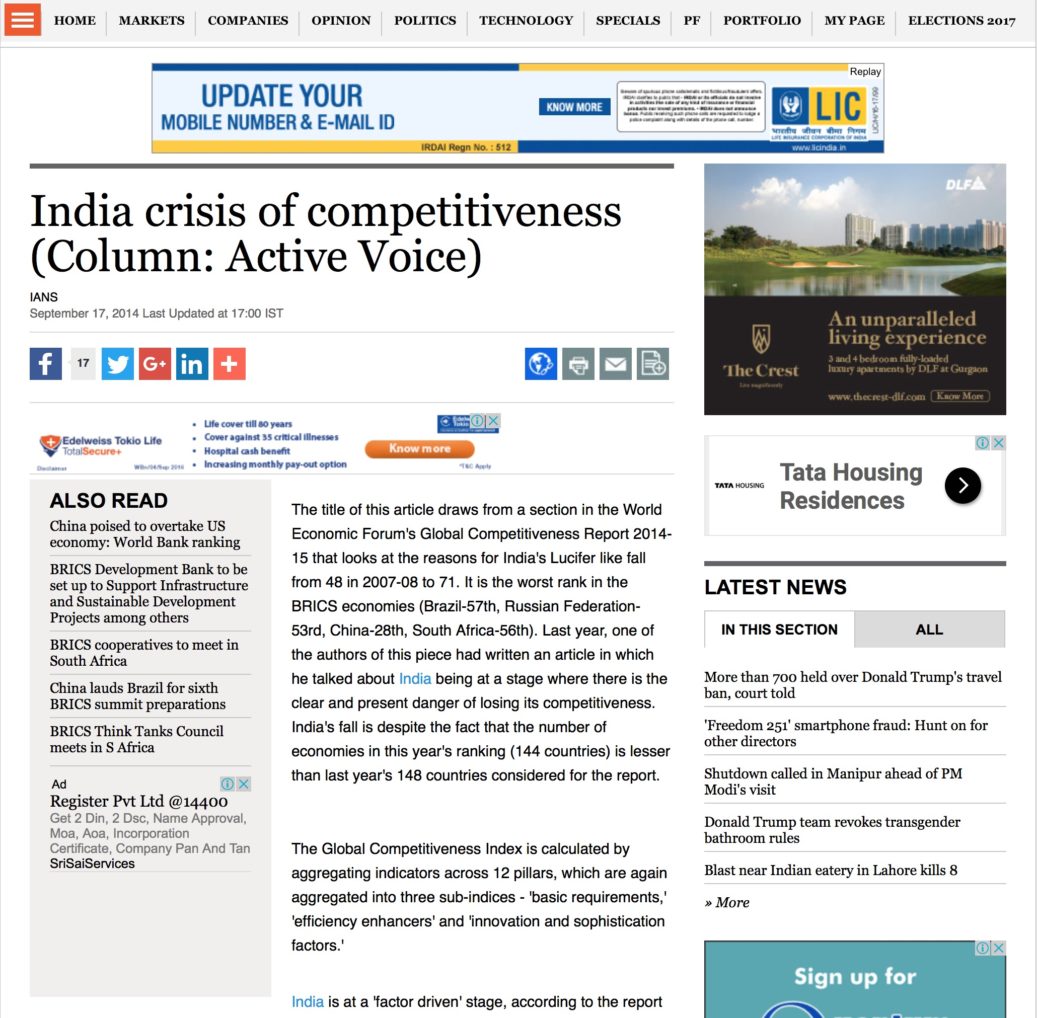 The title of this article draws from a section in the World Economic Forum’s Global Competitiveness Report 2014-15 that looks at the reasons for India’s Lucifer like fall from 48 in 2007-08 to 71. It is the worst rank in the BRICS economies (Brazil-57th, Russian Federation-53rd, China-28th, South Africa-56th). Last year, one of the authors of this piece had written an article in which he talked about India being at a stage where there is the clear and present danger of losing its competitiveness. India’s fall is despite the fact that the number of economies in this year’s ranking (144 countries) is lesser than last year’s 148 countries considered for the report.

The Global Competitiveness Index is calculated by aggregating indicators across 12 pillars, which are again aggregated into three sub-indices – ‘basic requirements,’ ‘efficiency enhancers’ and ‘innovation and sophistication factors.’

India is at a ‘factor driven’ stage, according to the report and should ideally focus on the ‘Basic Requirements’ sub-index to improve its competitiveness. However, this is the sub-index where India performs the worst with respect to its relative rank. India’s rank across this sub-index has mildly bettered to 92, up from 96 a year ago. India has done poorly across this sub-index due to its poor macroeconomic environment (rank 101) as well as a poor health and primary education infrastructure (98). Also, India’s decrepit infrastructure (87) is all too well known.

The report specifically cites the growth of India’s economy at a modest 4.4 percent in 2013 as one of the reasons for its overall fall in competitiveness. For the health and primary education pillar, infant mortality and childhood malnutrition in India are one of the highest in the world that are cited as the major reasons for the fall. Similarly, only 36 percent of India’s population, according to the report, has access to improved sanitation. This might be the reason Prime Minister Narendra Modi stressed on the need for sanitation for Indians in his Independence Day speech. Indians’ life expectancy in Asia is the second shortest after Myanmar. In education, India is on track to achieve universal education but with respect to quality there is a severe crisis at the primary level as pointed out by several rounds of ASER reports. These reasons may help to explain India’s fall in competitiveness across the ‘basic requirements’ pillar. With a focus on improving the investment climate and of investment in infrastructure, the direction the country will take is clear. However, what remains to be seen is the speed with which macro-economic stability is ensured, and infrastructure is improved.

The second sub-index is called ‘efficiency enhancers.’ This has six pillars. India has seen a fall in this sub-index from 42 in 2013-14 to 61 in 2014-15. It is one of sub-indices where the rank has almost fallen 20 positions. Barring the market size pillar, all others have seen a drastic fall. The biggest shocker is financial market development (down from 19 in 2013-14 to 51 in 2014-15) and technological readiness (down from 98 to 121). The reasons for these two are specifically not cited but mentioned is the fact that India has run deficits and has been in a difficult fiscal situation. India also has had strained public finances that could be explained with the help of a low tax base representing less that 10 percent of the GDP and fiscal profligacy in the past few years. With respect to technological readiness, India, despite its telecom miracle, is one of the least digitally connected countries in the world according to the report. This is because only 15 percent of Indians access the internet on a regular basis. Broadband internet, if present is a privilege of a select few. Similarly, the goods efficiency pillar is at 95, down from 85 a year ago. This is attributed to increasing protectionism, monopolies and various distortionary measures such as subsidies and administrative barriers. Also, informality of business is cited as a major reason for under-performance in this pillar. Similarly, the labour market still is rigid though there are some states, which have initiated work, most notably Rajasthan and Haryana, for simplifying laws and making it easier for business to operate.

This report is an addition to the growing literature that focuses on India’s under-performance in crucial areas of the economy, which has resulted in undermining its growth and competitiveness. The direction that the prime minister, his finance minister and the RBI governor seem to be taking shows a strategic intent to bring about structural changes with respect to the economy. Will this strategic intent be implemented? That remains to be seen.

Published in Business Standard on September 17, 2014