Process and likely focus areas of the Budget 2016 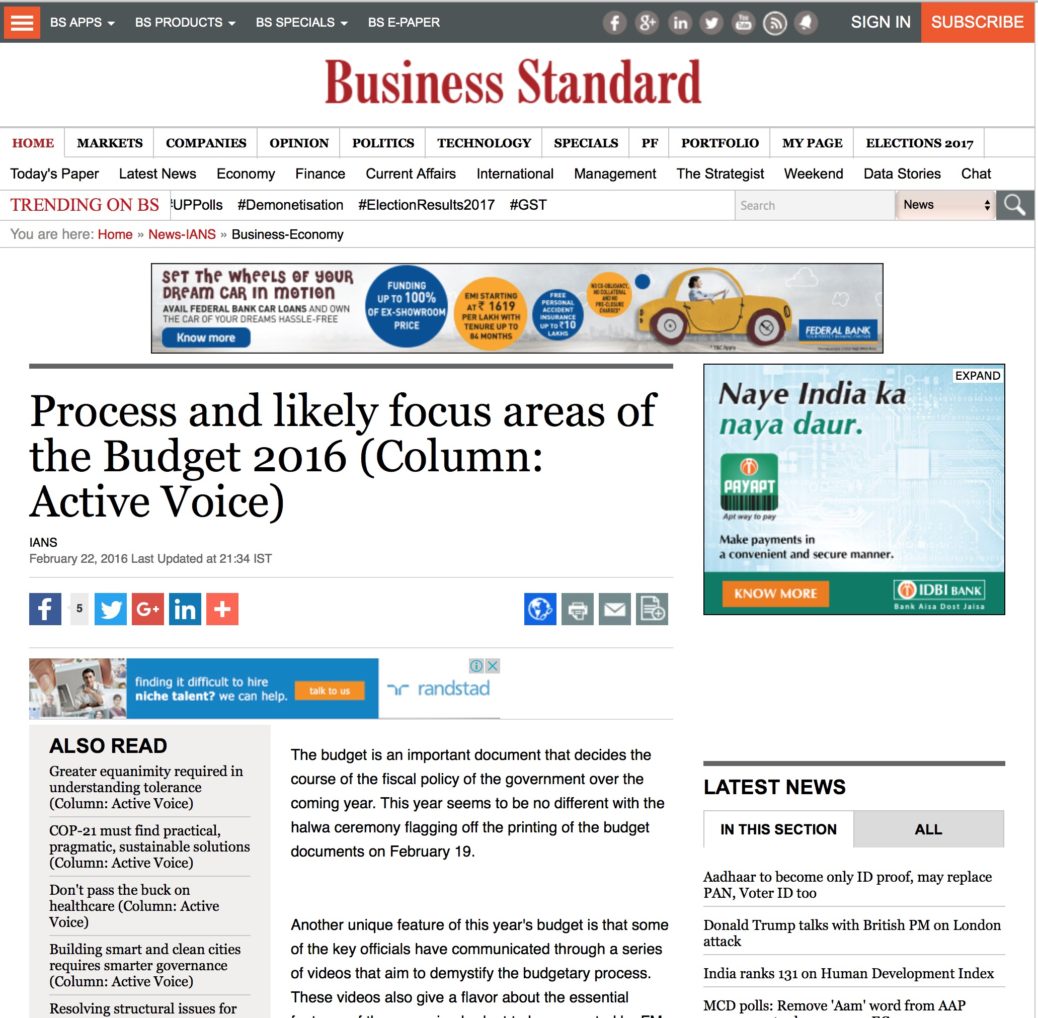 The budget is an important document that decides the course of the fiscal policy of the government over the coming year. This year seems to be no different with the halwa ceremony flagging off the printing of the budget documents on February 19.

Another unique feature of this year’s budget is that some of the key officials have communicated through a series of videos that aim to demystify the budgetary process. These videos also give a flavor about the essential features of the upcoming budget to be presented by FM Jaitley on February 29.

The key officials that have spoken before the budget announcement include the finance minister, the minister of state for finance, and the revenue and the economic affairs secretaries – and all have made some crucial points relating to the budget 2016.

The finance minister, in his interactions, had mentioned the use of technology to the advantage of all taxpayers. Already some 1.4 crore people have been notified of the budget refunds through the technology platforms and their refunds have been processed through the same medium. Roughly 90 percent of the budget filings are done online, and this is where the power of technology is making the tax process smooth and efficient.

The minister of state for finance, in his interaction, has mentioned that the budget will aim to reduce poverty, provide prosperity to farmers, help in job creation for the young people of the country and provide a better quality of life to all citizens. He also expressed his belief that India will continue to be a beacon of growth and stability in a very turbulent global environment

The economic affairs secretary tried to demystify the budget process and mentioned that it is a long-term process as opposed to the common conception. It generally starts in September with a detailed circular being issued to all the ministries. Post this, in November and December, the Department of Expenditure holds meetings with various ministries about the requirements in the current and the next years.

At the beginning of January, the Department of Revenue makes its forecasts for the current year and the next year. There are the revised estimates for the current year and the budget estimates for the next year. Post this once the revenue and expenditure proposals converge, the finance minister holds consultations with various stakeholders and proposals are concretized at the end of January. Decisions are then taken and post this followed by printing of budget documents.

The economic affairs secretary also alluded to the fiscal deficit and how the government is looking at it. He too was upbeat about India’s performance amid global turbulence and said that budget has to focus on growth as it leads to job creation and economic development.

On the indirect side, there are three major components: excise duties, customs and service tax. Normally these are roughly the same contribution, but this year, due to the oil duty, the excise duties are close to 39 percent while the other two form the remaining indirect taxes.

The service tax structure is diversified, which is a good thing. The direct side seems as having a shortfall of about Rs.40,000 crore as corporate earnings have been low but this will be compensated by the indirect side which is buoyant. The revenue secretary also alluded to ways and means to reduce the litigation that has been seen as a perennial problem for India’s corporate sector.

In the week ahead, a lot of haze will get cleared on the issues pertaining to the budget. The new media strategy seems to be a good initiative leading up to the budget. Overall the stage is set for a historic budget. It is also hoped that the government succeeds in the balancing act when Finance Minister Arun Jaitley presents the budget in the Lok Sabha at 11 a.m. on February 29.

Published with Business Standard on February 22, 2016.