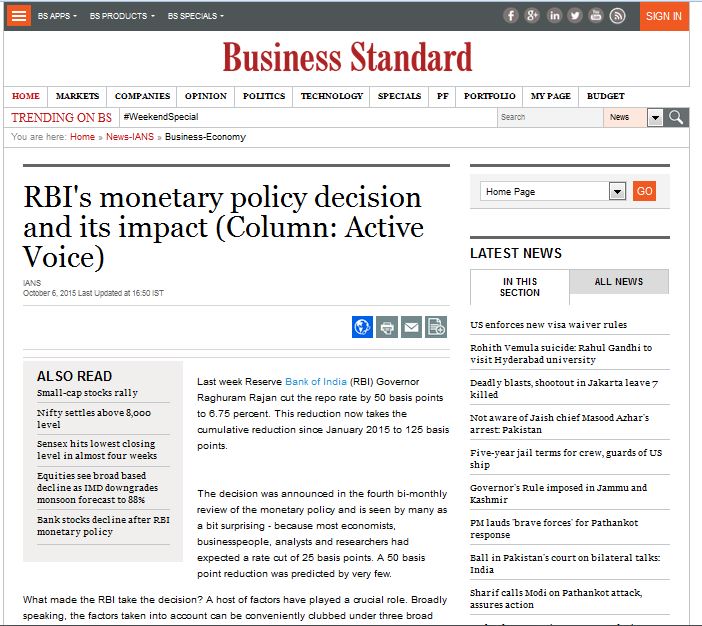 The decision was announced in the fourth bi-monthly review of the monetary policy and is seen by many as a bit surprising – because most economists, businesspeople, analysts and researchers had expected a rate cut of 25 basis points. A 50 basis point reduction was predicted by very few.

What made the RBI take the decision? A host of factors have played a crucial role. Broadly speaking, the factors taken into account can be conveniently clubbed under three broad heads: low inflation, domestic factors and global factors. While low inflation is a domestic factor, it has had played a very crucial role in the rate cut and is thus put under a different head.

First, CPI-based retail inflation in India continued to decline and in August was at a historic low of 3.66 percent. The WPI was seen too at historic lows and in the negative territory (-4.95 percent). Much of this has to do with global commodity glut leading to a price collapse in the international markets and adroit handling of food items by the government. The collapse had led India’s Chief Economic Advisor (CEA) to argue that India is closer to a deflation territory and thus the rationale for this rate cut falls in line with CEA’s observations. Also, RBI has reduced its inflation forecasts for January 2016 from the earlier six percent to 5.8 percent. In all likelihood, inflation will be below this level by January 2016. To spur growth and maintain price stability the RBI has gone ahead with the decision. One must also notice that Governor Rajan has been more than successful in taming India’s inflation from its historic double-digit peaks when he took over in September 2013 to bring it down to the present historic lows. However, as the policy statement makes it clear the long-range target is to bring inflation to a level of five percent by the end of fiscal 2016-17.

Second, the RBI has factored in the local domestic scenario of growth, liquidity, investments, monsoon expectations and production and service activities. With respect to growth, the RBI has stated ‘a tentative economic recovery is underway, but still far from robust’. The liquidity ‘eased considerably during August to mid-September’. Despite the 14 percent deficient monsoon, first advanced estimates suggest foodgrain production to be higher than the previous year. The manufacturing sector seems to be ‘exhibiting uneven growth’. The manufacturing PMI remains in ‘expansionary mode’ in August despite slowing down in comparison to July. Service activity remained subdued as gauged from sluggish demand for cement and inventory of unsold residential houses. However, in the months ahead the government could boost the construction by spending on public works. Broadly speaking RBI has given due consideration to all the domestic factors before taking the decision.

Third, the RBI’s decision also takes into account global factors. These include, among others, the decision of the Federal Reserve to defer policy rate tightening to most probably later this year. Had the Fed increased the rates earlier this month, India’s policy stance could very likely have not been as forthright as it has been at present. Also external factors like global commodity glut primarily due to sluggish Chinese demand have helped India meet its fiscal consolidation plans and helped ease inflationary trends. Another point that seems to have been looked at is the sluggish growth in Europe and recession-like conditions in emerging markets most notably in Brazil and Russia. China’s move from investment to consumption has seen the depreciation of the renminbi and some rough turmoil on the stock markets. All these international developments and their impact on India’s trading relationships have been factored into making the decision.

Thus, all in all, the decision seems prudent and well thought through. One may ask what impact is the rate cut expected to have. If proper transmission does happen, the rate cut is expected to provide a boost to investment and consumption while increasing the inflation to a comfortable level.

Going ahead, it is expected that the banks pass on the benefits to the business sector and retail consumers. Already some of them have announced the plans to transmit the rate cut forward. Overall it bodes well for the growth of the Indian economy but a careful eye must be kept on seeing how far do the rate cuts impact inflation.

Published with Business Standard on October 6, 2015.