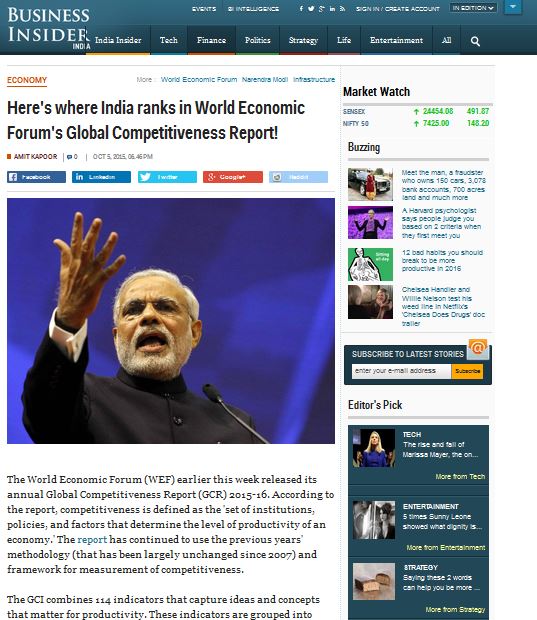 The World Economic Forum (WEF) earlier this week released its annual Global Competitiveness Report (GCR) 2015-16. According to the report, competitiveness is defined as the ‘set of institutions, policies, and factors that determine the level of productivity of an economy.’ The report has continued to use the previous years’ methodology (that has been largely unchanged since 2007) and framework for measurement of competitiveness.

The rankings on the global competitiveness Index showcase some interesting trends. This year’s Index ranks 140 economies. Switzerland retains the top rank followed by Singapore. The top ten slots are occupied by the same countries that were the top ten countries in 2014-15 GCR. Among the top ten only four countries are outside of Europe. These include Singapore (ranked 2nd), US (ranked 3rd), Japan (ranked 6th) and Hong Kong SAR (ranked 7th).

Among the BRIC’s, Brazil is down to 75th from the previous years rank of 57 largely due to its weak performance on the macroeconomic front as well as its ‘corruption scandals’. Russia is up eight places to 45 from 53 primarily due to change in estimates of GDP at PPP by IMF as well as improvements in ‘regulatory business environment and domestic competition’. India is up 16 places to 55 after five years of continual decline. The report attributes this to ‘the momentum initiated by the election of Narendra Modi, whose pro-business, pro-growth, and anti-corruption stance has improved the business community’s sentiment towards the government.’ The report also clearly indicates that ‘India remains one of the least digitally connected countries. Fewer that one in five Indians accesses the Internet on a regular basis.’ China’s rank remains unchanged at 28, and the report clearly states that it faces ‘rising production costs, an ageing population and diminishing returns on the massive capital investments of the past three decades.’ China’s strategy the report mentions must now focus on ‘productivity gains through innovation and demand through domestic consumption.’

Another crucial point that is mentioned in the report is that the total factor productivity (TFP) has grown by close to 1.4 percent in India in the decade 2005-14 as compared to the previous decade from 1995-2004. It is in stark contrast to what most other economies have witnessed in the same time frame. Almost all of the major economies have seen a decline in TFP barring China, which has seen a growth of close to 0.25 percent over the commensurate period.

Overall the report comes across, as having rich insights in areas countries should work on to improving their productivity and long-term prosperity. The policymakers are advised to take note and work towards improving their competitiveness in the years to come.

Published with Business Insider on October 5, 2015.