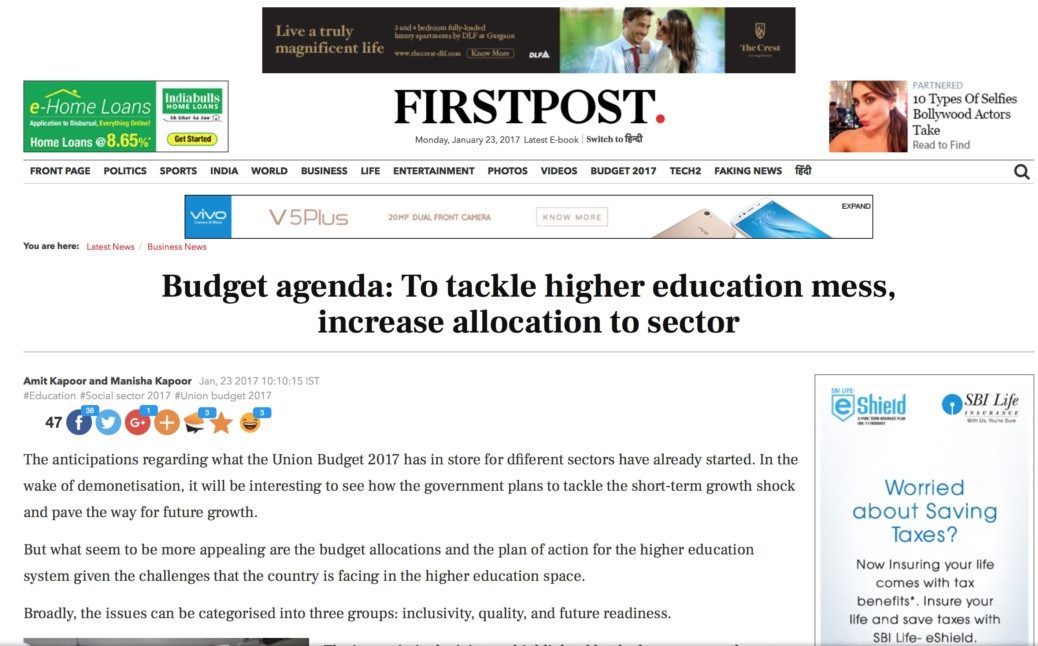 The anticipations regarding what the Union Budget 2017 has in store for different sectors have already started. In the wake of demonetisation, it will be interesting to see how the government plans to tackle the short-term growth shock and pave the way for future growth.

Broadly, the issues can be categorised into three groups: inclusivity, quality, and future readiness.

Second, the aspect of quality of education and curriculum is also put to the test by the low employability of students graduating out of universities. This denotes a gap between skills imparted by education institutes and skills required by the industry.

The third aspect relates to the use of technology platforms for increasing access to affordable education with low internet penetration; developing world-class institutions which are still a challenge. While the world is moving towards robotics, artificial intelligence and re-skilling their workforce, India doesn’t seem to take actual cognisance of this. These issues reflect the need for a radical transformation in higher education ecosystem.

However, there are certain key areas that can be touched upon by the budget this year for tackling the diverse issues being faced by the higher education system in India.

For one, emphasizing on private universities. The low enrolment ratios present in the country point out the demand-supply gap that private universities are helping to fill. They are playing a significant role by enrolling around 65 percent of the overall students enrolled in the higher education. But barring some most of them have turned into degree shops. The government can thus formulate requisite regulations focusing on quality-based learnings in private institutions that can help revamp the higher education system.

Second, devising measures to strengthen the interface between academic institutions and industries. The success of higher education ecosystem depends upon its capability to equip students with dynamic skills that helps them in evolving as a productive workforce. But the current curriculum does not equip students with employable skills.

According to the National Employability Report 2013, the level of employability of students is as low as 25%. This results either in investments in training programmes by the employers or in students ending up looking for some practical courses. The need is, therefore, to formulate a plan of action incentivising both the parties on this collaboration to ensure that skill building is in line with requirements of the industry.

Third, adoption of technology in imparting learning. The government has shown a keen interest in leveraging the benefits of technology in making learning processes easy and accessible to all. The Union Budget 2016 announced the setting up of a digital depository for degrees, academic awards, etc which has been put in place.

The National Academic Depository is aimed at facilitating the verifiable online certificates that will help students, academic institutions as well as the users such as employers. The government has also launched a MOOCs platform, SWAYAM that offers more than 2,000 free courses. Although, the foundation steps have been laid in this area, we still have a long way to go. It is important that MOOCs courses are provided accreditation so that students can reap the benefits of the same before entering the workforce.

Fourth, achieving global quality standards. According to QS World University Rankings (2015-16), India has only two universities in top 200, which points to the fact that Indian universities are lagging behind in global quality. Although, this is an area that was touched upon by the previous budget as well this year’s budget is expected to have further provisions for the same.

The government announced its plans to provide the regulatory architecture to ten public & private institutions to emerge as world-class teaching and research institutions in the budget last year. The guidelines for that have been formulated by UGC. Moving ahead the government should focus on R&D allocations so that universities can help in the further creation of knowledge.

This brings us to the final point, regarding budgetary allocations for the higher education system. The government expenditure on higher education has been incremental overtime fluctuating between 1 to 1.5% of GDP which is lower than several other countries. The need for modernising and transforming the educational architecture requires budgetary support from the government.

If some of these issues are tackled in this budget, it will help India transform into a knowledge economy.

The article was published with First Post on January 23, 2017.