Where does the Indian Middle Class lie?
A Need for a Definition 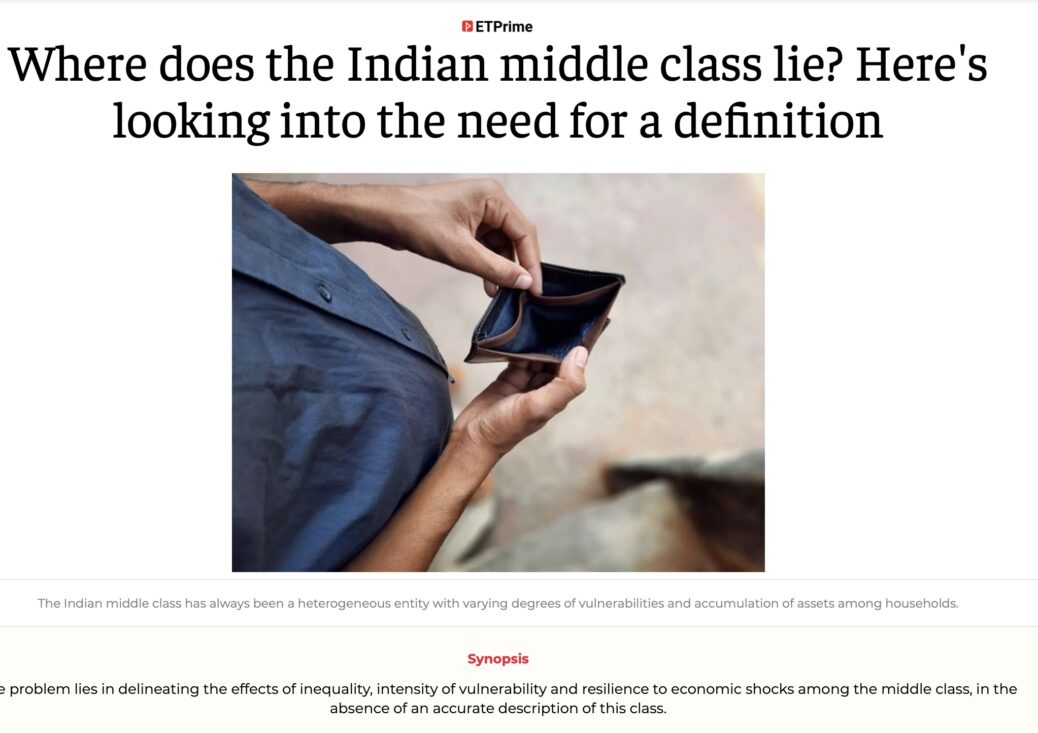 The problem lies in delineating the effects of inequality, intensity of vulnerability and resilience to economic shocks among the middle class, in the absence of an accurate description of this class.

The Indian Middle Class has occupied an exceptional place in the Idea of India. The ascendence of this middle class has been viewed with a rejuvenated sense of optimism, hoping that this reasonably large section of the population has the power to influence political change and dismantle corruption. This globalised new middle class of the 21st century was to be the reckoning force of change in the Indian public discourse as it was during the nationalist movements of the 20thcentury. At the same time, the middle class has been perceived with a sense of suspicion for being self-interested and reproducing their privileged position through generations. Thus, the duality of character within the middle class has further made it far more ambiguous to define and mark its contours. In this context, it is not only challenging to locate where the middle class lies, let alone draw a boundary to map its mobility.

The ever-expanding middle class is not immune to vulnerabilities, stagnation, and deprivations due to multidimensional inequalities. The last two years of the Covid-19 Pandemic have resulted in a downward movement into poverty for many households. One could also correlate the increasing dependence upon social protection schemes like MGNREGS as an indicator of heightened employment and income vulnerability (as per the data provided by the Ministry of Rural Development, 2020-21 saw a 10% jump in people registering for work through the scheme with an approximate 178% increase in households demanding employment). The problem, however, lies in delineating the effects of inequalities, the intensity of vulnerability and resilience to economic shocks among the middle class, in the absence of an accurate description of this class. Some cut-off based definitions are available to us for the ease of categorising the middle class, although they fall short of a true representation in line with the national poverty measures.

The Indian middle class has always been a heterogeneous entity with varying degrees of vulnerabilities and accumulation of assets among households. While the movement in and out of poverty could be traced by comparing the per capita expenditure to the poverty line, the movement within the middle class becomes a highly arduous task. The salience of middle class analysis to the Indian discourse lies in its political influence and in its representation of all kinds of experiences of inequality and poverty. A group as large as nearly 80% of the Indian population captures a significantly large lower middle class with low disposable income, a stagnant middle-middle class with extremely slow mobility and an upper middle class that is very close to the affluent upper class. The need for an official definition of the middle class, either in terms of assets or income accumulation, is essential to understand the trends of expansion within the sub-groups to highlight movement within the class as well as the descent to poverty. Second, the burgeoning middle class is not inversely related to economic distress. Therefore, an absolute definition can only help identify the triggering points of economic deprivations and their social manifestations. Third, a quantitative and qualitative understanding of the middle class is vital to studying their democratic participation and their contribution to the Indian political culture.

As with poverty, there can be no uniform or relative basis for understanding the middle class globally, but a nationally determined absolute definition correlated with multidimensional inhibitors to socio-economic mobility can lead to a more comprehensive analysis of structural factors that shapes various classes, influences its composition as well as political impacts of class behaviour.

The article was published with Economic Times on March 1, 2022.