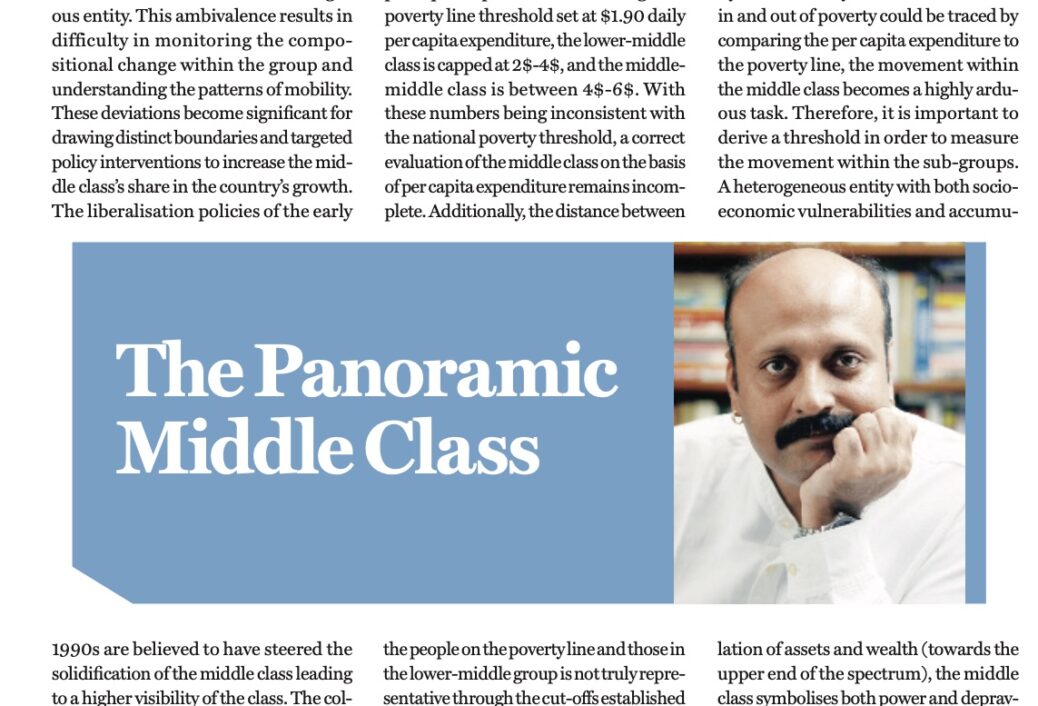 The Indian middle class has always occupied a space of intrigue about its composition and characteristics. Viewed with both potential for change and suspicion of vested interests, the middle class has remained an ambiguous entity. This ambivalence results in difficulty in monitoring the compositional change within the group and understanding the patterns of mobility. These deviations become significant for drawing distinct boundaries and targeted policy interventions to increase the middle class’s share in the country’s growth. The liberalisation policies of the early 1990s are believed to have steered the solidification of the middle class leading to a higher visibility of the class. The colloquial Aam Aadmi has been caricatured for their aspirations of a “comfortable life”. In popular media, an urban middle class household has been depicted as the primary beneficiary of the liberal reforms. The diverse discourse lands the middle class at the core of economic development, presented as the prototype of an economically healthy class with a high and dignified standard of living.

Previously, scholars and organisations have attempted to define the middle class to map their mobility between classes and within the sub-groups. A group as large as nearly 80% of the Indian population captures a significantly large lower middle class with low disposable income, a static middle-middle class with extremely slow mobility and an upper middle class close to the affluent upper class. Nobel laureates Abhijit Banerjee and Esther Duflo calculated the thresholds for the Indian middle class based on per capita expenditure. With the global poverty line threshold set at $1.90 daily per capita expenditure, the lower-middle class is capped at 2$-4$, and the middle-middle class is between 4$-6$. With these numbers being inconsistent with the national poverty threshold, a correct evaluation of the middle class on the basis of per capita expenditure remains incomplete. Additionally, the distance between the people on the poverty line and those in the lower-middle group is not truly representative through the cut-offs established by Banerjee and Duflo. NCAER has set a cut-off for the middle class between the household income of 2 Lakhs per annum to 10 Lakhs per annum. The closest we have of a governmental definition is the official categorisation of the Economically Weaker Section (EWS), which is based on both income and assets. A candidate is eligible for reservation under the EWS category if their household income is less than 8 Lakhs per annum. People with property of notified sizes are excluded from this definition.

However, extending EWS to defining the middle class is to see the latter through a narrow lens, further obscuring the fuzzy boundaries between the classes and the sub-groups. A definitional clarity over the middle class is pertinent for a comprehensive analysis of poverty and inequality in our country. While the movement in and out of poverty could be traced by comparing the per capita expenditure to the poverty line, the movement within the middle class becomes a highly arduous task. Therefore, it is important to derive a threshold in order to measure the movement within the sub-groups. A heterogeneous entity with both socio-economic vulnerabilities and accumulation of assets and wealth (towards the upper end of the spectrum), the middle class symbolises both power and depravity. The salience of this class in reinforcing discourses lies in its economic diversity and varying experiences of inequality and poverty. We argue for an absolute threshold for the middle class to analyse the triggering points of descent into poverty or downward mobility. At the same time, an absolute definition will help correlate income or asset-based indicators with multi-dimensional inhibitors of growth that generate inegalitarian structures and aid their sustenance.

The article was published with Business World.