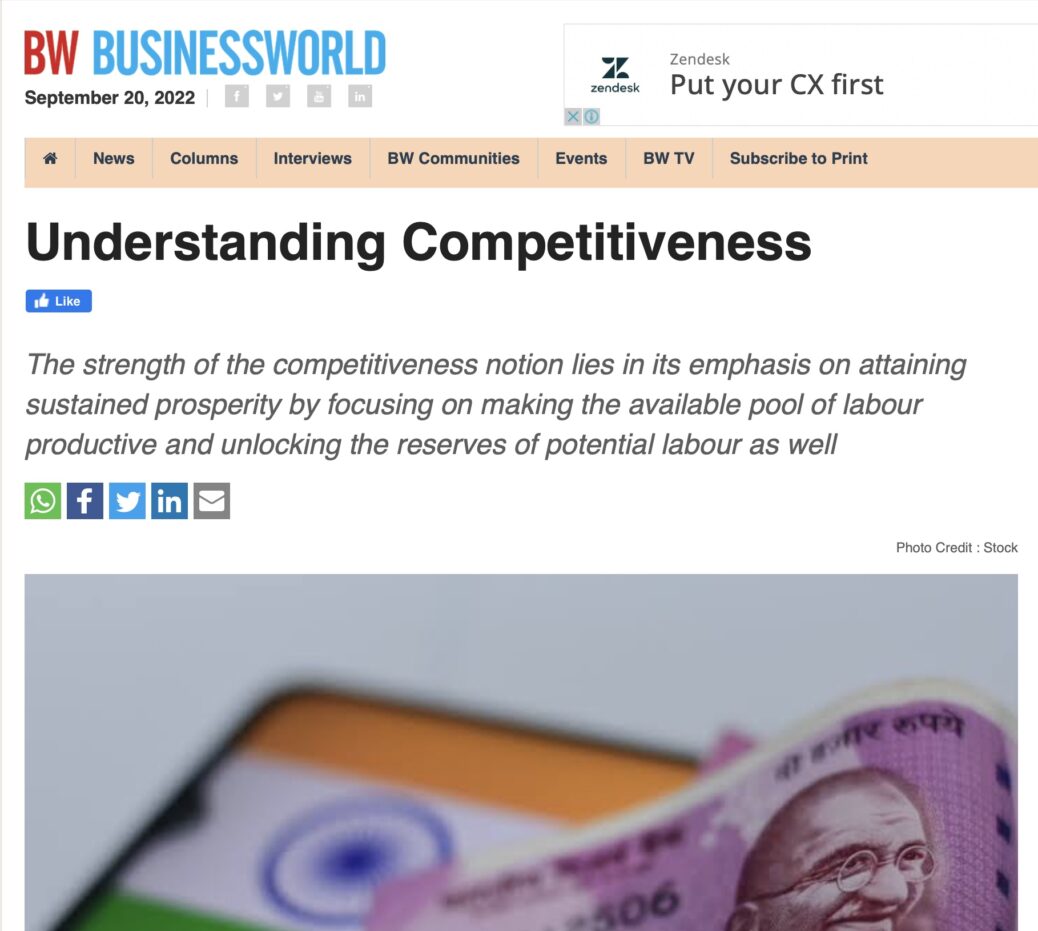 Transforming India to an economic powerhouse has been a subject of extensive discussion. With the country’s growing ambitions, what is needed is a new conceptualization of India’s ambitions and a renewed development approach. The Competitiveness approach serves as a promising approach to address India’s challenges and help achieve the aspired transformation. The term competitiveness comes to be associated with a range of factors – higher market share, a competitive exchange rate, exports, greater FDI inflows, higher exports, etc.  Before delving into the nuances of the approach, it is essential to make a clear demarcation between what competitiveness is and what it is not.

One of the parameters that gets more frequently associated with the term competitiveness is export success. The two are often used synonymously even though the difference between them is significant. There is sufficient evidence pointing to the lack of a direct causal relationship between exports and overall economic growth. A sole focus on an export-led growth strategy puts export-oriented sectors at the centre stage. While they are the engine of the economy, without an equal focus on local industries and other aspects of the economy, the value generated through exports will not translate into a higher standard of living for the broader population. As opposed to a narrow focus on exports, competitiveness strategies are broadly based, emphasizing the need to enhance performance across the entire economy, not just the export-oriented sectors. A focus on export success should be a part of the broader competitiveness and growth strategy. The focus, thus, should be on the actual policies that can increase competitiveness rather than just exports.

No single parameter captures the depth of the competitiveness concept. Competitiveness, as envisaged by Michael Porter – the world’s foremost thinker in the field of Strategy and Management, puts across a comprehensive notion of the term by defining it in terms of productivity. The approach holds productivity to be the key driver of sustained prosperity. A region becomes competitive if it is able to provide a context that allows firms to be productive, and individuals to partake in the value being generated through their productivity. This is the only means of sustaining prosperity. Productivity should be understood more broadly in terms of value creation. In simple economic terms, productivity is perceived as output per input, emphasizing input efficiency. The connotation of productivity that underpins the competitiveness framework does not just focus on utilizing less inputs to produce more, but on the value of what is produced. Value creation is essentially about catering to the needs of the different sections of society, be it consumers or the producers themselves. If a country is producing more of a good with less inputs but without the good having much value for the society, sustaining prosperity becomes a bigger challenge.

Identifying enablers as well as barriers to productivity is a location-specific process. Assessing a region based on its own strengths and weaknesses is a prerequisite to understand its drivers of competitiveness. A more disaggregated competitiveness assessment would present a granular picture for nuanced policy insights to sustain prosperity. The assessment can be taken to smaller geographies, right down to a firm level, to understand how to make firms more competitive. It is not what a location competes in that determines prosperity, but how productively it competes by using the available human, capital, and natural endowments. In this process, firms play a major role in creating prosperity. The choices made at a firm level go on to shape the nation’s productivity. Various choices made by the firm including the sector it chooses to compete in, its business model, efficiency in the production process, and value-addition, are factors affecting the overall productivity level of the nation. It is important to enable companies to extract better returns for their services or products, move beyond a reliance on cheap labour to models of operation based on innovation.

Labour productivity – represented by changes in GDP per employee – is one of the two vital drivers of prosperity. India has registered a positive development on the labour productivity front. The second driver of prosperity growth is labour mobilization which continues to pose a substantial challenge for India. The demographic dividend would offer the nation its highest working age ratio between 2021 and 2041. The strength of the competitiveness notion lies in its emphasis on attaining sustained prosperity by focusing on making the available pool of labour productive and unlocking the reserves of potential labour as well.

Adding to the robustness of the competitiveness concept is its equal focus on both macroeconomic and microeconomic aspects of a nation. The two aspects are fundamentals of competitiveness, and play different yet complementary roles in the economy. Macroeconomic aspects accounts for the broad social and political institutions, fiscal and monetary measures, while microeconomic foundations look at factors directly impacting individual companies and the labour force. A blend of the two aspects offers a comprehensive view of the economy. A comprehensive view does not imply making progress on multiple policy fronts simultaneously. The true meaning is to build an overall agenda with priority actions for creating a more distinctive and competitive position for a country based on a thorough assessment of the Indian competitiveness diagnostics. Elevating India’s status from a lower-middle income country to a high-income economy in the long-run should be based on new guiding principles, new priority policies, and a new implementation model. This is all the more important considering that India’s economic course has a crucial influence on not just the Indian society but also the world at large as it has emerged as a promising geo-political player.

The article was published with Business World on August 31, 2022.