The Need for Innovation in Management 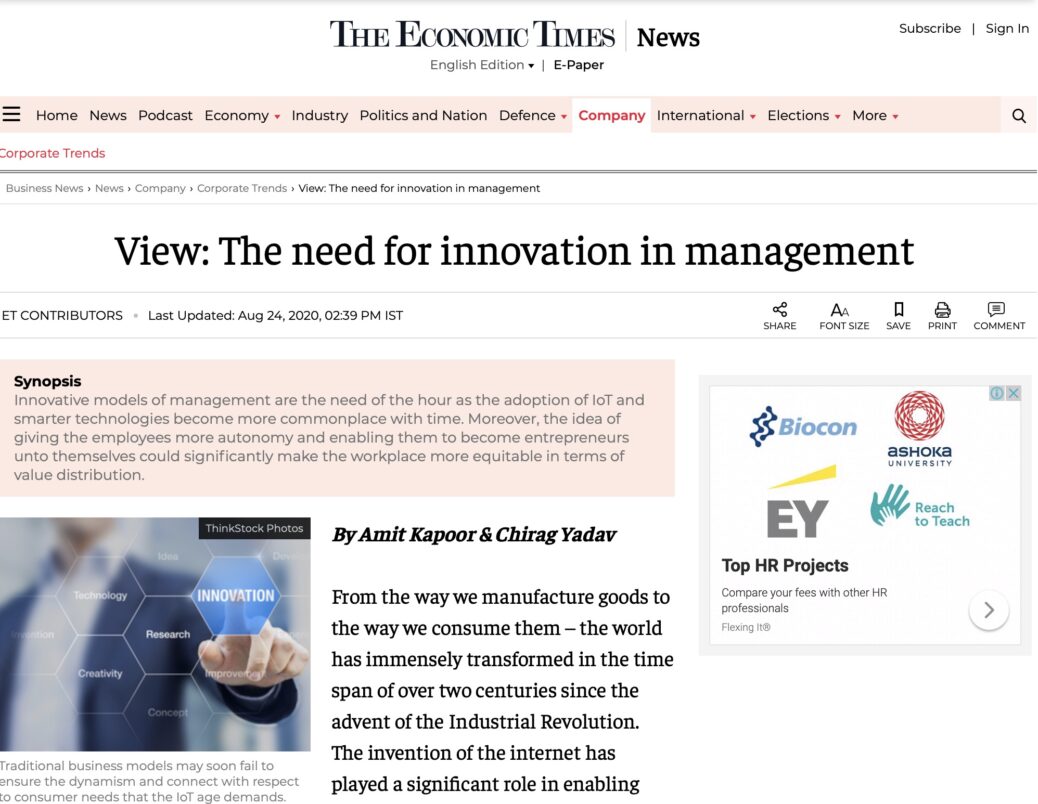 Rearranging the Workplace: The Need for Innovation in Management

From the way we manufacture goods to the way we consume them – the world has immensely transformed in the time span of over two centuries since the advent of the Industrial Revolution. The invention of the internet has played a significant role in enabling this change. The mechanisation of the James Watt era and the assembly line of the Henry Ford era have given way to user-specific product customisation in the age of internet of things. However, the management models of businesses have hardly kept pace with the rapid transformations in manufacturing and service delivery.

Since the industrial revolution, business models have been centred around mass production in high-efficiency factory lines with branding at the core of it all. If a company becomes a well-known brand, it is able to make inroads into global markets and set its own prices and command higher profit margins. The theoretical principles originate from Adam Smith’s Wealth of Nations in which he outlined the ingenuity of division of labour.

Smith’s theory of production was supplemented with the work of Frederick Taylor on scientific management. He meticulously estimated how long it should take men to perform given tasks. His work lay the foundation for Ford’s assembly line. Another prominent influence in the management literature has been that of Alfred Chandler. He studied three major industrial countries between 1870 and 1938 – the US, Germany, and the UK – and concluded that the greatest competitive advantage these economies had was the number of multinationals they housed. He believed that the development of companies was based on two elements: strategy and organisational structure, and that the latter must adapt to the former. His ideas are still influencing management in companies today.

These ideas of the industrial age replaced the low-efficiency workshops with high-efficiency production lines. Many companies still use the production line model. But as the internet age takes over the baton, the ideas of the previous era do not perfectly hold for the modern interconnected world. The most significant difference between the internet age and the industrial age lies in the business model that has evolved from mass production to bi-lateral and multi-lateral markets, and from being driven by branding to centering around platforms.

The markets in the internet age are vastly different from the traditional ones as the latter typically had a high threshold for entrance for businesses. Several products failed to make it to the market since they did not have name recognition and did not have large sales volumes. The internet has pulled down these barriers as any seller can place their products on e-commerce platforms and gain market access. Market interactions have further evolved with the onset of internet of things (IoT).  With IoT, businesses are able to sense the needs of the users and deliver the right products almost instantaneously. Instead of the homogeneity of mass-produced goods, user-specific customisation has become possible with IoT. Thus, the core of business models today is to develop lifelong users of products based on the unique understanding of their needs.

The ability of businesses to develop a base of lifelong users is dependent on continuously meeting their needs. This calls for a drastic shift in the way businesses are managed as well. Traditional business models will fail to ensure the dynamism and connect with respect to consumer needs that the IoT age demands. Every age has a unique business paradigm and paradigms from different time are incompatible with each other.

An ingenious business model paradigm for the IoT is Rendanheyi model of management proposed by Zhang Ruimin, CEO and Chairman of Haier Group. The word Rendanheyi itself captures the crux of the approach where “Ren” refers to the employees; “Dan” refers to the user value; and “Heyi” means combining the user value realization with created user value. The basic idea is that the distance between the employee and the user should be reduced to zero so that they can directly interact with each other and create value without the bureaucratic involvement of the top management. The employee compensation also arises out of user evaluation and paid for by the users instead of evaluation by superiors and paid for by the enterprise. The ultimate goal of the Rendanheyi model is to enable entrepreneurs to face users directly, create value with them, and cultivate them into lifelong users.

The mechanism, thus, aligns the interests of the employee and the user as both parties engage in maximising value. The model also eliminates the traditional bureaucratic set-up where all decisions arise out of the top. Instead, the employees face the users directly and respond in a timely fashion.

To further facilitate autonomy, the Rendanheyi model has also developed a new organisational format called ecosystem micro-communities (EMCs), which groups employees into small self-managing teams. There are two types of EMCs: solution-oriented and experience-oriented. Experience-oriented EMCs work in the markets directly to reach user communities through a network of touchpoints, trying to understand and incorporate needs for enhanced user experience. Solution-oriented EMCs are focused on implementation, creating and iterating solutions to satisfy user experience needs. These two kinds of EMCs work together to achieve synergy and also to keep each other in check. Driven by value creation and sharing, EMCs become self-driven, self-optimizing, and self-reinforcing.

Such innovative models of management are the call for the day as the adoption of internet of things and smarter technologies become more commonplace with time. Moreover, the idea of giving the employees more autonomy and enabling them to become entrepreneurs unto themselves could significantly make the workplace more equitable in terms of value distribution.

The article was published with Economic Times on August 24, 2020.