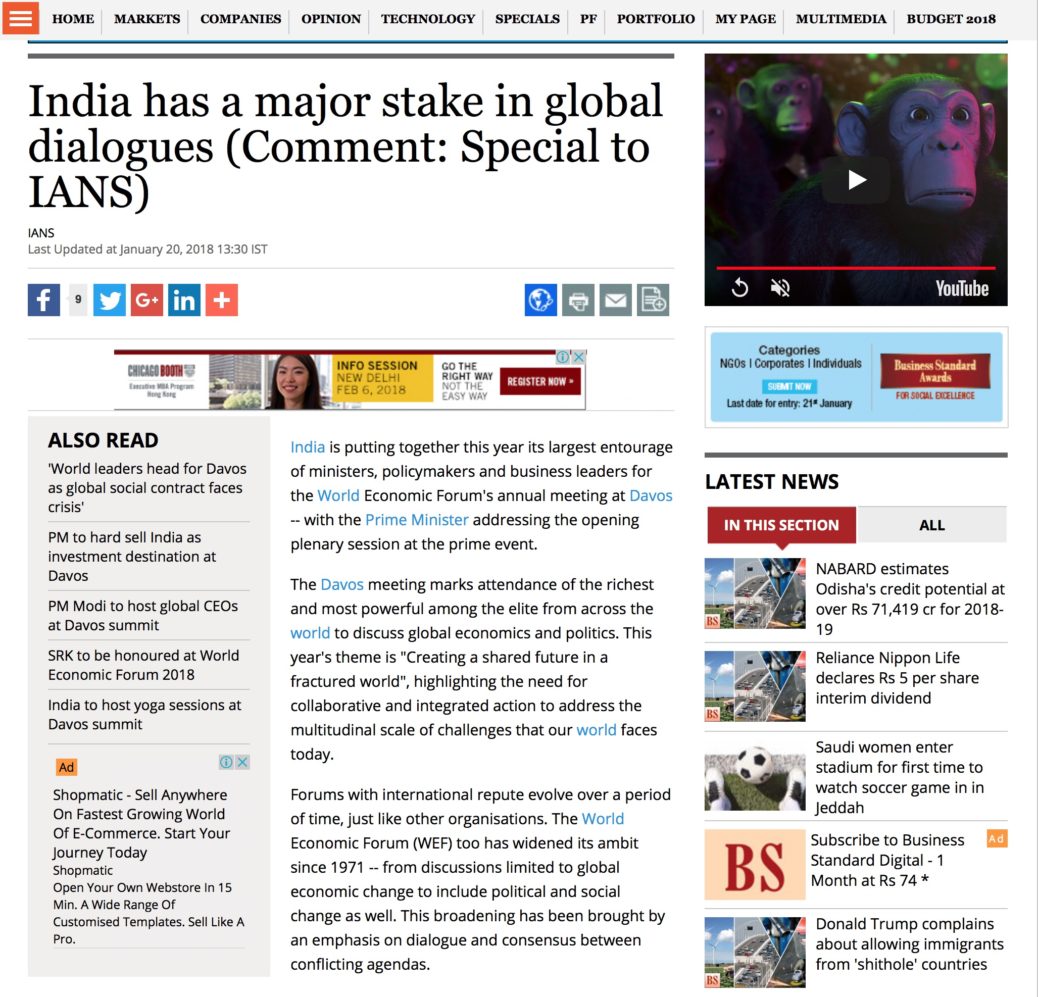 India this year is putting together its largest ever entourage of ministers, policymakers and business leaders along with the PM addressing the opening plenary session of the World Economic Forum’s annual meeting at Davos. The Davos meeting marks attendance of the richest and powerful elites across the world to discuss global economics and politics. This year’s theme is “creating a shared future in a fractured world” highlighting the need for collaborative and integrated action to address the multitudinal scale of challenges that our world faces today.

Forums having international repute present different incarnations over a period since their inception just like other organizations. If we talk about the World Economic Forum (WEF) clearly the ambit since 1971 has widened its focus from discussions about global economic change to include political and social change as well. The broadening of the agenda has been brought by an emphasis on dialogue and consensus between conflicting agendas.

Growing unification with the world economy has helped India establish itself as an emerging market economy to a considerable extent. With elite economic powers now recognizing India’s presence worldwide in major sectors, it is useful to understand the stature of our participation in forums at the global level in view of erratic global developments that have become a common spectacle today.

It is after a gap of 20 years that an Indian PM will be attending WEF’s annual meeting (last attended by former PM H D Deve Gowda in 1997). With recent economic reforms at the background; Goods & Services Tax (GST) and Demonetization as the front-runners, PM Modi is expected to echo his vision of a new and transformed India by 2022 at this global stage while taking on issues relating to economic imbalances, terrorism, and cyber threats. He is being the chief marketing person of India’s narrative towards national and foreign policies, entrusted with the responsibility of making sure that the message is received. The accompanying ministers, businessmen, and civil society leaders too would be elaborating on the efforts made in the last three and a half years in several sessions. This move comes at a time when there’s optimism surrounding the Indian sentiment towards economic growth and social advancement. International forums (like the WEF) can help provide for the field day to our state heads, policymakers, and business leaders to come out and market India’s presence globally. The insightful interactions with top-notch world leaders at these forums makes room for some of the best learnings and showcasing one’s own experiences to foster greater connectivity and cordial relations.

With our country becoming the fastest growing nation in the world, it is decisive to aim more such forums of international distinction to promote India as an ideal destination for investment and time as these platforms because of their high concentration of global influencers provide for a great pitch. While targeting global forums, India can lay out its position in today’s world order; represent the willingness to take the lead and send out a categorical message across the global community regarding the creation of a conducive environment for doing business and emerge as a potential partner in steering global economic growth. Reflecting upon this view, our government is preparing for the commemorative Indo-ASEAN (Association of Southeast Asian Nations) summit to be led by PM Modi in Delhi between 25th-26th January 2018. The summit will see the participation of all 10 ASEAN countries. This can prove to be an opportunistic situation for our country to present itself as a powerful confederate to these countries in areas of strategic regional connectivity and target global positioning as well.

As on the lines of WEF, there are some other forums (both international and national) that facilitate a platform for exchanging ideas and work towards more comprehensive solutions to plausible problems. The Asian Financial Forum (AFF) to which India decided to give a miss for its 11thedition at Hong Kong from 15th-16th January 2018 is one amongst such organizations. The AFF features world’s most powerful business and financial players to discuss ideas and the developments in dynamic Asian markets. It is not to say that non-participation at the AFF this year reflects India’s weak stance on intensifying its global presence as the reasons for non-participation are not clear.

If we look at the ramifications of such global and national forums, one can assert that these conversations and dialogues help in moving one step forward towards higher integration of thoughts and experiences. There are several other platforms even at the national level like India’s National Competitiveness Forum aiming to drive India’s productivity, competitiveness and leadership in global markets through its activities, Thinkers Sandbox which is a thought leadership platform to name a few. Forums like these can help our country commandeer a resilient narrative both nationally and internationally.

The average Indian here would think and say, “What’s the point in all this?” He may have never heard of a place like Davos and is very likely to think that it is nothing but a scheme by the world’s most powerful elites. As a matter of fact, there may not be big boost decisions affecting his routine life activities from such dialogs. Sill in a place where global tensions arise with a blink of an eye, it is solace that there are global neutral platforms where discussions will not turn unpleasant.

The article was published with Business Standard and Gulf Today on January 20, 2018.