Is the Stock Market Overvalued 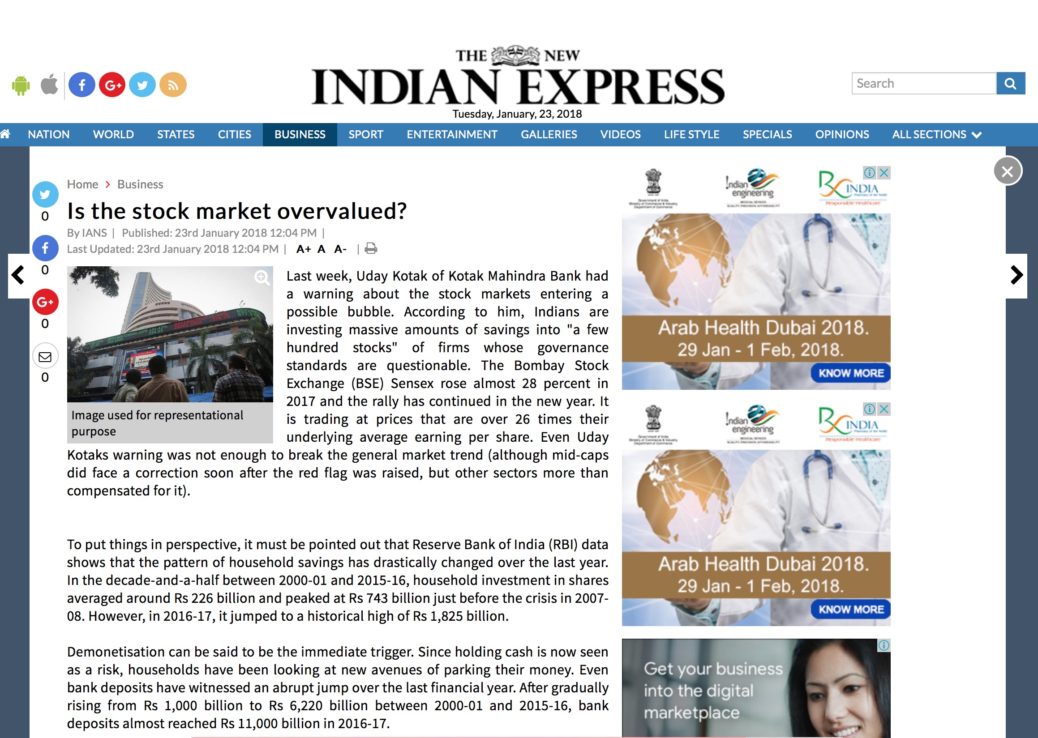 Last week Uday Kotak of the Kotak Mahindra Bank had a warning for the stock markets entering a possible bubble. According to him, Indians are investing massive amounts of savings into “a few hundred stocks” of firms whose governance standards are questionable. The Bombay Stock Exchange Sensex has risen almost 28 percent in 2017 and the rally has continued in the new year. It is trading at prices that are over 26 times their underlying average earning per share. Even Uday Kotak’s warning was not enough to break the general market trend (although mid-caps did face a correction soon after the red flag was raised, but other sectors more than compensated for it).

To put things in perspective, it must be pointed out that RBI data shows that the pattern of household savings has drastically changed over the last year. In the decade and a half between 2000-01 and 2015-16, household investment in shares averaged around Rs 226 billion and peaked at Rs 743 billion just before the crisis in 2007-08. However, in 2016-17, it jumped to a historical high of Rs 1825 billion. Demonetisation can be said to be the immediate trigger. Since holding cash is now seen as a risk, households have been looking at new avenues of parking their money. Even bank deposits have witnessed an abrupt jump over the last financial year. After gradually rising from Rs 1000 billion to Rs 6220 billion between 2000-01 and 2015-16, bank deposits almost reached Rs 11,000 billion in 2016-17.

So, the bottom line is that the average Indian saver is getting more and more invested into the stock market and so any significant downturns will have far-reaching implications. Therefore, Uday Kotak’s warnings need serious consideration and even more so because there are multiple global factors that can put an end to the bull markets.

First, the global economy began witnessing its first signs of recovery last year after the 2008 financial crisis. As a response to the crisis central banks all over the world had began a policy of quantitative easing that pumped excess liquidity into global markets. The gains from this policy are debatable but the money found its way into financial assets and bloated their prices. Therefore, despite a lack of positive economic news and unexpected political changes throughout the world, equity markets continued to show an upward trend.

However, as economies continue to show signs of revival the quantitative easing policies will slowly come to an end and excess liquidity will be rolled back by central banks. The US Federal Reserve is already doing so, and other major economies will soon follow suit. This money will be withdrawn from the global equity markets which will, therefore, face an inevitable correction.

Second, the flip side of a change in liquidity is the interest rate level. In pursuit of the policy of quantitative easing, central banks in the advanced economies have reduced interest rates to rock bottom levels with Japan even going into sub-zero levels. However, as the liquidity taps are closed, interest rates will be raised to pre-crisis levels. If there are no recessionary signals this year, the US might raise interest rates three times to about 2 percent. This will be another strong reason for money to flow out of global equity markets into the safer havens of US bonds. Such trends will not be good news for investors in the Indian stock market.

Third, there are fears that the American dollar might become weak as China has indicated an inclination towards curtailing its purchases of US government bonds. Since China is the single biggest foreign holder of US debt, a slowdown in its purchases would imply higher bond yields and a weaker dollar. This would result in a flight of capital to safety out of world markets, including that of India.

Finally, the crude oil prices are expected to be high this year with the unrest in the Middle East. Prices are already above $60 a barrel and will continue its upward trend as the oil cartel tightens the market supply and US output of shale oil slows. Since oil prices are the leading drivers of inflation in the world and especially in India, interest rates will also have to be risen commensurately. These two factors, inflation and rising interest rates, are highly inimical to company earnings and, hence, will have a significant negative impact on the markets.

There are numerous global factors that are poised to bring an end to the bull run in the stock markets and considering the fact that historically high levels of household savings have been invested in it, a forewarning is due so that investors are not caught unawares and overexposed. It is better to form bear market plans now when investors have ample time and a clear head.

The article was published with The New Indian Express, Yahoo News & Maharashtra Today on January 23, 2018.