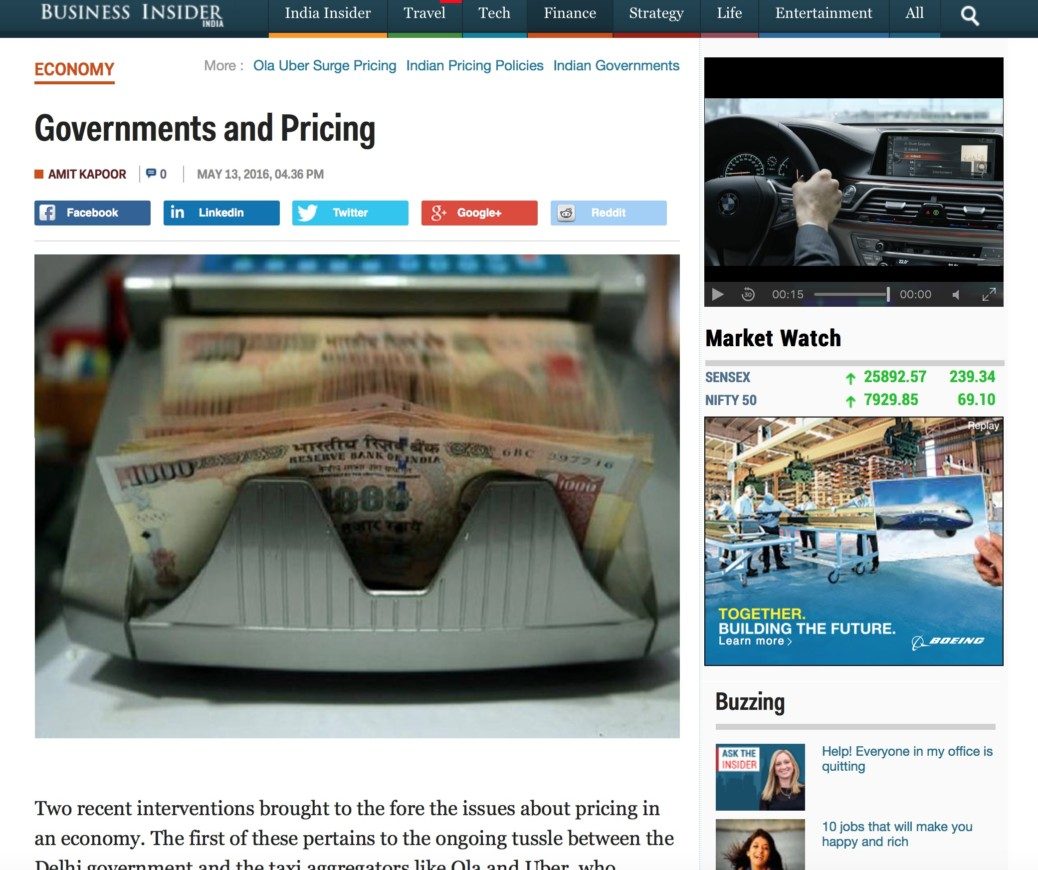 Two recent interventions brought to the fore the issues about pricing in an economy. The first of these pertains to the ongoing tussle between the Delhi government and the taxi aggregators like Ola and Uber, who engage in surge pricing. The second issue concerns to the Lok Sabha speech of the Minster of Civil Aviation Ashok Gajapati Raju while engaging in a debate on Demand for Grants for the Ministries of Civil Aviation and Tourism, which was approved by the House later. The issue there was guidelines to fix the prices to Rs. 2500 for an hour long flight or less as operators were seen charging way beyond the normal prices at certain times like during the Chennai Floods and Jat agitation. A pertinent question that arises is what is the role of the government if such a situation arises. Should it intervene to set right the prices?

Ideally, the government is best left out of the procedure of deciding prices. It is because it is not in the best position to determine the prices for goods and services as it has limited knowledge of these. However, there is a case for intervention where the balance (between consumer interest and producer interest) is shifting in favour of producers, and they are using their power to charge exorbitant prices. In such a case the prices become exploitative and ideally some independent regulators, (if any) of the sectors should intervene to set right the prices. They can also issue guidelines to the operators for adjusting prices or limiting prices accordingly.

The two issues need a closer scrutiny. In the case of taxi aggregators, like Ola and Uber the practice of surge pricing takes place once demand exceeds supply in a location. In such a scenario the surge pricing incentivizes the cab drivers to be on the road during this shortfall. A pertinent question to ask the regulators or even the government is at what level does the surge becomes exorbitant? Is it in principle unfair or is the price which is getting charged, i.e., 2X, 3X or even at 1.00001X (where X represents the normal price of the journey) unfair. The question is not just about prices but about fairness in a system. What is the fair price to charge to a consumer? Ideally, this is between a producer (taxi aggregator) and customer to decide but when exorbitant and exploitative prices are getting charged, which are beyond what is mandated by norms and guidelines, etc., there is a case for intervention. But then too the case is fairly weak for governments to intervene. At best regulators should intervene keeping the interest of consumers and producers in mind.

The second issue of reduction of prices to 2500 Rs. for trips, which take less than an hour to complete, is laudable. However, making it mandatory could be detrimental. If the government works to reduce the cost structures, it could very easily enable masses to undertake air travel. The cost reduction is part of the draft civil aviation policy as well. However, this is pursued best through economic liberalization in the civil aviation industry. The government should also look at the industry dynamics at play here. The airline sector as it is very competitive in India. At present, a host of regulations and the nature of industry have an impact on industry have a bearing on industry profitability. These include airport charges mandated by the regulator of the sector AERA (Airports Economic Regulatory Authority) to operate in India. Another factor having a bearing on cost structure and profitability is the price of Aviation Turbine Fuel (ATF). Other factors include intense competition in the sector and fulfilling operators’ public service obligations which include flying to remote and often nonprofitable areas. Only now as ATF prices are down, have the airline companies become profitable. Also, there are regulations like 5/20 rule which mandate an airline to operate in India for five years and have a fleet of 20 airlines before it can fly in international route stifle entry of newer players. All these have a bearing on the industry structure and pricing of airline tickets. At present the prices don’t seem to be supernormal however bringing them down by liberalization will help in the cause of making air travel accessible to people.

One sees that pricing is an important area not only from the viewpoint of companies and industries but also from the viewpoint of consumer interest. It is where there is a provision and case for independent regulators in a free market system whose role is to ensure that market participants behave. The regulators should bring in the semblance of balance in the system by looking at the priorities of various groups and coming to conclusions pertaining to prices etc., accordingly in case of the situations, which mandates intervention. Over the next few years, issues such as these will be in the limelight. The role of regulators is critical in ascertaining that markets function not only according to the free market system but also ensuring that there is balance and fairness in how market participants behave.