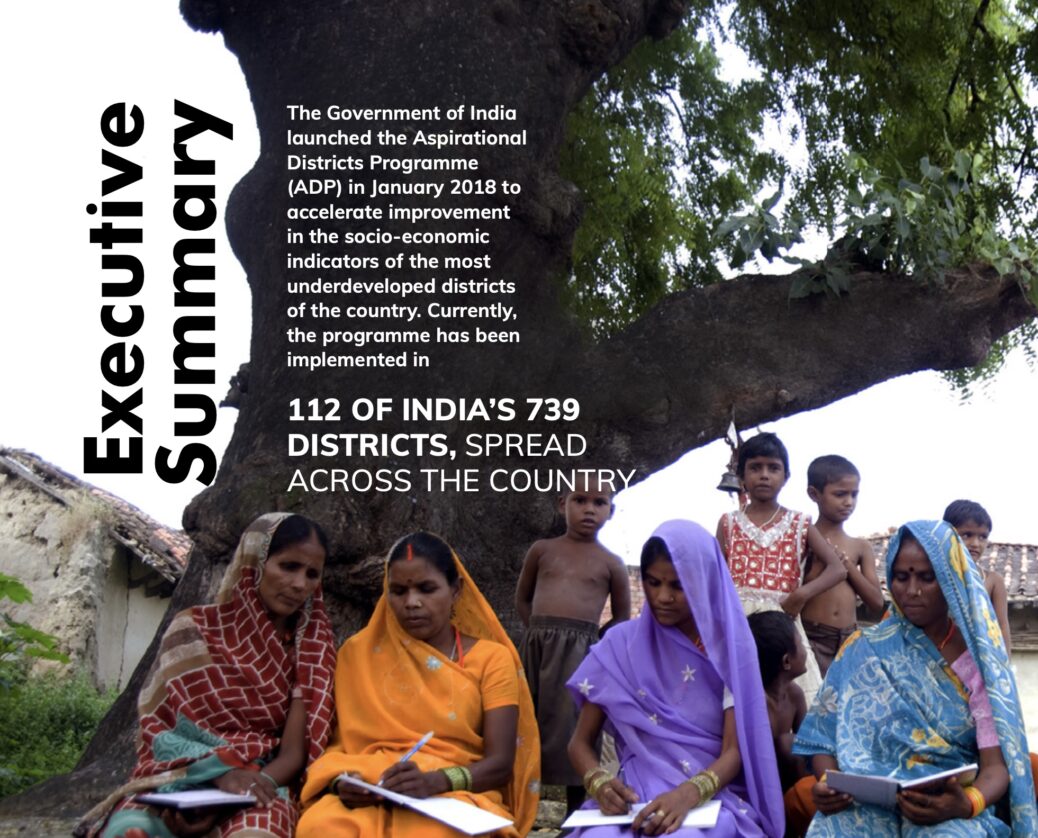 The Government of India launched the Aspirational Districts Programme (ADP) in January 2018 to accelerate improvement in the socio-economic indicators of the most underdeveloped districts in the country. Currently, the programme has been implemented in 112 of India’s 739 districts, spread across the country.

The ADP is a collective effort. At the Central level, NITI Aayog is anchoring the program and individual Ministries have assumed responsibilities to drive the progress of the districts. Yet it is the state governments that are the main drivers of change. Each state has formed a committee under their respective Chief Secretaries to implement as well as track the programme. Moreover, for each district, a central Prabhari Officer of the rank of Additional Secretary/Joint Secretary has been appointed to provide feedback and recommendations based on their local level findings.

The research in this study documents the social development outcomes in some of the most challenging regions of India. It examines institutional best practices, coordination frameworks across government bodies and other partners, and governance and leadership initiatives at the district level which can be used to replicate the success of this initiative not only in other districts of India, but also in other countries facing similar socio-economic challenges.

We find that there are several ways by which the project contributes towards enhancing the social progress of the region.

ADP covers 5 sectors: Health & Nutrition, Education, Agriculture & Water Resources, Financial Inclusion & Skill Development, and Basic Infrastructure. Within each sector, there are indicators and the targets are set for each of these indicators. We observe significant sectoral disparities across the TAPD programme in progress towards these targets (see Figure 1):

The disparities can be also be seen by looking at a particular district. The figure below depicts the performance of Dohad across sectors. It has overachieved its target in Health and Nutrition and lags behind its targets by significant margins in Agriculture and Water Resources, Skill Development and Financial Inclusion. These results suggest that there are no clear achievers or laggards across sectors.

Three key areas of best practice have emerged from the TAPD programme:

This study also sheds light on the economic benefits that the country can derive by addressing the social challenges. In health and nutrition, for example, the economic impact of reducing Severe Acute Malnutrition (SAM) among children is felt through the effects on productivity and lifetime learning. The overall economic impact for all the states (only looking at Aspirational Districts) of reducing SAM is estimated to be a mammoth 1.43 Lakh Crores. Similarly, the impact of providing household latrines is around 400 crores INR. These economic benefits can provide a strong rationale for the government in investing in programmes directed towards social benefits.

There is significant diversity among the districts covered by ADP. The indicators of the programme also range from inputs through to outcomes. This suggests two opportunities to enhance data collection and analysis: