Correlation between Urbanisation and Economic Development 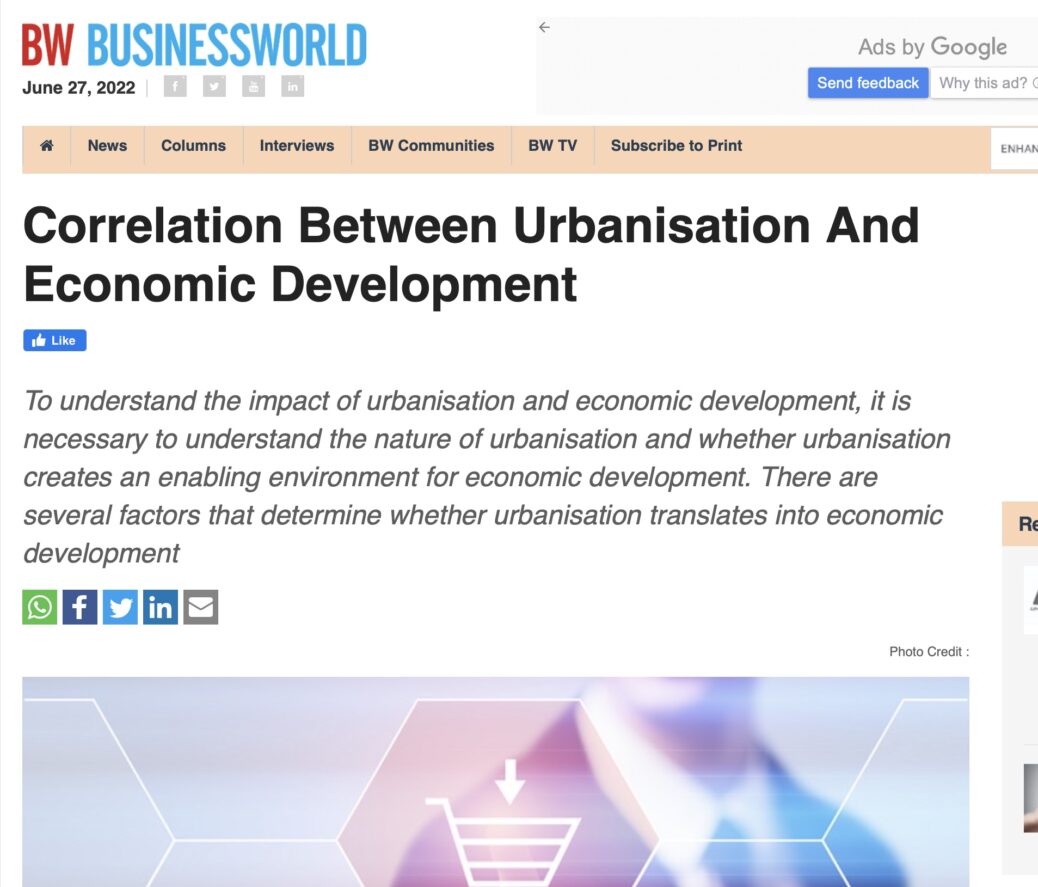 The World Bank estimates that about 4.2 billion people, or 55% of the world’s population, live in the cities. By 2050, this number will rise to 70%. Urbanisation is often seen as inevitable when a country transforms from a ‘traditional society’ to one which is geared toward ‘high mass consumption. These familiar terms are the first and last ‘stages of economic growth’ propounded by Walt Whitman Rostow.

Often, Urbanisation is also correlated with economic development. The proof of the pudding is in the eating. Already, 80% of global GDP is generated in cities. There exists a positive correlation between the higher GDP per capita income and urban population (as a % of the total population). Level of the urban population in countries like Switzerland (73.92%), Norway (82.97), US (82.66), Denmark (88.12), Sweden (87.98), Australia (86.24) & Canada (81.56) is significantly high. Conversely, countries with lower levels of GDP per capita have lower levels of urban population. Burundi (13.1% urban population), South Sudan (20.20), Afghanistan (26.03), Rwanda (17.43), Ethiopia (21.70), Kenya (28) and Myanmar (31) are some examples. Let us look at the case of India. MoSPI, in 2019 had estimated urban and rural per capita income in terms of Net Value Added (NVA) to be Rs 98,435 in urban areas and Rs 40,925, respectively. It is more than double in urban areas. One would, thus, assume that urbanisation is perfectly correlated with  economic development. Since correlation doesn’t mean causation, the relationship between urbanisation and economic development is also complex. For instance, while Somalia ranks second last in terms of per capita income, the level of urbanisation in Somalia is higher than in India.

Truly urbanised cities trace their emergence only in twentieth century. The advent of industrialisation in Europe and North America coincided with sudden rise of urban population towards the end of nineteenth century. Unfortunately, industrialisation was not always a precursor to rising in urban population to other parts of the world. One should quote Paul Bairoch’s seminal work ‘Cities and Economic Development’. He found “at a comparable stage of urbanisation in developed nations (i.e., from 1860 to 1870), the gap between the percentage of industrial jobs in the cities and the level of urbanisation had been only 50%, in the Third World in 1950 it was 130%. And despite the accelerated industrialisation occurring in the Third World beginning in 1948—1955, the gap remained at just about the same level”. This could be attributed to either high levels of unemployment in urban areas or higher levels of employment in tertiary sector. In many cases, it is both, including in India.

In many countries, colonialism led to development of urban agglomerations. The pre-colonial towns in these countries were either destroyed or co-opted. Since colonies acted as a source of raw materials for industries of colonisers, urban agglomerations were built around ports and colonial capitals. Though the urban transition has happened in many low- and middle-income countries, it has not delivered same levels of economic prosperity as was the case in Europe. This, in turn, has contributed to the proliferation of slums in urban areas across the ‘global south’. Regardless, empirical evidence suggests that more urbanised developing countries have lower levels of poverty as compared to their peers with lower levels of urbanisation.

Conversely, Michael Lipton, author of ‘Why Poor Stay Poor’, would attribute the higher level of poverty to inherent urban bias. Lipton says Urban Bias “exists unambiguously whenever an outcome, for example, an endowment of schools or a set of prices, persistently favours urban people vis-a-vis rural and thereby harms both efficiency (static and dynamic) and income distribution (especially in ways that deepen poverty)”.According to this theory, urban bias leads to migration towards urban areas and propels economic development in urban areas, thus limiting avenues for economic development in rural areas. But this should be taken with a pinch of salt. There is a bias toward remaining rural in India as there are several incentives attached with being classified as ‘rural’.

(2) Reclassifying villages and towns into cities/urban areas done for administrative and political purposes doesn’t necessarily translate into economic growth. Thus, the definition of urban and urbanisation becomes crucial. We will be delving into it in our next column.

(3) Economic growth is also a function of an increase in productivity. Urbanisation leads to the division of labour and economies of scale, which in turn gives rise to productivity. The economies of scale can be both for firms and the government. Economies of scale allow the government to invest in public infrastructure. Further, there is also complementarity between the cities and skill development. However, these economies can turn into diseconomies if the state does not invest in providing necessities like sanitation, affordable housing, drinking water, public health and basic infrastructure. Thus, the state should act toward addressing such diseconomies if they want to reap the benefits of economic development associated with urbanisation.

The article was published with Business World on May 13, 2022.