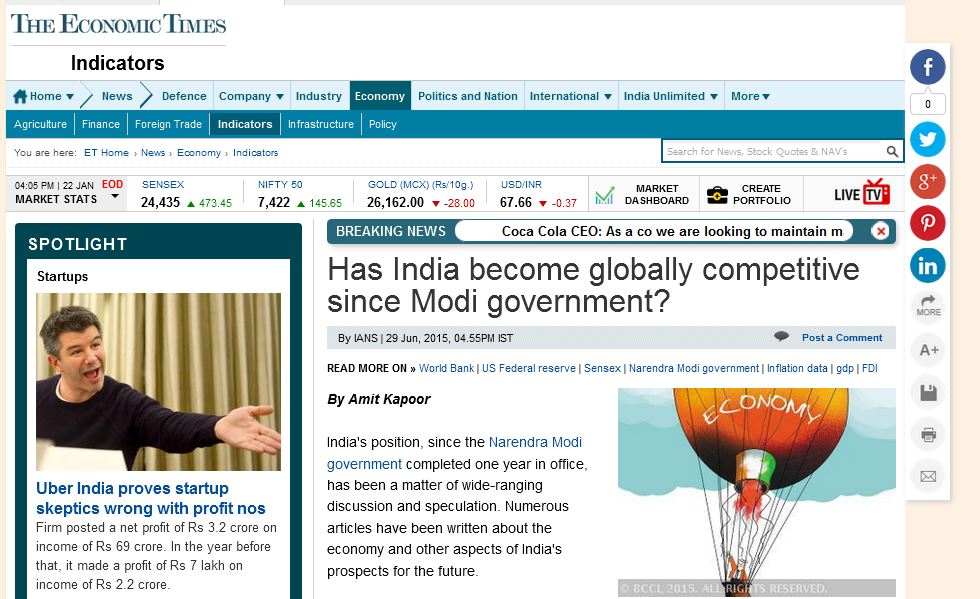 India’s position, since the Narendra Modi government completed one year in office, has been a matter of wide-ranging discussion and speculation. Numerous articles have been written about the economy and other aspects of India’s prospects for the future.

A pertinent question to ask in the economic sphere is how does India fare in its overall competitiveness in comparison with other countries?

One approach to answering this question could be in looking at composite indices like the Global Competitiveness Index in which India fares a poor 71st of the 144 countries considered in 2014-15. However, the problem, with this approach is that it is static in time for one year during which many significant things happen in an economy.

The approach here for assessing India’s competitiveness would be to use a conceptual model and look at some recent data and key developments that have taken place in the past year. It helps in making a dynamic reflection of India’s competitiveness at present. For making an assessment of India’s competitiveness, it is pertinent to look at a four-part matrix that consists of external and internal conditions along one dimension of the matrix while hard facts and policy are put along the other dimension of the axis. Along the four quadrants of this performance matrix, it is easy to look at the overall efforts and outcomes of the government/s and the private sector in making India competitive.

Along the internal conditions hard facts quadrant, one witnesses an improvement in the inflation data as well as the old GDP data. India’s Consumer Price Inflation subdued to 5.01 percent (provisional) in May 2015 against 8.33 percent in May 2014. The RBI has taken cognizance of this development and has adjusted key rates accordingly.

An improvement of roughly one percentage point is also observed if one looks at the GDP data from the old series.

Sector-specific data on power also shows that a capacity addition of roughly 22,000 MW in a year – the largest in a year in India’s history.

Data on Index of Industrial Production shows that for April 2014 to March 2015 there was growth of 2.8 percent over a contraction of -0.1 percent for the same period in the previous year. Thus, quite a lot has been achieved in this sphere.

Along the internal conditions policy quadrant, there are three distinct things one observes.

First, there is a growing recognition of making states as partners in the development process. Similarly, there is a growing recognition of understanding that states need to cooperate as well as compete to make India more competitive. The power to attract investments for states also depends on competitive tax rates that are a bit higher at present at the union level.

Second, the urban program (Smart Cities, AMRUT, housing for all) will hopefully empower city leadership to become more autonomous and independent in deciding the destinies of cities and their residents. Hopefully, it will also lead to better environmentally and economically viable cities of the future.

Third, within the railways sector that connects India, the recently released Bibek Debroy committee report is a step in the right direction for modernization.

Along the external conditions hard facts quadrant, four points are worth mentioning.

First, trade growth has seen a precipitous decline. Particularly shocking is the way in which both exports and imports have contracted over the past six months from December 2014 onwards. Experts believe this is due to the falling demand in the international region, particularly Europe, the U.S. and China. Imports have fallen in value terms particularly due to a commodity price collapse of crude oil.

Second, despite the export performance, FDI inflows in India remain robust. According to UNCTAD’s World Investment Report 2015, India is 9th overall in attracting FDI inflows. India’s FDI inflows jumped 22 percent to reach $34 billion in 2014. China remains the top destination with approximately four times our inflows at $129 billion. India also regained the top slot in remittances with overseas Indians sending back a staggering $70 billion in 2014, according to World Bank estimates.

Third, there has been a surge in the capital markets since Modi took over and the BSE Sensex has increased from roughly 24,700 points in May 2014 to near the 27,500 points mark at present.

Finally, the rupee has depreciated from 59 to a dollar in May 2014 to roughly 63 at present. This is despite the tightening of the monetary policy stance by the US Federal Reserve.

The first, is India’s increasing foreign engagement where it remains a beneficiary of official bilateral aid and pledges of investment as well as a donor – as in the recent case of Nepal. The economic diplomacy space here has considerably expanded.

Second, the reform process has to be pursued more aggressively and quickly. It can be done by opening up sectors of the economy and also looking Central Public Sector Enterprises in a strategic manner. More reform is certainly needed in sectors like grain storage and coal that are dominated by government monopoly, and this need not be opening up the sector for foreign players.

Third, Foreign Policy magazine’s Baseline Profitability Index points to India being the top destination for investment in 2015. It goes on to show that investor perception remains good about India.

It is thus visible that India is not extremely competitive at present but is bettering its economic prospects. The reforms process would aid in making India more competitive. India needs to improve its competitiveness by making it easier to start, operate and wind down a business operation in India. Also to compete infrastructure, tax rates and skills need to be bettered and much will be dependent on India’s execution capability.