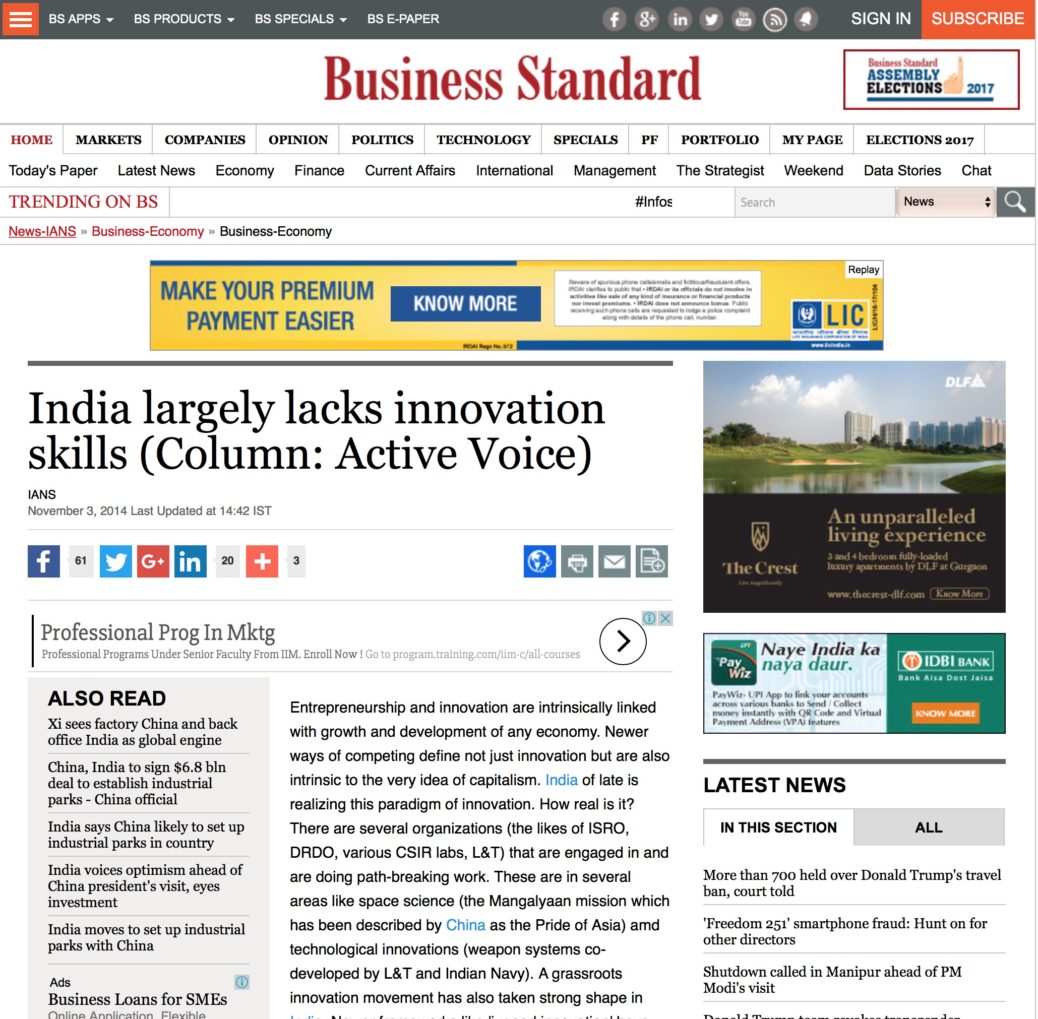 Entrepreneurship and innovation are intrinsically linked with growth and development of any economy. Newer ways of competing define not just innovation but are also intrinsic to the very idea of capitalism. India of late is realizing this paradigm of innovation. How real is it? There are several organizations (the likes of ISRO, DRDO, various CSIR labs, L&T) that are engaged in and are doing path-breaking work. These are in several areas like space science (the Mangalyaan mission which has been described by China as the Pride of Asia) amd technological innovations (weapon systems co-developed by L&T and Indian Navy). A grassroots innovation movement has also taken strong shape in India. Newer frameworks like ‘jugaad innovation’ have become buzzwords. There is also a paradigm of ‘Reverse Innovation’ in which companies are innovating in India or a developing world context and once the innovation has taken proper shape, introducing it to the developed market.

However, if one looks at the broader picture at the level of the country, we find that India’s performance is still poor if not outright dismal with respect to innovation. India still lags behind many smaller nations when it comes to entrepreneurship and innovation. We say this because of two fundamental reasons.

First, if one looks carefully at the numbers and global indices on innovation, one sees a totally different reality.  India ranks 76th on the global innovation Index 2014 among the 143 economies considered. The index is co-published by Johnson Graduate School of Management at Cornell University, INSEAD and World Intellectual Property Organization (WIPO). Similarly, with respect to IPR, India is placed last (at 25th position) by an index developed by the Global Intellectual Property Center of the US Chamber of Commerce. It points to the need for stronger IPR policy and more importantly enforcement and implementation. It will also bring in investments from countries that India desperately needs for building infrastructure and also for leveraging its demographic dividend.

Second, because of a weaker IPR regime and a host of other factors like access to venture capital, the general belief-set of the population, the downside risks of failure and the like, entrepreneurship is mostly at a nascent stage in India. While there is a constant din about entrepreneurship in business schools and the media, the rates of formal firm creation are dismally low. The numbers simply don’t add up to the hype. If one looks at the entrepreneurship data from the World Bank group, one finds that in India, on an average, we create roughly 200 times less number of firms per 1,000 working-age individuals as compared to Hong Kong. It may be due to India’s colossal workforce. But that argument also seems weak. Equally dismal are the total number of formal firm creations (limited liability firms) in India. In fact, from 2004 to 2012 the total formal firm creation in the whole of India (512,425) was lesser that Hong Kong (9,67,745). The problem also to a great extent to us appears to lie in the procedures and general awareness about formal firm creation in India. The proposal of setting up of an entrepreneurship fund of Rs. 10,000 crore by the finance minister in his maiden budget was a step in the right direction. However, it is equally pertinent to study the factors leading to low rates of entrepreneurship in detail before making allocations to boost entrepreneurship and small enterprise creation in the economy.

Despite the numbers, we have overt advertisements in TV channels taking about India’s ‘innovative’ universities, ‘innovative’ consumer durable companies and even ‘innovative’ sanitation hardware makers. One can only wonder if this is what innovation truly is. In our opinion, organizations in India have to overcome this systemic mindset of ‘branding’ themselves as innovative enterprises and try to look at the fundamentals of what innovation truly is. This will to a very great extent help them make progress with respect to truly being innovative without necessarily the need for branding.

One must look up to the likes of Schumpeter, Drucker or even most recently Christensen and Von Hippel if one wants to understand the innovation paradigm and what it truly means for organizations (both big and small) and how it has the potential to be a game-changer for any economy. A culture of innovation and entrepreneurship can not only provide better jobs, but also improve the quality of jobs and truly help India in realizing its demographic dividend.

If India wants to move ahead and boost its competitiveness, it will have to create incentives for entrepreneurship to flourish and a culture of innovation rooted in thinking rather than superficial branding. This will start with creating awareness and removing the entry barriers to both doing and more importantly creating new business.

Published with Business Standard on November 3, 2014.