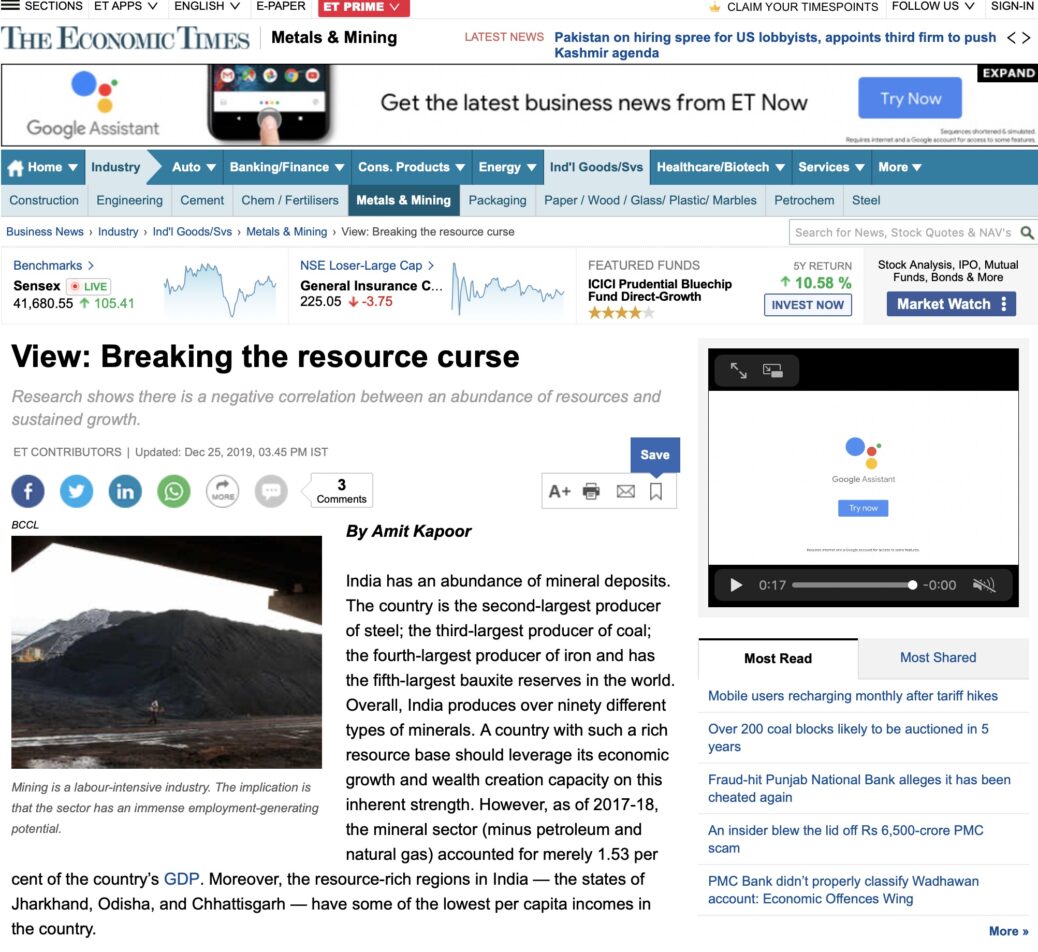 India has an abundance of mineral deposits. The country is the second-largest producer of steel; the third-largest producer of coal; the fourth-largest producer of iron and has the fifth-largest bauxite reserves in the world. Overall, India produces over ninety different types of minerals. A country with such a rich resource base should leverage its economic growth and wealth creation capacity on this inherent strength. However, as of 2017-18, the mineral sector (minus petroleum and natural gas) accounted for merely 1.53 percent of the country’s GDP. Moreover, the resource-rich regions in India – the states of Jharkhand, Odisha, and Chhattisgarh – have some of the lowest per capita incomes in the country.

These statistics are an extension of the so-called “natural resource curse” – the counter-intuitive phenomenon where an abundance of resources is often associated with poor development outcomes of regions. Research shows that there exists a negative correlation between an abundance of natural resources and sustained economic growth. The explanation for the resource curse varies from country to country but an underlying theme of weak governing institutions prevails where the gains from resource extraction are captured by a few elites.

The resource industry in India has suffered from a variety of similar issues from illegal mining to environmental concerns. It has also over-corrected for these problems as reflected in the Supreme Court ruling to cancel numerous mining leases across the country that has brought the sector to a halt over the last few years. The situation might change with the introduction of the National Mineral Policy 2019 as it might bring more clarity in regulation. Also, addressing the resource curse has more pertinent implications that are of interest to the larger economy.

Mining is a labour-intensive industry. The implication is that the sector has an immense employment-generating potential. As per the 12th Five Year Plan, for every increase in economic growth by 1 percent, the employment created by the mining sector is thirteen times more than agriculture and six times more than manufacturing. Moreover, in a study conducted by Institute for Competitiveness on Vedanta Resources, we estimated that for every job created by the company, there were 17 more jobs created in the economy indirectly.

So, resolving the resource curse and revitalising the resources sector can create crucial job opportunities. The capacity for employment creation within the sector holds the key to India’s perpetual job woes that seem to have reached new lows lately. According to the Periodic Labour Force Survey (PLFS) released earlier this year, unemployment in India reached 6 percent in 2017-18; a 45-year high in absolute terms. The best way to address such concerns is to revitalise a sector like mining where the highest dividends on employment can be achieved.

Another economic aspect that is intricately linked to the resource industry is its contribution to the country’s gross domestic product (GDP). As stated, the non-fuel mineral sector contributes to about 1.53 percent of the country’s GDP. By comparison, in economies of South Africa and Australia, the sector accounts for around 8 percent of the GDP. Therefore, among other efforts that the Indian economy is making to achieve the $5 trillion-mark, a push to drive growth in the resource industry can be extremely helpful.

It is important to note that it is not just the direct impact that will be created within the economy due to growth in the resource industry. There are multiple ripple effects that reverberate throughout the economy when an industry grows. The first is an indirect impact that includes the increase in output of the industry’s suppliers as well as their suppliers down the line. The second level of impact called the induced impact is created beyond businesses through the rise in incomes of industry workers and the resulting demand that they generate.

In the same study referred above, our estimates show that Vedanta alone has a direct impact on the economy that equals about 0.4 percent of the country’s GDP; an indirect impact that amounts up to 1 percent of the country’s economy; and an induced impact that equals about 2.2 percent of India’s GDP. Therefore, small shoots of growth in the economy can amount to an impact on a larger scale. These learnings are crucial for the larger goal of getting a slowing economy back on the growth path. The government should focus on the smallest sectors that hold the potential to create most significant impact in terms of job and economic growth.

The introduction of the National Minerals Policy is a step in the right direction, but policy needs to be completely conducive to driving the growth of the resource industry. The opportunity to leverage upon the sector to drive jobs, growth and opportunity should not be floundered. By enabling labour-intensive growth, India can get its growth story back on track and eliminate poverty at a much faster rate. An unlikely sector of resource mining holds the key.

The article was published with Economic Times on December 26, 2019.