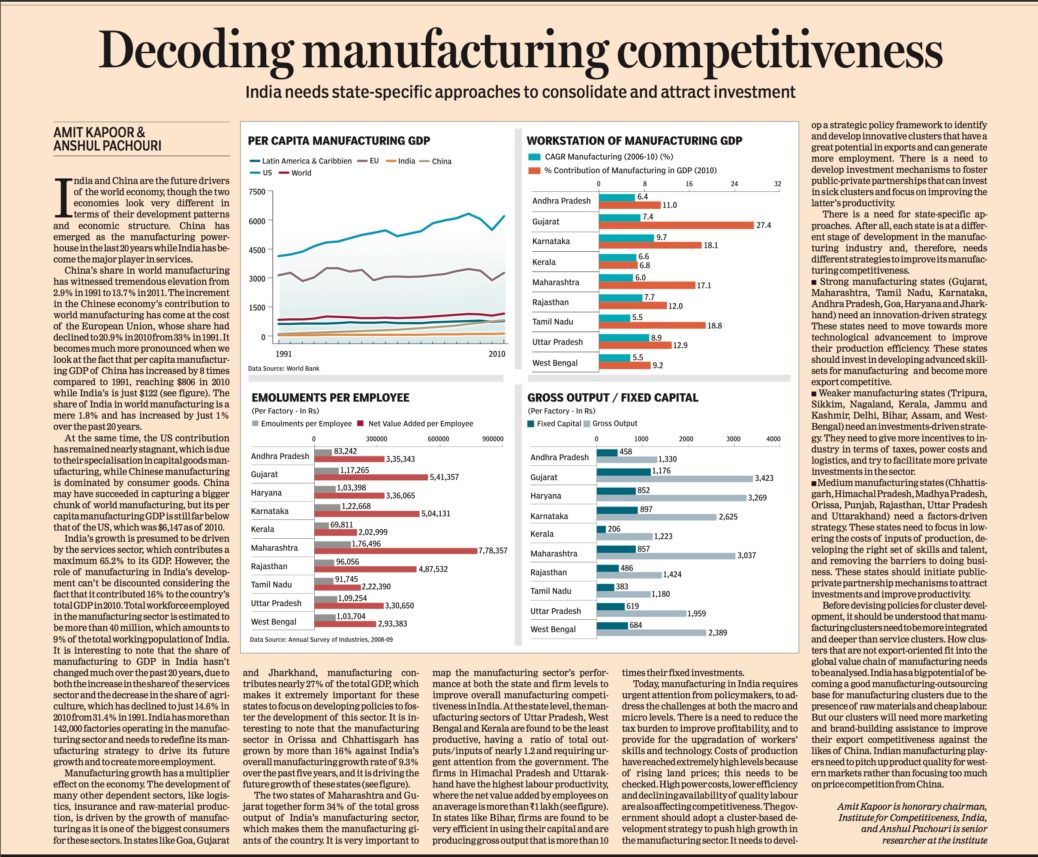 India and China are the future drivers of the world economy, though the two economies look very different in terms of their development patterns and economic structure. China has emerged as the manufacturing powerhouse in the last 20 years while India has become the major player in services.

At the same time, the US contribution has remained nearly stagnant, which is due to their specialisation in capital goods manufacturing, while Chinese manufacturing is dominated by consumer goods. China may have succeeded in capturing a bigger chunk of world manufacturing, but its per capita manufacturing GDP is still far below that of the US, which was $6,147 as of 2010.

India’s growth is presumed to be driven by the services sector, which contributes a maximum 65.2% to its GDP. However, the role of manufacturing in India’s development can’t be discounted considering the fact that it contributed 16% to the country’s total GDP in 2010. Total workforce employed in the manufacturing sector is estimated to be more than 40 million, which amounts to 9% of the total working population of India. It is interesting to note that the share of manufacturing to GDP in India hasn’t changed much over the past 20 years, due to both the increase in the share of the services sector and the decrease in the share of agriculture, which has declined to just 14.6% in 2010 from 31.4% in 1991. India has more than 142,000 factories operating in the manufacturing sector and needs to redefine its manufacturing strategy to drive its future growth and to create more employment.

Manufacturing growth has a multiplier effect on the economy. The development of many other dependent sectors, like logistics, insurance and raw-material production, is driven by the growth of manufacturing as it is one of the biggest consumers for these sectors. In states like Goa, Gujarat and Jharkhand, manufacturing contributes nearly 27% of the total GDP, which makes it extremely important for these states to focus on developing policies to foster the development of this sector. It is interesting to note that the manufacturing sector in Orissa and Chhattisgarh has grown by more than 16% against India’s overall manufacturing growth rate of 9.3% over the past five years, and it is driving the future growth of these states (see figure).

The two states of Maharashtra and Gujarat together form 34% of the total gross output of India’s manufacturing sector, which makes them the manufacturing giants of the country. It is very important to map the manufacturing sector’s performance at both the state and firm levels to improve overall manufacturing competitiveness in India. At the state level, the manufacturing sectors of Uttar Pradesh, West Bengal and Kerala are found to be the least productive, having a ratio of total outputs/inputs of nearly 1.2 and requiring urgent attention from the government. The firms in Himachal Pradesh and Uttarakhand have the highest labour productivity, where the net value added by employees on an average is more than R1 lakh (see figure). In states like Bihar, firms are found to be very efficient in using their capital and are producing gross output that is more than 10 times their fixed investments.

Today, manufacturing in India requires urgent attention from policymakers, to address the challenges at both the macro and micro levels. There is a need to reduce the tax burden to improve profitability, and to provide for the upgradation of workers’ skills and technology. Costs of production have reached extremely high levels because of rising land prices; this needs to be checked. High power costs, lower efficiency and declining availability of quality labour are also affecting competitiveness. The government should adopt a cluster-based development strategy to push high growth in the manufacturing sector. It needs to develop a strategic policy framework to identify and develop innovative clusters that have a great potential in exports and can generate more employment. There is a need to develop investment mechanisms to foster public-private partnerships that can invest in sick clusters and focus on improving the latter’s productivity.

There is a need for state-specific approaches. After all, each state is at a different stage of development in the manufacturing industry and, therefore, needs different strategies to improve its manufacturing competitiveness.

*Weaker manufacturing states (Tripura, Sikkim, Nagaland, Kerala, Jammu and Kashmir, Delhi, Bihar, Assam, and West-Bengal) need an investments-driven strategy. They need to give more incentives to industry in terms of taxes, power costs and logistics, and try to facilitate more private investments in the sector.

*Medium manufacturing states (Chhattisgarh, Himachal Pradesh, Madhya Pradesh, Orissa, Punjab, Rajasthan, Uttar Pradesh and Uttarakhand) need a factors-driven strategy. These states need to focus in lowering the costs of inputs of production, developing the right set of skills and talent, and removing the barriers to doing business. These states should initiate public-private partnership mechanisms to attract investments and improve productivity.

Before devising policies for cluster development, it should be understood that manufacturing clusters need to be more integrated and deeper than service clusters. How clusters that are not export-oriented fit into the global value chain of manufacturing needs to be analysed. India has a big potential of becoming a good manufacturing-outsourcing base for manufacturing clusters due to the presence of raw materials and cheap labour. But our clusters will need more marketing and brand-building assistance to improve their export competitiveness against the likes of China. Indian manufacturing players need to pitch up product quality for western markets rather than focusing too much on price competition from China.

This was published with Financial Expresss on December 9, 2011.