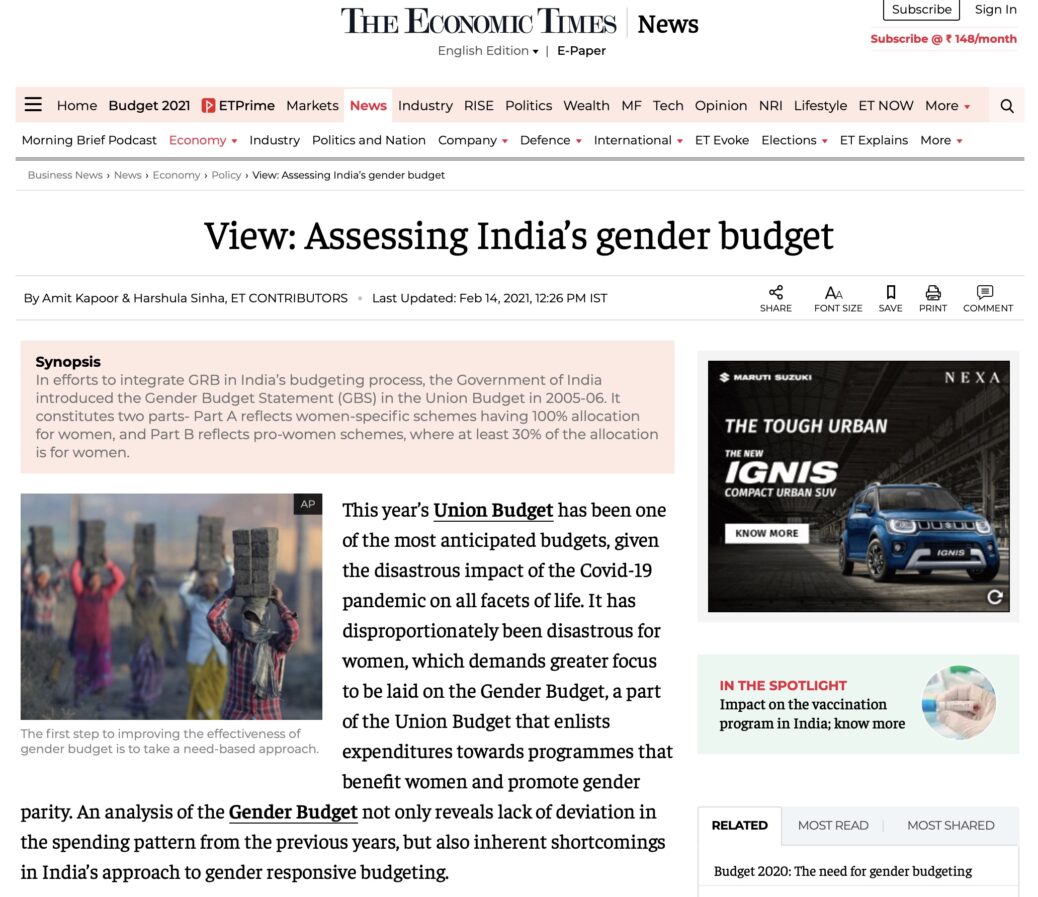 This year’s Union Budget has been one of the most anticipated budgets, given the disastrous impact of the COVID-19 pandemic on all facets of life. It has disproportionately been disastrous for women, which demands greater focus to be laid on the Gender Budget, a part of the Union Budget that enlists expenditures towards programmes that benefit women and promote gender parity. An analysis of the Gender Budget not only reveals lack of deviation in the spending pattern from the previous years, but also inherent shortcomings in India’s approach to gender responsive budgeting.

Gender responsive budgeting (GRB) was popularised in the late 20th century when budgets began to be regarded as a tool to address gender equality. GRB does not entail allocation of funds towards programmes dedicated to women’s affairs, but is rather an approach to budgeting that recognizes the differentiated impact of budget on men and women, and utilises policy guidelines and tools to prepare budgets that are more sensitive towards the needs of women, with a focus on alleviating gender inequality.

In efforts to integrate GRB in India’s budgeting process, the Government of India (GoI) introduced the Gender Budget Statement (GBS) in the Union Budget in 2005-06. It constitutes two parts- Part A reflects women-specific schemes having 100% allocation for women, and Part B reflects pro-women schemes, where at least 30% of the allocation is for women.

In 2005-06, the Gender Budget constituted 4.8% of the total budget outlay, but over the years, its proportion in the budget has close to stagnated, hovering around 5%. In the last financial year, the Gender Budget stood at Rs 1,43,462 crore or 4.72% of the total budget. The actual expenditure increased to Rs 2,07,261 crore, reflecting the government’s gender-sensitive response to COVID. The post-pandemic situation continues to be disproportionately disadvantageous for women, but the Gender Budget as a proportion has fallen to 4.4% in the 2021-22 Union Budget, which is Rs 1,53,326 in absolute terms.

The budgetary provision may turn out to be inadequate to account for the disproportionate job losses faced by women, the spike in dropout rates of girls further exacerbated by gender gaps in access to digital tools, the rise in cases of domestic abuse during the lockdown, the disruption to reproductive and maternal health services faced due to closure of Anganwadi centres, and so on.

It is particularly concerning as India has lots of grounds to cover with regards to its gender equality goals. Some worrying trends are our falling female labour force participation rate (LFPR), and India’s 112th rank among 153 countries in the World Economic Forum’s Global Gender Gap Index 2020, which slipped from 108th position in 2018. These pre-COVID trends warrants us to revisit India’s fundamental approach to GRB as well.

An analysis of the India’s budgeting exercises shows that there are limitations in GBS that cause sub-optimal outcomes. Studies examining the design and methodology adopted in India’s gender budgeting point out that the lack of outcome-oriented budgeting often turns it into more of an accounting exercise while the central goal of achieving gender parity takes a back seat. GRB is not as simple as disaggregating the budget by gender, but is a more diverse set of efforts aimed at making government’s planning, budgeting and auditing contribute to gender equality. In order to make more effective and outcome-oriented gender budget, Debbie Budlender’s following five-step framework for GRB can be considered: (a) Analysing the situation of women, men, girls and boys; (b) Assessing the gender-responsiveness of policies; (c) Assessing if budgetary allocations are adequate; (d) Monitoring spending and service delivery; and (d) Assessing outcomes.

Hence, the first step to improving the effectiveness of GRB is to take a need-based approach. Accordingly, priority areas where gender inequalities are the most severe need to be identified for targeted spending. Complementary to defining targets is monitoring the outcomes. To that end, accountability systems need to be set up to conduct gender auditing of centrally sponsored schemes and programmes for women for measuring progress.

Additionally, a closer look at the components of India’s gender budget raises the question of whether they can indeed be counted among efforts towards correcting gender imbalances in modern times. Funds directed towards research projects on home science, assistance for marriage, LPG connection to poor households and other such programmes that reinforce the traditional gender roles of women do benefit women who are conforming to their gender roles, but the inclusion of these components in a gender budget could become contentious as ideas of women empowerment evolve. The adoption of GRB by the GoI has indisputably been a landmark move towards achieving gender equality, but at the same, it is beneficial for the approach to evolve in line with the evolution of feminist theories.

According to economist Nirmala Banerjee, “we need to push for policies that not merely assist women to fulfil their traditional roles, but also to promote them in roles that will change existing gender positions.” In order to ensure that programmes do substantially lead to better outcomes for women, Banerjee proposes categorizing expenditures on public schemes for women under three heads: Relief policies that do not address structural problems; Gender reinforcing assistance, which simply assist women for their needs in accepted gender roles; and lastly, Empowering schemes, which serve to alleviate gender-based disadvantages faced by women.

There are also methodological inaccuracies noted in the GBS since its inception. For instance, certain schemes that are reported in part A of the statement are not exactly schemes targeted at women or have women as 100% of the beneficiaries. For example, expenditure on Research Studies by ICMR under the Department of Health Research is featured in part A of the FY22 Gender Budget even though there is no clarity as to how it has 100% women beneficiaries or how it contributes to women empowerment and correcting gender imbalances. In the previous iterations of the budget, the erstwhile Indira Awas Yojana used to feature in part A, even though its beneficiaries are both men and women. The fact that this inaccuracy has been rectified now gives hope that India’s Gender Budget would continue to evolve in line with new learnings and recommendations.

Despite some of its shortcomings, GBS is still an institutionalised tool that has allowed policymakers to assess how much the government spends on women’s empowerment, and is a reflection of India’s sincere efforts towards achieving its gender equality goals. It is because of a tool like GBS that civil society organisations and women’s rights activists are able to pitch for greater expenditure for women. At the same time, there is also a need to revisit our approach from time to time, and tailor our budgeting practices to suit the emergent needs and trends.

The article was published with Economic Times on February 14, 2021.