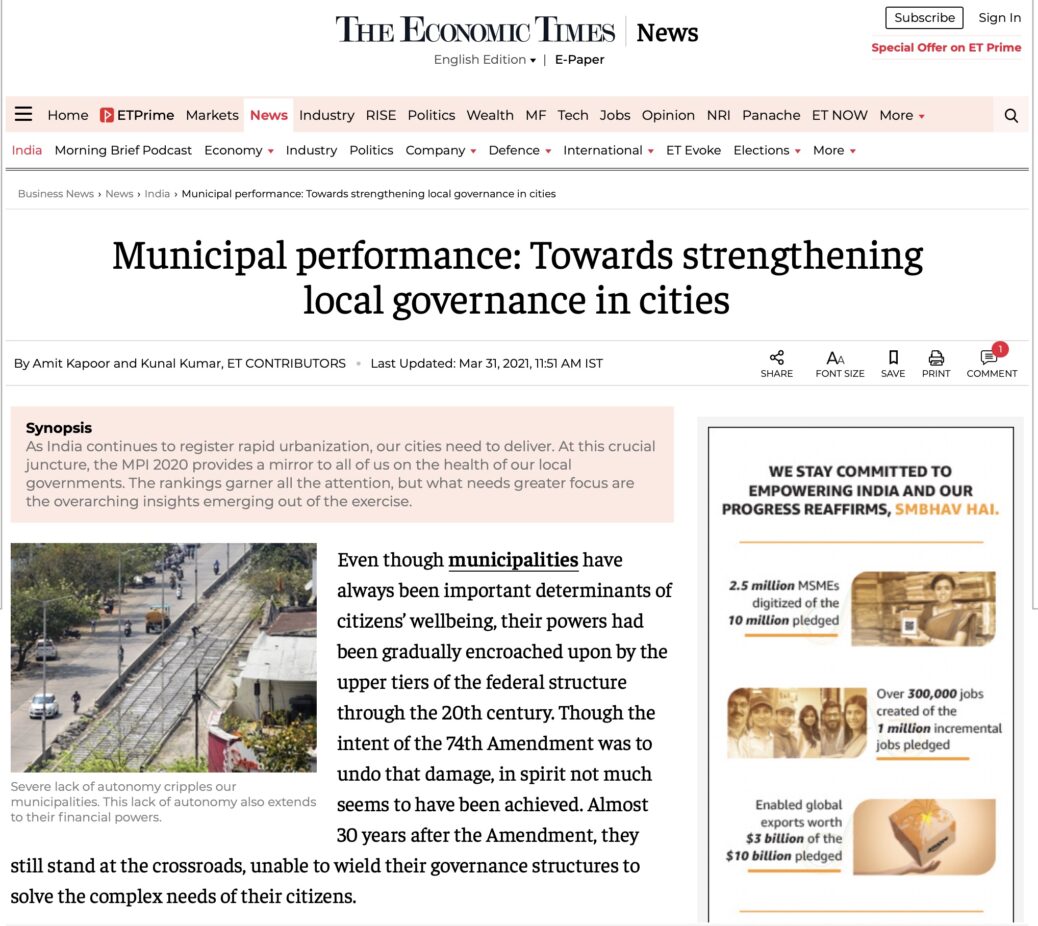 Even though municipalities have always been important determinants of citizens’ wellbeing, their powers had been gradually encroached upon by the upper tiers of the federal structure through the 20th century. Though the intent of the 74th Amendment was to undo that damage, in spirit not much seems to have been achieved. Almost 30 years after the Amendment, they still stand at the crossroads, unable to wield their governance structures to solve the complex needs of their citizens.

What ails our municipalities? Who runs our cities? What needs to be done to transform their effectiveness, responsiveness and agility? These are questions that as Indians, we all need to find answers to collectively. A collective search for answers, needs to be in the form of an informed debate. It is important that data about their performance is collected on common, comparable benchmarks and disseminated to people to begin that process.

The accelerated rate of urbanization taking place in India demands better policies, planning and governance. The Government of India, State Governments and other public and private entities  implement a bunch of programmes which impact quality of life in urban areas. However, it is the local governments that are, in many ways, the key instruments in ensuring their success. Surely, measuring their capability to play that role should be a high priority for the country.

It was on this background that the Ministry of Housing and Urban Affairs released India’s first-ever Municipal Performance Index (MPI). The MPI ranks 111 municipalities on the basis of their functioning across five key vertical of Services, Finance, Planning, Technology, and Governance. These verticals comprise 20 sectors and 100 indicators. This exercise endeavours to support the process of informed debate, foster competitiveness among cities, and provide them a roadmap to improve their performance.

The municipal corporations assessed showcase a broad range of index scores, spanning from 66.08 to 12.07, with the average coming to 43.13. This suggests that there is still a lot of room for improvement, and that they have immense latent potential. The population size of a city is an important differentiator in terms of the performance of the municipal bodies. Hence, the index categories the municipalities into two categories: Million+ Municipalities (municipalities having over a million population) and Less than Million Municipalities (municipalities having less than a million population). Under the first category of Million+ municipalities, Indore has emerged as the top performer with a score of 66.08, followed by Surat (60.82) and Bhopal (59.04). These cities have also topped the overall index. In the second category, New Delhi MCD has topped the ranking with a score of 52.92 2, closely followed by Tirupati (51.69) and Gandhinagar (51.59).

Besides promoting competitiveness, the index also promotes peer-to-peer learning. For instance, other municipalities can emulate the best practices of top achievers, Indore and NDMC. Hidden beneath the average scores, there is considerable variance in scores among the verticals. Municipalities have performed the best in Services, with a national average of 52.13, which implies that the service delivery mechanism of a majority of municipalities is their strongest suit. On the other hand, Technology has emerged as the lowest-scoring vertical with a score of 24.02, which suggests a low use of digital technology.

An observation of concern is the regional disparity reflected in the rankings. Municipalities from the southern and western parts of the country dominate the top ranks, while municipalities in the north-eastern, northern and eastern parts of the country have featured low in the rankings. This is a reminder of long-persisting regional disparities wherein the more prosperous cities located in western and southern India have continued to reap benefits of serving as financial and industrial hubs from colonial times, while the historically backward regions have fallen behind. The fact that India continues to face this challenge even seven decades after independence calls for serious steps towards corrective action.

Delving deeper into the findings of the index reveals some more fascinating insights that the policymakers can utilize to improve urban governance. The analyses clearly show that effective decentralization is yet to be realized in cities. Even though the 12th Schedule of the Constitution identifies 18 areas that fall under the purview of municipalities, States have done little to devolve commensurate powers to enable them to deliver on their responsibilities. For example, education and health are two areas of urban development where a significant number of city governments were found not to have jurisdiction over. Economic and Social Development clearly come out to be highly neglected aspects in municipal governance.

Severe lack of autonomy cripples our municipalities. This lack of autonomy also extends to their financial powers. The lack of financial autonomy restricts their ability to effectively provide services. ULBs that are better equipped to access financial resources and manage them are able to govern better, and provide better services to their citizens.

As India continues to register rapid urbanization, our cities need to deliver. At this crucial juncture, the MPI 2020 provides a mirror to all of us on the health of our local governments. The rankings garner all the attention, but what needs greater focus are the overarching insights emerging out of the exercise. Together, we can leverage MPI 2020 to ignite action towards transforming our urban local bodies into true local self governments, as envisaged in the 74thAmendment.

The article was published with Economic Times on mArch 31, 2021.