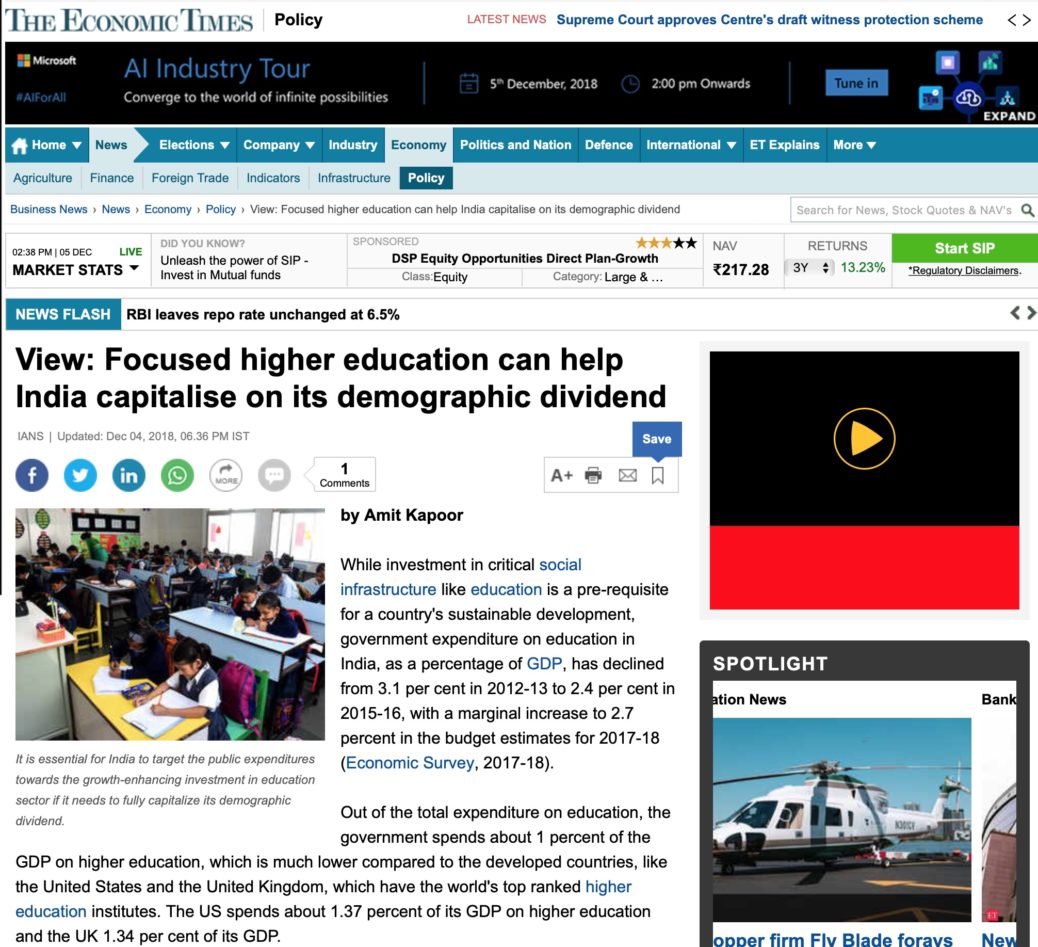 While investment in critical social infrastructure like education is a pre-requisite for a country’s sustainable development, government expenditure on education in India, as a percentage of GDP, has declined from 3.1 per cent in 2012-13 to 2.4 per cent in 2015-16, with a marginal increase to 2.7 percent in the budget estimates for 2017-18 (Economic Survey, 2017-18).Out of the total expenditure on education, the government spends about 1 percent of the GDP on higher education, which is much lower compared to the developed countries, like the United States and the United Kingdom, which have the world’s top ranked higher education institutes. The US spends about 1.37 percent of its GDP on higher education and the UK 1.34 per cent of its GDP.

Although increasing the government spending on education does not guarantee improved performance of the education institutes, which depends upon a multitude of other factors, it is a necessary factor in stimulating their development and making them globally competitive.

While, the central government’s expenditure on higher education increased from Rs 15, 472 crore in 2010-11 to Rs 34, 862 crore in 2017-18, followed by a 0.4 per cent increase in the allocation for 2018-19, the funds seem to be inadequate with regard to the growth projections for the higher education system in terms of student enrolment, and also for quality enhancement.

Another issue India’s higher education system faces is the persistent gap between the projected demand for funds and the actual allocations made. In the budget estimates for 2018-19, only about 55 percent of the funds demanded were allocated for higher education, making it difficult to achieve the desired excellence in the sector.

Further, institution-wise allocation of funds suggests, that about half are given to central universities (as grants), Indian Institutes of Technology (IITs), and regulatory authorities (UGC and AICTE), leaving very small amounts for state universities and their affiliated colleges.

To address the issues of equity, access and excellence in state higher education institutes, the central government launched Rashtriya Uchchatar Shiksha Abhiyan (RUSA) scheme in 2013, under which eligible state universities and colleges are entitled to receive central funding in the ratio of 60:40 (central:state share) for the general category states, 90:10 for special category states, and 100 per cent for union territories. While the funds allocated for RUSA increased by 8 per cent in the budget estimates for 2018-19 over the revised estimates of 2017-18, indicating greater central government support to the state higher education institutions, one of the issues which needs to be dealt with is the low percentage of grants being utilised. As on the September 30, 2017, only about 24.7 percent of the central government funds were utilised under the RUSA scheme.

It is essential for India to target the public expenditures towards the growth-enhancing investment in education sector if it needs to fully capitalize its demographic dividend. There exists a persistent gap between the funds demanded by the higher education institutes and the funds allocated to them. It is imperative to close this gap to bring excellence in the system.

Further, it is also important for the education institutions to appropriately chart their projected expenditure so that the funds allocated by the government do not remain underutilised. While, increasing the public spending on the education is important for achieving the growth projections for student enrolment and quality improvement, it is also crucial to make optimal usage of these funds so that efficiency of public investment increases.

As for the state universities, which comprise the majority share in the university and college enrolments, given the funding constraints on the state budgets, the RUSA scheme looks promising as long as the central government’s share is released completely and also utilised appropriately by the state-level institutions.

The article was published with Economic Times and Daily Hunt on December 4, 2018.